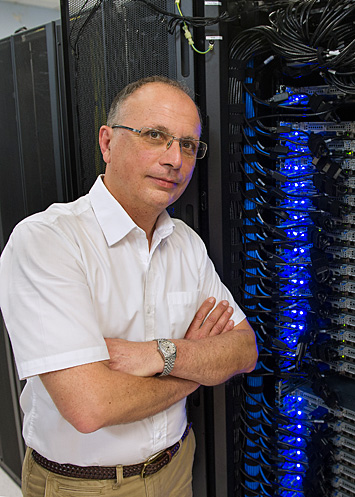 Eric Lançon in the computing room at the Scientific Data and Computing Center.

UPTON, NY—Eric Lançon, a physicist who has played major roles in computing efforts for the Large Hadron Collider (LHC) at the European Organization for Nuclear Research (CERN), has been named Director of the Scientific Data and Computing Center at the U.S. Department of Energy's (DOE) Brookhaven National Laboratory, effective July 1, 2016. He succeeds Michael Ernst, who retired from Brookhaven Lab in June 2016.

As director, Lançon oversees an integrated computing, data storage, and networking infrastructure that is part of Brookhaven's Computational Science Initiative (CSI). Under this initiative, scientists are developing solutions for efficiently analyzing the vast amount of scientific data being generated at Brookhaven's DOE Office of Science User Facilities and by national and international research collaborations.

"A professionally operated, state-of-the-art data, computing, and network infrastructure is paramount to the success of CSI," said CSI Director Kerstin Kleese van Dam. "With Eric, we have an incredibly experienced leader who knows how to create and operate computing environments that enable scientific progress and discovery at the leading edge."

The center houses the Relativistic Heavy Ion Collider (RHIC) and ATLAS Computing Facility (RACF). This world-class facility is at the core of a global computing network connecting more than 2,500 researchers with data from the STAR and PHENIX detectors at RHIC—a DOE Office of Science User Facility for nuclear physics research—and the LHC's ATLAS detector, which is being used in an international particle physics experiment that seeks to understand the basic forces that shaped the early universe. More than 50,000 computing cores process the petabytes of data resulting from the millions of particle collisions that take place each second at RHIC and the billions at ATLAS. The center also houses Brookhaven's institutional computing system, New York State­–funded operational data-intensive computing systems, and novel architecture research systems, as well as computing and data services operated for other third-party clients.

One of Lançon's responsibilities is to manage the U.S. ATLAS Tier 1 computing center at Brookhaven—the only such center in the United States and the largest one in the world. This center provides 23 percent of the total ATLAS computing resources for U.S. collaborators and serves as the central hub for storing, processing, and distributing data from the ATLAS experiment. Lançon is also responsible for five U.S. ATLAS Tier 2 centers at nine universities and at DOE's SLAC National Accelerator Laboratory; these centers store the data and perform specific analysis tasks.

"I look forward to expanding the Scientific Data and Computing Center to accommodate new computing capabilities, such as high-performance computers with GPUs [graphics processing units] that accelerate computations and single computer chips with more and more processors," said Lançon. "Integrating these capabilities into the center while continuing to host state-of-the-art computing hardware for the RHIC and ATLAS experiments at the same level of efficiency will be a challenge—one that I am excited to take on."

Prior to his new role, Lançon served as elected computing coordinator of the ATLAS experiment, chaired the ATLAS International Computing Board, led the French computing activities for the ATLAS experiment, and co-led the development of software for identifying muons (tiny subatomic particles that only last for 2.2 millionths of a second before disintegrating) in the ATLAS detector. He also initiated the ATLAS@Home research project that uses computing power from around the world to run simulations of the ATLAS experiment at CERN. In 2015, Lançon and his research team were awarded by the Chinese Academy of Sciences with the first-place prize for developing a supercomputer infrastructure that enabled them to use China's supercomputer network to participate in the ATLAS simulation effort.

Before becoming involved in the ATLAS collaboration, Lançon worked on the ALEPH experiment, which sought to explore the physics predicted by the Standard Model and to search for new physics.

Lançon is an executive team member of the Open Science Grid, a high-throughput distributed computing infrastructure for large-scale scientific research, including the ATLAS experiment.

Lançon received his Ph.D. in high-energy physics and his doctorat d'Ètat (habilitation), both from Paris Diderot University.