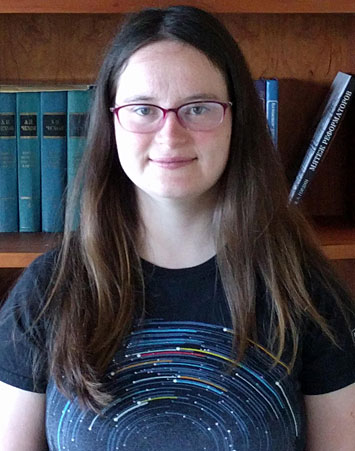 UPTON, NY — Kathryn Meehan, a student from the University of California-Davis, has been awarded the 2016 Gertrude Scharff-Goldhaber Prize, consisting of $1,000 and a certificate. Funded by Brookhaven Science Associates, the company that manages Brookhaven National Laboratory for the U.S. Department of Energy, the award was established in 1992 by Brookhaven Women in Science (BWIS), a nonprofit organization that supports and encourages the advancement of women in science.

The award recognizes substantial promise and accomplishment by female graduate students in physics who are performing their thesis research at Brookhaven Lab. It commemorates the outstanding contributions of the late nuclear physicist Gertrude Scharff-Goldhaber. In 1950, Goldhaber became the first female Ph.D. physicist appointed to the Brookhaven Lab staff. She also was a founding member of BWIS.

Meehan is helping lead the fixed-target program — aiming a beam at a stationary target to see what particle interactions occur — at the STAR detector at Brookhaven Lab's Relativistic Heavy Ion Collider (RHIC). The STAR detector specializes in tracking the thousands of particles produced by each ion collision at RHIC. Weighing 1,200 tons and as large as a house, STAR is used to search for signatures of the form of matter that RHIC was designed to create: quark-gluon plasma (QGP). Detecting and understanding the QGP will help us to better understand the universe in the moments after the Big Bang.

Meehan's thesis research focuses on comparing results from STAR's first dedicated fixed-target test run with results from Brookhaven's Alternating Gradient Synchrotron (AGS), a particle accelerator that receives protons and other ions from the AGS booster and delivers them to RHIC after acceleration. This research may provide important information leading to the groundwork for future fixed-target experiments.

Meehan earned her B.S. in Physics and Astronomy at Haverford College in Pennsylvania and is currently a Ph.D. Candidate at the University of California-Davis. She also serves as a student representative on the Users' Executive Committee.