This news release was issued today by MIT. The research team used a transmission electron microscope at the Center for Functional Nanomaterials (CFN), a U.S. Department of Energy Office of Science User Facility at Brookhaven National Laboratory, to observe the behavior of a perovskite oxide exposed to water vapor. Eric Stach, leader of the CFN's Electron Microscopy Group, and Andrew Gamalski, a Brookhaven Goldhaber Postdoctoral Fellow in Stach's group, were part of the research team. 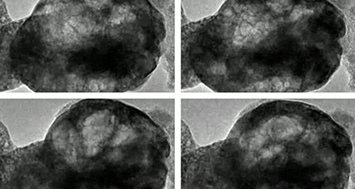 These images, taken from a transmission electron microscope, show a perovskite material oscillating as it is exposed to water vapor and a beam of electrons.

When one type of an oxide structure called perovskite is exposed to both water vapor and streams of electrons, it exhibits behavior that researchers had never anticipated: The material gives off oxygen and begins oscillating, almost resembling a living, breathing organism.

The phenomenon was "totally unexpected" and may turn out to have some practical applications, says Yang Shao-Horn, the W.M. Keck Professor of Energy at MIT. She is the senior author of a paper describing the research that is being published today in the journal Nature Materials. The paper's lead author is Binghong Han PhD '16, now a postdoc at Argonne National Laboratory.

Perovskite oxides are promising candidates for a variety of applications, including solar cells, electrodes in rechargeable batteries, water-splitting devices to generate hydrogen and oxygen, fuel cells, and sensors. In many of these uses, the materials would be exposed to water vapor, so a better understanding of their behavior in such an environment is considered important for facilitating the development of many of their potential applications.

When a particular kind of perovskite known as BSCF — after the chemical symbols for its constituents barium, strontium, cobalt, and iron — is placed in a vacuum in a transmission electron microscope (TEM) to observe its behavior, Shao-Horn says, "nothing happens, it's very stable." But then, "when you pump in low pressure water vapor, you begin to see the oxide oscillate." The cause of that oscillation, clearly visible in the TEM images, is that "bubbles form and shrink in the oxide. It's like cooking a polenta, where bubbles form and then shrink."

The behavior was so unexpected in part because the oxide is solid and was not expected to have the flexibility to form growing and shrinking bubbles. "This is incredible," Shao-Horn says. "We think of oxides as brittle," but in this case the bubbles expand and contract without any fracturing of the material. And in the process of bubble formation, "we are actually generating oxygen gas," she says.

What's more, the exact frequency of the oscillations that are generated by the forming and bursting bubbles can be precisely tuned, which could be a useful feature for some potential applications. "The magnitude and frequency of the oscillations depend on the pressure" of the vapor in the system, Shao-Horn says. And since the phenomenon also depends on the presence of electron beams, the reaction can be switched on and off at will by controlling those beams.

The effect is not just a surface reaction, she says. The water molecules, which become ionized (electrically charged) by the electron beam, actually penetrate deep into the perovskite. "These ions go inside the bulk material, so we see oscillations coming from very deep," she says.

This experiment used the unique capabilities of an "environmental" transmission electron microscope at Brookhaven National Laboratory, part of a U.S. Department of Energy-supported facility there. With this instrument, the researchers directly observed the interaction between the perovskite material, water vapor, and streams of electrons, all at the atomic scale.

Despite all the pulsating motion and the penetration of ions in and out of the solid crystalline material, when the reaction stops, the material "still has its original perovskite structure," Han says.

Because this is such a new and intriguing finding, Shao-Horn says, "we still don't understand in full detail" exactly how the reactions take place, so the research is continuing in order to clarify the mechanisms. "It's an unexpected result that opens a lot of questions to address scientifically."

While the initial experiments used electron beams, Shao-Horn questions if such behavior could also be induced by shining a bright light, which could be a useful approach for water splitting and purification — for example, using sunlight to generate hydrogen fuel from water or remove toxins from water.

While most catalysts promote reactions only at their surfaces, the fact that this reaction penetrates into the bulk of the material suggests that it could offer a new mechanism for catalyst designs, she says.

In addition to mechanical engineering, Shao-Horn holds joint appointments with the Department of Materials Science and Engineering and the MIT Energy Initiative's Center for Energy Storage. The research team also included Kelsey Stoerzinger PhD '16; Vasili Tileli of the Ecole Polytechnique Federale de Lausanne, in Switzerland; and Andrew Gamalski and Eric Stach of Brookhaven National Laboratory, in Upton, New York. The work was supported by the National Science Foundation, the Skoltech-MIT Center for Electrochemical Energy Storage, and the U.S. Department of Energy Office of Science.