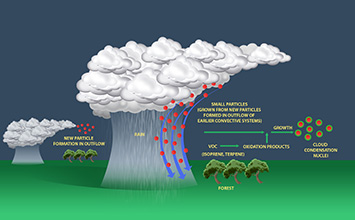 Scanning the pristine skies above the Amazon rainforest revealed that small aerosol particles that form naturally in the upper atmosphere are carried to the lower atmosphere by rapid downdrafts associated with rainfall. There, volatile organic compounds (VOCs) emitted by trees react with oxidants, and the oxidation products condense on the small particles and make them grow into the "nuclei" around which clouds form. Studying this process in a clean environment will help scientists improve their understanding of the effects of industrial era emissions on climate. Credit: Luiz. A. T. Machado, National Institute for Space Research, São José dos Campos, São Paulo, Brazil

UPTON, NY — Understanding how tiny particles emitted by cars and factories affect Earth's climate requires accurate climate modeling and the ability to quantify the effects of these pollutant particles vs. particles naturally present in the atmosphere. One large uncertainty is what Earth was like before these industrial-era emissions began. In a paper just published in Nature, scientists collaborating on the GoAmazon study describe how they tracked particles in the largely pristine atmosphere over the Amazon rainforest, which has given them a way to effectively turn back the clock a few hundred years.

The scientists, sponsored in part by the U.S. Department of Energy's (DOE) Atmospheric Radiation Measurement (ARM) Climate Research Facility and DOE's  Atmospheric System Research (ASR) Program, collected and analyzed data over the Amazon during 2014-15. By scanning the skies at different altitudes and measuring the changes in particle population over time, the scientists figured out the source of the tiny particles that trigger cloud formation under "pre-industrial" conditions.

The analysis described in the Nature paper, led by scientists from DOE's Brookhaven National Laboratory, reveals that in the skies above the Amazon, large numbers of small aerosol particles that form naturally in the upper atmosphere are carried to the lower atmosphere, known as the "boundary layer," by rapid downdrafts associated with rainfall. Then, in the boundary layer, where volatile organic compounds emitted by trees react with oxidants, the oxidation products condense on these small particles and make them grow into the "nuclei" around which clouds form.

"In many other places we know that these cloud-forming particles are coming directly from emissions from cars and factories, or formed as industrial gas molecules condense to form new particles," said Brookhaven Lab atmospheric chemist Jian Wang, one of the leaders of the study. "But in the Amazon, there are clean conditions—no cars, no factories—which means we can study this pristine environment to see what Earth was like before the industrial era in order to quantify what the change is. Our measurements will improve how these key atmospheric processes are represented in climate models."

From particles to clouds 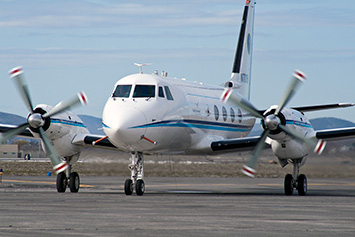 Most clouds—the ones that produce shade and high reflectivity and have the biggest potential impact on climate—form near Earth's surface. In the Amazon, the process starts with particles measuring about 20 to 40 nanometers in diameter. At ground level, these small particles grow by condensation of oxidized organics to the size needed to seed the formation of clouds as they rise in the atmosphere, Wang explained.

"Studies show that no new particle formation happens in the boundary layer, the lowest part of the atmosphere," Wang said. "Plus, it rains a lot in the Amazon, and rain washes lots of particles out of the boundary layer."

In the absence of the industrial sources, and with all the rain, where are the small particles in the Amazon boundary layer coming from? The GoAmazon scientists hypothesized that the particles might be coming from higher up in the atmosphere, where cold temperatures make it much easier for vapor molecules to condense and form tiny particles. But how do they get down to the boundary layer? 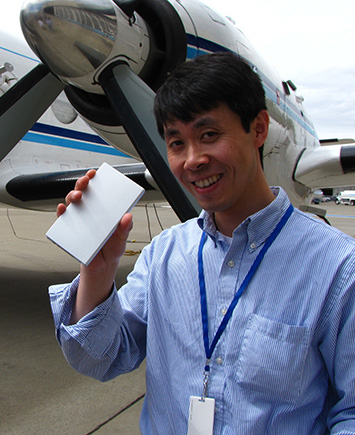 Brookhaven Lab atmospheric chemist Jian Wang, one of the leaders of the study reported in Nature. Credit: ARM

To find out, the scientists measured the numbers and sizes of particles at various altitudes above a pristine region of the Amazon rainforest using a DOE ARM Climate Research Facility research aircraft operated by Pacific Northwest National Laboratory. The aircraft was outfitted with aerosol sampling equipment and instruments for tracking key meteorological variables. These tools included a Fast Integrated Mobility Spectrometer designed and built at Brookhaven that could make aerosol measurements rapidly, which was absolutely essential given the speed of the aircraft.

"We conducted several flights, starting in the boundary layer to altitudes of 2,000 to 3,000 meters, climbing level by level into the 'lower free troposphere'—5 to 6 kilometers above the surface," Wang said.

The scientists also gathered data from ground instruments set up and maintained by collaborators from Germany and Brazil, and cloud radar measurements from an ARM mobile facility. These data allowed them to monitor how the particles at ground level changed after rainfall, and measure how air masses move as a storm passes by.

Before a rainstorm, Wang said, the ground instruments measured a lot of big particles and few small. "After the rain, we have the opposite: The big particles were 'rained out'—but at the same time we see a lot of small particles appear at ground level, just like those the G-1 had measured in the lower free troposphere."

...in the Amazon, ... we can study this pristine environment to see what Earth was like before the industrial era...

These observations were backed up by estimates based on the radar data of how much air (and how many particles) should move from layer to layer in the downdrafts associated with the rain. Additional detailed statistical analyses confirmed that rapid, sporadic downdrafts associated with precipitation carried sufficient numbers of small particles from the lower free troposphere to the boundary layer to create a fresh population of the particles that would eventually seed the formation of new clouds after each rainstorm.

"This sounds like a simple story, but you could not get to these conclusions with just a single measurement," said Wang. "We needed all the collaborators conducting these simultaneous measurements in all these places—the layers of the atmosphere, the radar, and on the ground—to fit it all together."

The implications, he added, may go beyond the tropics and relate to many continental sites 200-300 years ago, in the pre-industrial era. "We have plenty of experiments making measurements of the atmosphere today. That's much better understood compared to what we know about how things were 300 years ago. But with this study, we now have measurements we can use as a baseline that will help us understand the effects of industrialization."

The GoAmazon field campaign was led in the U.S. by Harvard University and in Brazil by a consortium of Brazilian and German research groups. Scientists from Finland and Sweden also participated in the study. The ARM Climate Research Facility is a DOE Office of Science User Facility.

The research was funded by the DOE Office of Science; the Amazonas State Research Foundation (FAPEAM); the São Paulo Research Foundation (FAPESP); the Brazil Scientific Mobility Program; the German Max Planck Society; and the German Federal Ministry of Education and Research. The ARM Facility is operated by nine Department of Energy national laboratories including Brookhaven Lab and the Pacific Northwest National Laboratory.