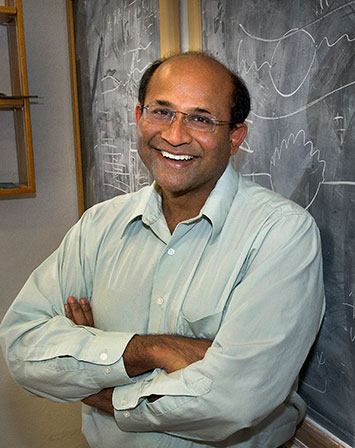 UPTON, NY — Raju Venugopalan, a senior physicist at the U.S. Department of Energy's Brookhaven National Laboratory and an adjunct professor at Stony Brook University, has been awarded a Humboldt Research Award for his remarkable achievements in theoretical nuclear physics. This prestigious international award—issued by the Alexander von Humboldt Foundation in Bonn, Germany—comes with a prize of €60,000 (nearly $70,000 U.S.) and the opportunity to collaborate with German researchers at Heidelberg University and elsewhere. Venugopalan joins 13 other Brookhaven National Laboratory researchers who have received this award since 1974.

"This is a great honor and I'm delighted to be in the company of other Humboldt winners over the past years," Venugopalan said. "This award gives me a wonderful opportunity to build on and establish new collaborations with my colleagues in Germany, where I've been on sabbatical at the Institute for Theoretical Physics at Heidelberg University for the past year. I look forward to widening and deepening these connections."

Venugopalan's work is focused on developing theories to explain and predict the behavior of extreme forms of nuclear matter—including the several-trillion-degree soup of quarks and gluons, known as quark-gluon plasma (QGP), generated in energetic particle collisions at colliders like Brookhaven Lab's Relativistic Heavy Ion Collider (RHIC) and Europe's Large Hadron Collider (LHC). He's also explored the behavior of matter at the opposite temperature extreme, namely in ultra-cold atomic gases.

"Quark-gluon plasma has remarkable properties—like extraordinarily low friction, strong interactions among its constituent particles, and patterns of flow—that are different from what we observe in ordinary matter," he explained. "And there are intriguing connections we see across different systems—from the hottest matter ever created in a laboratory to the coldest atomic gases. The microscopic interactions and particles that make up these systems are completely different, but the collective properties can be described by the same equations."

This award gives me a wonderful opportunity to build on and establish new collaborations with my colleagues in Germany.

For example, both systems undergo a similar sort of evolution as they expand from a vastly chaotic state toward equilibrium. "Expanding cold atoms behave the same way as QGP," Venugopalan said, noting that the particles of each system momentarily get "stuck" in an eddy-like state along the way. "It's as if you pushed all the particles in a room into one corner, then let them expand, but along the way, they get caught up in a swirling twister for a while before spreading to fill the room evenly," he said. "How and why that is so is one of the big mysteries."

The similarities suggest that studies of one system may help scientists better understand the other. "Can we reengineer tabletop experiments on cold atomic gases in ways that will offer insight into the much more complicated equations of quantum chromodynamics (QCD), the theory that describes the behavior and interactions of subatomic quarks and gluons?"

Venugopalan will attend a workshop at Bad Honnef in Germany this December that will bring researchers worldwide together to discuss these ideas. He has also been exploring such topics as an external member of an interdisciplinary collaboration on Isolated Quantum Systems (ISOQUANT) at the University of Heidelberg. The Humboldt award will enable him to continue this work both in Germany and in the U.S.

"The award gives me more flexibility to work with other people," Venugopalan said. 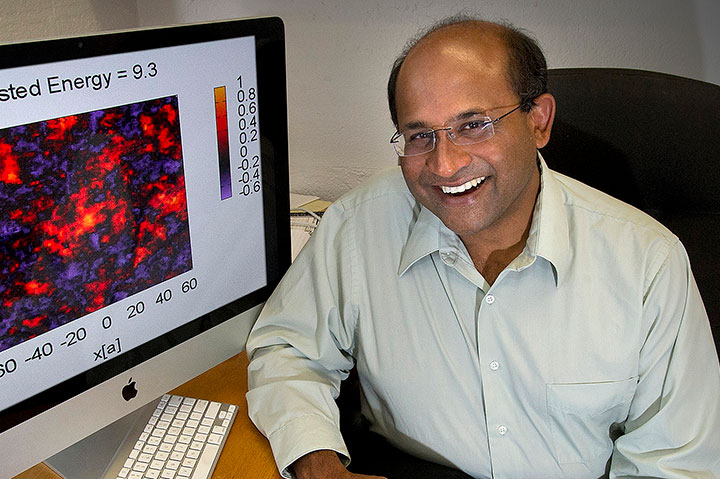 "The Award from the Humboldt Foundation is a great honor for Raju and Brookhaven Lab," said Associate Laboratory Director Berndt Mueller. "One of the great advantages of this award is the opportunity to bring students and postdocs from Germany to Brookhaven, which helps strengthen our research program here as well as our international connections."

Raju Venugopalan came to Brookhaven Lab as an Assistant Physicist in 1998. He rose through the ranks, receiving a tenure appointment in 2002, and has held the title of Senior Scientist since 2007. From 2010 to 2015 he served as Group Leader of the Lab's Nuclear Theory Group, ranked highest among 62 DOE-supported university and lab groups during that time. Venugopalan took a sabbatical as an Excellence Initiative Guest Professor at Heidelberg University's Institute for Theoretical Physics from 2015-2016, and returned to his Group Leader role this fall. Since 2009, he has also served as an adjunct professor at Stony Brook University, the institution that granted him his Ph.D. in 1992. Prior to joining Brookhaven, Venugopalan held post-doctoral appointments at the University of Minnesota (1992-94), the University of Washington (1994-96), and the Niels Bohr Institute, Copenhagen (1997-98). He has authored more than 130 scientific papers and served on numerous scientific committees, including the U.S. Nuclear Science Advisory Committee. He is a Fellow of the American Physical Society, and has received several research fellowships, including one from the Humboldt Foundation (2004-2005).

RHIC is a DOE Office of Science User Facility.