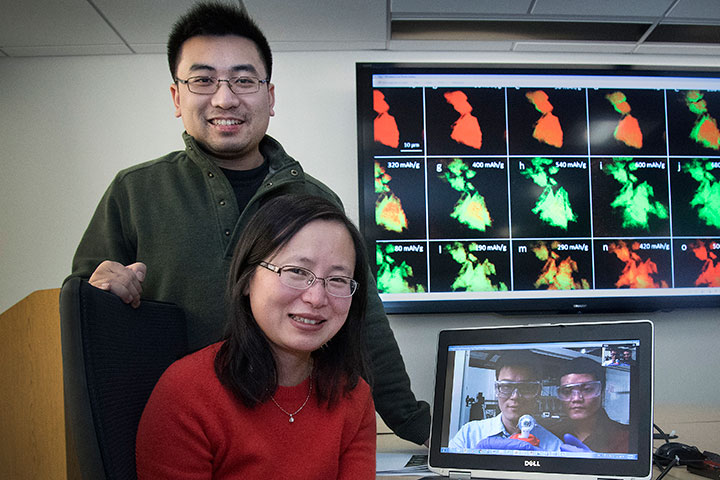 Jun Wang (sitting), Christopher Eng (standing), Jiajun Wang (left, laptop screen), and Liguang Wang of Brookhaven National Laboratory used transmission x-ray microscopy combined with spectroscopy to produce the colored maps shown on the large screen. These maps reveal the structural expansion (and the resulting cracks/fractures) and chemical composition changes that occur as sodium ions (Fe, green) are added to and removed from iron sulfide (FeS, red) during the battery's first discharge/charge cycle. The pristine iron sulfide (box in upper left) does not return to its original state after this cycle, as some sodium ions remain trapped in the core (box in lower right). As a result, there is an initial loss in battery capacity.

UPTON, NY—Sometimes understanding how a problem arises in the first place is key to finding its solution. For a team of scientists at the U.S. Department of Energy’s (DOE) Brookhaven National Laboratory, taking this approach led them to the cause of degraded performance in an operating sodium-ion battery.

“We discovered that the loss in battery capacity is largely the result of sodium ions entering and leaving iron sulfide—the battery electrode material we studied—during the first charge/discharge cycle,” explained Brookhaven physicist Jun Wang, who led the research. “The electrochemical reactions involved cause irreversible changes in the microstructure and chemical composition of iron sulfide, which has a high theoretical energy density. By identifying the underlying mechanism limiting its performance, we seek to improve its real energy density.”

The team’s findings, published online in Advanced Energy Materials on March 3, could inform the design of future batteries capable of storing the amount of energy and surviving the many cycles required for large-scale energy applications, such as electric vehicles.

How a rechargeable sodium-ion battery works

Sodium-ion batteries work in the same way as lithium-ion ones. During discharge, sodium ions move from a negative electrode (anode) to a positive electrode (cathode) through an electrolyte, which is a chemical medium that allows the flow of electrical charge. When the battery is charging, the ions move in the reverse direction from the cathode to the anode. In this study, sodium was the anode material and iron sulfide was the cathode material.

Most portable electronics today are powered by rechargeable lithium-ion batteries. But lithium is expensive and limited in supply, so scientists have been looking for alternatives. Sodium has recently emerged as a prime candidate because it is less expensive, more abundant, and has similar chemical properties.

Wang’s team set out to change that. Using a full-field transmission x-ray microscope (TXM) at Brookhaven’s former National Synchrotron Light Source (NSLS) and later the Advanced Photon Source (APS) at DOE’s Argonne National Laboratory (the instrument was temporarily relocated there when NSLS closed in 2015 and will return to Brookhaven when the new TXM beamline at the replacement facility, NSLS-II, is ready)—both DOE Office of Science User Facilities—the scientists imaged what happened as sodium ions were inserted into (sodiation) and extracted from (desodiation) an iron sulfide electrode over 10 cycles.

This study represents the first time that researchers have captured the structural and chemical evolution of a sodium–metal sulfide battery during its electrochemical reactions.

“Our full-field hard x-ray transmission microscope was critical because it provided nanoscale spatial resolution and a large field of view. Other microscopes typically provide one or the other but not both,” said Wang.

Finding the root of the problem

The TXM images reveal significant fractures and cracks in the battery material after the first cycle. These microstructural defects, which originate at the surface of the iron sulfide particles and then proceed inward toward their core, are the result of the particles expanding in volume upon initial sodiation during the discharge process. Although these expanded particles subsequently shrink during the first desodiation (charging) process, they are unable to reverse back to their original pristine condition—a phenomenon called irreversibility.

To further support that this irreversibility was mainly due to the initial insertion and removal of sodium ions, the scientists tracked and mapped the corresponding chemical changes in real time. They used TXM in combination with a spectroscopy technique called x-ray absorption near edge structure, in which x-rays are fine-tuned to the energy at which there is a sharp decrease in the amount of x-rays that a chemical element absorbs. Because this energy is unique to each element, the resulting absorption spectra can be used to identify chemical composition.

To quantify the diffusion of sodium ions, the team measured the changes in voltage of the battery material during cycling. From these voltage measurements, they were able to calculate the rate at which the sodium ions were moving in and out of the iron sulfide particles.

They found that in the beginning of the first discharge, sodium ions diffuse very slowly. But at some voltage, the diffusivity increases significantly. The opposite occurs during the first charge: sodium ions diffuse quickly at first, and then at a certain voltage, the diffusivity suddenly drops. These results are consistent with the structural and chemical changes observed through TXM.

“It appears that on the one hand, the cracks and fractures created by volume expansion of the iron sulfide particles during discharge destroy the particles’ structure,” said Wang. “But on the other hand, these defects provide a path for sodium ions to get to the particles’ core. When the volume shrinks during charging, some of these paths are blocked, restricting the movement of sodium ions and trapping some in the core.”

After this volume expansion and shrinkage in the first cycle, the battery material seems to achieve microstructural and chemical “equilibrium.” Using the same TXM techniques, the team found that microstructure and chemical composition of the particles show robust reversibility as early as the second cycle and continuing through the tenth cycle. In other words, the battery material does not undergo significant subsequent changes in volume and is readily converted back to its original chemical form. They further confirmed their findings by performing real-time x-ray nanotomography to create 3D images of the battery material and measuring the percent volume change.

Coming up with a solution

Now that the scientists know why the structural and chemical irreversibility occurs, they can start working on ways to improve battery capacity after the first cycle. For example, one possible solution to the problem of sodium ion mobility may be decreasing the size of the iron sulfide particles so that a one-phase reaction occurs, making it much easier for sodium to react. Wang’s team also plans to work with collaborators on modeling and simulations that will help inform the design of battery materials.

This work was supported by DOE’s Laboratory Directed Research and Development program.