UPTON, NY — The American Physical Society (APS) has elected two scientists from the U.S. Department of Energy’s Brookhaven National Laboratory as 2016 APS Fellows, an honor bestowed once a year to a fraction of a percentage of the society’s members. For over 100 years, APS has strived to spread knowledge and a love of physics through journals, science education, and advocacy. Fellows are nominated by their peers and are chosen for their outstanding research, leadership or service in physics. Read on for citations and summaries of contributions by Brookhaven’s new APS Fellows Michiko Minty and Peter Petreczky. Their work in accelerator physics and nuclear physics theory, respectively, is essential to ongoing research and discoveries at the Relativistic Heavy Ion Collider (RHIC), a DOE Office of Science User Facility.

For achievements in beam instrumentation and operations leading to greatly enhanced performance of the Relativistic Heavy Ion Collider. 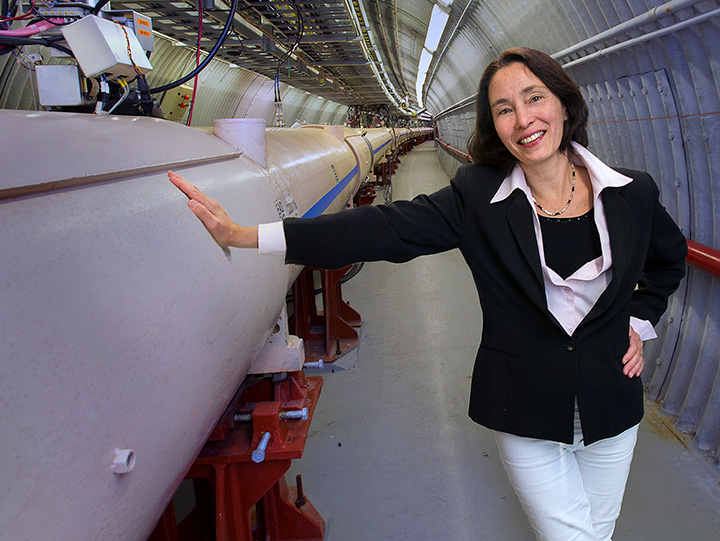 Michiko Minty heads the group of physicists, engineers, and technicians at Brookhaven Lab responsible for designing, installing, operating, and maintaining equipment that monitors charged particle beams zipping around Brookhaven’s accelerators, including RHIC, at nearly the speed of light. For RHIC’s nuclear physics experiments to be successful the tiny bunches of particles—protons or heavy atomic nuclei such as gold—need to be just the right size, follow exactly the right path, and collide in precisely controlled ways.

Minty has contributed to enormous improvements in the accuracy and precision in the measurement of all these parameters. When she arrived at Brookhaven and joined the effort to enhance beam-measuring instruments in 2008, the first task was to get higher-resolution images of the beams’ behavior. These sharper images help guide corrections to the beam’s performance. Under Minty’s direction, the group created a suite of feedback systems that automatically take in hundreds of measurements on the speeding particles, analyze the data, and send back adjustments to the beam every second.

“Setting up a polarized proton beam used to take roughly five weeks, with physicists working at all hours,” Minty said. “These days it is closer to three weeks.”

Faster setup means more time for the physics experiments and offers the possibility of operating multiple different beam energies and/or particle species within any given year. It also lowers electrical costs for the lab.

"I am honored to have been elected an APS fellow,” said Minty. “Addressing complexities in the operation of large-scale accelerator facilities was vital for maximizing the physics output of the accelerator complex. It is gratifying to have my contributions toward this so recognized."

Minty’s team is now working on several new projects, including an electron cooling system and many other accelerator concepts required for a proposed future Electron-Ion Collider.

Minty earned her Ph.D. at Indiana University Bloomington in 1991. She spent her postdoctoral years at the Indiana University Cyclotron and University of Michigan, and later at DOE’s SLAC National Accelerator Laboratory. In addition to teaching at accelerator schools across Japan, Switzerland, Russia and the U.S., she co-authored a comprehensive textbook entitled Measurement and Control of Charged Particle Beams with Frank Zimmermann. She became a staff scientist at SLAC as well as the Deutsches Elektronen Synchrotron in Germany before joining Brookhaven in 2008.

For seminal contributions to the understanding of color screening and quarkonium properties in the quark-gluon plasma based on lattice quantum chromodynamics and effective field theory approaches. 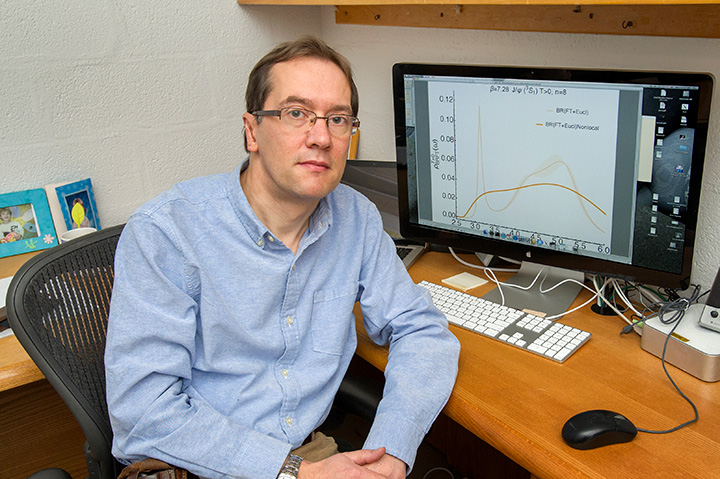 Peter Petreczky is a theoretical physicist in the Nuclear Theory Group at Brookhaven Lab. His work centers on quantum chromodynamics (QCD), the theory of the strong interaction that describes much of visible matter. This force, carried by particles called gluons, pulls together fundamental building blocks known as quarks to form protons and neutrons, and ultimately atomic nuclei. The theory and calculations that Petreczky develops help experimental scientists at the Relativistic Heavy Ion Collider (RHIC) make sense of their findings when they smash heavy nuclei together to create a high-temperature mixture of quarks and gluons like the one that existed many billions of years ago just after the Big Bang. The fellowship recognizes much of Petreczky’s work over the years on how quarkonia—particles made of a heavy quark and its antiquark—behave at these extraordinarily high temperatures.

By the year 2000, physicists had already established several ways to model and describe how quarkonia dissolve when heated to extremes. This phenomenon is called color screening – a weakening of the strong force between the constituent quark and antiquark as temperature increases. However, no one had yet attempted to do so using the theoretical principles of QCD, rather than basing the models on experimental data. So Petreczky embarked upon the problem, aided by supercomputers such as IBM’s Blue Gene/Q, which can muscle through the massive calculations demanded by QCD. The combination of Petreczky’s theory with results gathered at RHIC helps scientists understand the complexities of the strong force.

“I am honored and delighted that this work has been recognized,” Petreczky said, noting that there are still many years of analysis ahead. He looks forward to continuing the search for understanding. “It’s collaborative work, and it’s fun to work with people from different parts of the world.”

Petreczky received his Ph.D. in physics at Eötvös University in Hungary in 1999 and worked as a research fellow from 1999 to 2002 at Bielefeld University in Germany. He joined BNL in 2002 as a Distinguished Goldhaber Fellow and was granted tenure in 2010. In 2014 he was awarded the Zimanyi Medal, a worldwide recognition for excellence of research in theoretical heavy ion physics for scientists under the age of 40. His work on quarkonia at high temperatures will be used by sPHENIX, an upgraded particle detector at RHIC, when it starts to take data in the early 2020s.

Minty and Petreczky’s work is supported by the DOE Office of Science.