UPTON, NY—Ionic liquids—salts made by combining positively charged molecules (cations) and negatively charged molecules (anions) that are liquid at relatively low temperatures, often below room temperature—are increasingly being investigated for uses in batteries, supercapacitors, and transistors. Their unique physical and chemical properties, including good ionic conductivity, low flammability and volatility, and high thermal stability, make them well suited for such applications. But thousands of ionic liquids exist and exactly how they interact with the electrified surfaces of electrodes remains poorly understood, making it difficult to choose the proper ionic liquid for a particular application. 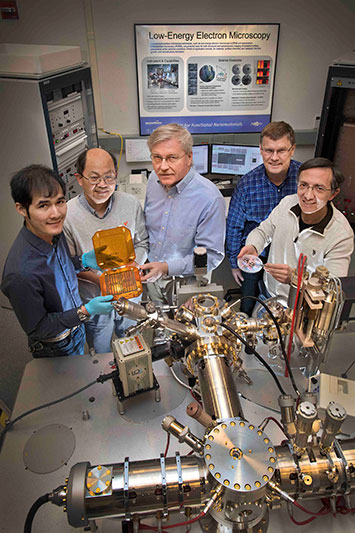 (Left to right) Wattaka Sitaputra, Feng Wang, James Wishart, Jerzy Sadowski, and Dario Stacchiola demonstrated a new method for studying ionic liquids at electrode interfaces in real time. Sitaputra, Sadowski, and Stacchiola used the electron microscope pictured above at Brookhaven Lab's Center for Functional Nanomaterials to observe how the ions in a particular liquid move and rearrange as voltage is applied to gold electrodes. The box that Sitaputra is holding contains the photolithography mask that he used to fabricate the electrodes, and Stacchiola is holding a tray with sample holders for the microscope. Wishart of Brookhaven's Chemistry Division contributed his expertise in ionic liquids; Wang, a physicist in Brookhaven's Sustainable Energy Technologies Division and an expert in energy storage systems, helped perform electrochemical measurements.

Now, scientists at the U.S. Department of Energy’s (DOE) Brookhaven National Laboratory have demonstrated a new method for observing in real time how the ions of such liquids move and reconfigure as different voltages are applied to the electrodes. The method is described in a paper published on May 12 in the online edition of Advanced Materials.

“When ionic liquid electrolytes come into contact with an electrified electrode, a special structure consisting of alternating layers of cations and anions—called an electric double layer (EDL)—forms at that interface,” said first author Wattaka Sitaputra, a scientist at Brookhaven’s Center for Functional Nanomaterials (CFN), a DOE Office of Science User Facility where the research was conducted. “But tracking the real-time evolution of the EDL, where the electrochemical reactions take place in batteries, is difficult because it is very thin (only a few nanometers thick) and buried by the bulk portion of the ionic liquid.”

Until now, scientists have only been able to look at the initial and final EDL structures by using microscopy and spectroscopy techniques; the intermediate structure has been harder to probe. To visualize the structural changes of the EDL and the movement of ions as voltage is applied to the electrodes, the Brookhaven team used an imaging technique called photoemission electron microscopy (PEEM). In this technique, surface electrons are excited with an energy source and accelerated into an electron microscope, where they pass through magnifying lenses before being projected onto a detector that records the electrons emitted from the surface. Local variations in the photoemission signal intensities are then used to generate contrast images of the surface. In this case, the team used ultraviolet light to excite the electrons on the surfaces of both the ionic liquid (known as EMMIM TFSI) they deposited as thin films and two gold electrodes they fabricated.

“Imaging the whole surface, including the electrodes and the space between them, allows us to study not only the evolution of the structure of the ionic liquid–electrode interface but also to probe both electrodes at the same time while changing various conditions of the system,” said CFN scientist and coauthor Jerzy (Jurek) Sadowski.

In this initial demonstration, the team changed the voltage applied to the electrodes, the thickness of the ionic liquid films, and the temperature of the system, all while monitoring changes in photoemission intensity.

The scientists found that the ions (which normally layer in a checkerboard-like configuration for this ionic liquid) move and arrange themselves according to the sign and magnitude of the applied voltage. Cations gravitate toward the electrode with the negative bias to counter the charge, and vice versa for anions.

The scientists acquired this photoemission electron microscopy movie while biasing gold electrodes covered with three monolayers of the studied ionic liquid. The change in contrast corresponds to a change in the photoemission signal intensities from the ionic liquid–electrode interface, signifying the migration of ions in response to voltage biases on the electrodes. A positive voltage bias results in a darker contrast (higher density of anions near electrode) and a negative one in brighter contrast (higher density of cations near electrode).

As the difference in potential increases between the two electrodes, a highly dense layer of cations or anions can accumulate near the biased electrode, preventing further ions of the same charge from moving there (a phenomenon called overcrowding) and reducing ion mobility.

They also discovered that more counter ions gather near the biased electrode in thicker films.

“For very thin films, the number of ions available for rearrangement is small so the EDL layer may not be able to form,” said Sitaputra. “In the thicker films, more ions are available and they have more room to move around. They rush to the interface and then disperse back into the bulk upon overcrowding to form a more stable structure.” 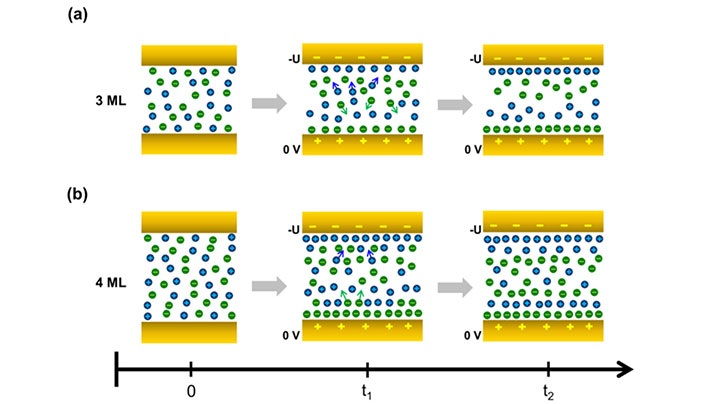 The team's research showed that the ionic reconfigurations occurring near the gold electrodes (yellow bars) depend on the thickness of the studied ionic liquid films, as illustrated in the above schematic. Anions (green circles) and cations (blue circles) are structured in a checkerboard-like pattern (left) without an applied voltage but rearrange when one of the electrodes is biased (-U). The thicker film (b) has a second layer of cations near the -U electrode.

The team further explored the importance of mobility in the rearrangement process by cooling the thicker film until the ions virtually stopped moving.

According to the team, applying PEEM to an operando experiment is quite novel and has never been done for ionic liquids.

“We had to overcome several technical challenges in the experimental setup, including designing and fabricating the gold-patterned electrodes and incorporating the sample holder in the electron microscope,” explained Sadowski. “Ionic liquids probably have not been investigated through this technique because putting a liquid into an ultrahigh vacuum–based microscope seems counterintuitive.”

The team plans to continue their research using the new aberration-corrected low-energy electron microscope (LEEM)/PEEM system—installed through a partnership between CFN and the National Synchrotron Light Source II (NSLS-II), another DOE Office of Science User Facility at Brookhaven—at NSLS-II’s Electron Spectro-Microscopy beamline. This system will enable the team to study not only the structural and electronic changes but also the chemical changes of the ionic liquid–electrode interface—all in a single experiment. By determining these unique properties, scientists will be able to select the optimal ionic liquids for specific energy storage applications.

This work was supported in part by the DOE’s Laboratory Directed Research and Development program and represents a collaboration between the CFN and Brookhaven’s Chemistry and Sustainable Energy Technologies Divisions.