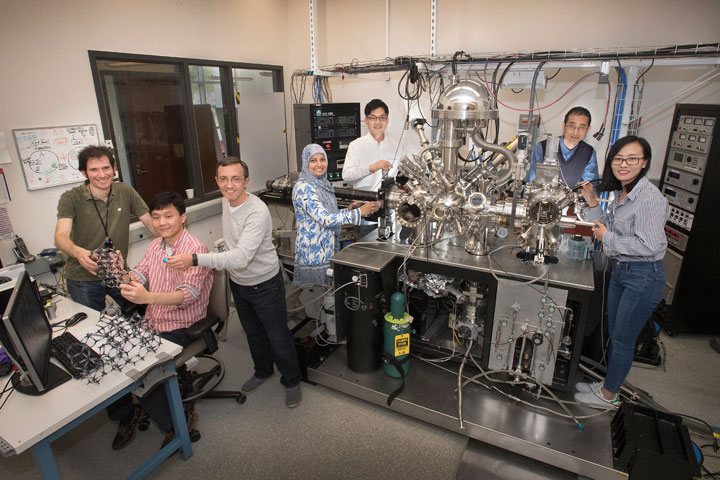 (Left to right) Anibal Boscoboinik, Jian-Qiang Zhong, Dario Stacchiola, Nusnin Akter, Taejin Kim, Deyu Lu, and Mengen Wang at Brookhaven Lab's Center for Functional Nanomaterials (CFN). The team of scientists (including John Kestell and Alejandro Boscoboinik) carried out experiments at CFN, at Brookhaven's National Synchrotron Light Source I and II, and in the Lab's Chemistry Division to study the trapping of individual argon gas atoms (blue prop in Stacchiola's hand) in two-dimensional (2D) nanoporous frameworks like the one Boscoboinik and Zhong are holding. They had been using these 2D frameworks as analogues to study catalysis in 3D porous materials called zeolites (structural model on the table), which speed up many important reactions such as the conversion of nitrogen-oxide emissions into nitrogen.

UPTON, NY—Scientists at the U.S. Department of Energy’s (DOE) Brookhaven National Laboratory had just finished an experiment with a two-dimensional (2D) structure they synthesized for catalysis research when, to their surprise, they discovered that atoms of argon gas had gotten trapped inside the structure’s nanosized pores. Argon and other noble gases have previously been trapped in three-dimensional (3D) porous materials, but immobilizing them on surfaces had only been achieved by either cooling the gases to very low temperatures to condense them, or by accelerating gas ions to implant them directly into materials.

“We are the first team to trap a noble gas in a 2D porous structure at room temperature,” said Anibal Boscoboinik, a materials scientist at Brookhaven Lab’s Center for Functional Nanomaterials (CFN), a DOE Office of Science User Facility where part of the research was conducted.

This achievement, reported in a paper published today in Nature Communications, will enable scientists to use traditional surface-science tools—such as x-ray photoelectron and infrared reflection absorption spectroscopy—to perform detailed studies of single gas atoms in confinement. The knowledge gained from such research could inform the design, selection, and improvement of adsorbent materials and membranes for capturing gases such as radioactive krypton and xenon generated by nuclear power plants.

The team of scientists from Brookhaven Lab, Stony Brook University, and the National University of San Luis in Argentina synthesized 2D aluminosilicate (composed of aluminum, silicon, and oxygen) films on top of a ruthenium metal surface. The scientists created this 2D model catalyst material to study the chemical processes happening in the industrially used 3D catalyst (called a zeolite), which has a cage-like structure with open pores and channels the size of small molecules. Because the catalytically active surface is enclosed within these cavities, it is difficult to probe with traditional surface-science tools. The 2D analogue material has the same chemical composition and active site as the 3D porous zeolite but its active site is exposed on a flat surface, which is easier to access with such tools. 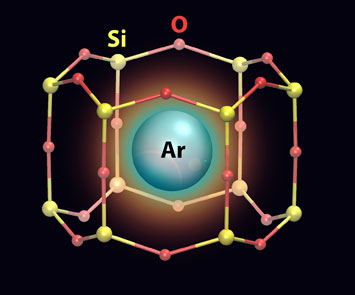 An artistic rendering of an argon (Ar) atom trapped in a nanocage that has a silicon (Si)-oxygen (O) framework.

To confirm that the argon atoms were trapped in these “nanocages,” the scientists exposed the 2D material to argon gas and measured the kinetic energy and number of electrons ejected from the surface after striking it with an x-ray beam. They performed these studies at the former National Synchrotron Light Source I (NSLS-I) and its successor facility, NSLS-II (both DOE Office of Science User Facilities at Brookhaven), with an instrument developed and operated by the CFN. Because the binding energies of core electrons are unique to each chemical element, the resulting spectra reveal the presence and concentration of elements on the surface. In a separate experiment conducted at the CFN, they grazed a beam of infrared light over the surface while introducing argon gas. When atoms absorb light of a specific wavelength, they undergo changes in their vibrational motions that are specific to that element’s molecular structure and chemical bonds.

To get a better understanding of how the framework itself contributes to caging, the scientists investigated the trapping mechanism with silicate films, which are similar in structure to the aluminosilicates but contain no aluminum. In this case, they discovered that not all of the argon gets trapped in the cages—a small amount goes to the interface between the framework and ruthenium surface. This interface is too compressed in the aluminosilicate films for argon to squeeze in.

After studying adsorption, the scientists examined the reverse process of desorption by incrementally increasing the temperature until the argon atoms completely released from the surface at 350 degrees Fahrenheit. They corroborated their experimental spectra with theoretical calculations of the amount of energy associated with argon entering and leaving the cages.

In another infrared spectroscopy experiment conducted in Brookhaven’s Chemistry Division, they explored how the presence of argon in the cages affects the passage of carbon monoxide molecules through the framework. They found that argon restricts the number of molecules that adsorb onto the ruthenium surface.

“In addition to trapping small atoms, the cages could be used as molecular sieves for filtering carbon monoxide and other small molecules, such as hydrogen and oxygen,” said first author Jian-Qiang Zhong, a CFN research associate.

While their main goal going forward will be to continue investigating zeolite catalytic processes on the 2D material, the scientists are interested in learning the impact of different pore sizes on the materials’ ability to trap and filter gas molecules.

“As we seek to better understand the material, interesting and unexpected findings keep coming up,” said Boscoboinik. “The ability to use surface-science methods to understand how a single atom of gas behaves when it is confined in a very small space opens up lots of interesting questions for researchers to answer.”

This research used resources of the National Energy Research Scientific Computing Center, a DOE Office of Science User Facility at Lawrence Berkeley National Laboratory, and was supported by Brookhaven’s Laboratory Directed Research and Development program and the National Scientific and Technical Research Council (CONICET) of Argentina.