UPTON, NY — Three scientists at the U.S. Department of Energy’s (DOE) Brookhaven National Laboratory have been selected by DOE’s Office of Science to receive significant research funding through its Early Career Research Program.

The program, now in its eighth year, is designed to bolster the nation’s scientific workforce by providing support to exceptional researchers during the crucial early career years, when many scientists do their most formative work. The three Brookhaven Lab recipients are among a total of 59 recipients selected this year after a competitive review of about 700 proposals.

The scientists are each expected to receive grants of up to $2.5 million over five years to cover their salary plus research expenses. A list of the 59 awardees, their institutions, and titles of research projects is available on the Early Career Research Program webpage.

This year’s Brookhaven Lab awardees include: 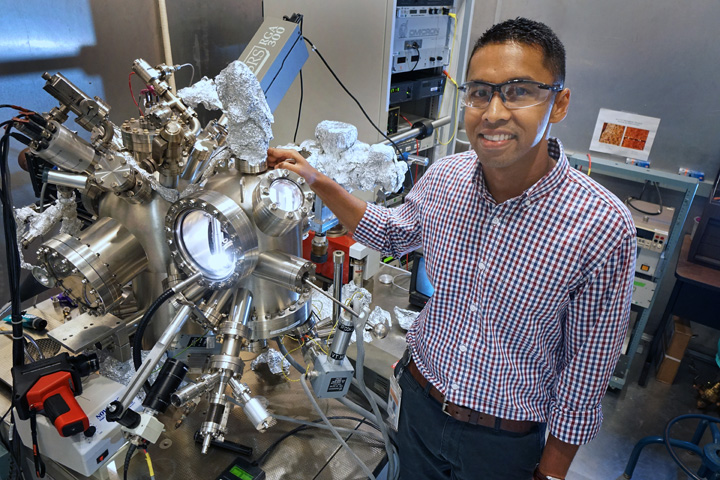 Low Temperature Oxidative Methanol Synthesis from Methane.” His overarching goal is to study and improve catalysts that enable the conversion of methane (CH4), the primary component of natural gas, directly into methanol (CH3OH), a valuable chemical intermediate and potential renewable fuel.

This research builds on the recent discovery of a single step catalytic process for this reaction that proceeds at low temperatures and pressures using inexpensive earth abundant catalysts. The reaction promises to be more efficient than current multi-step processes, which are energy-intensive, and a significant improvement over other attempts at one-step reactions where higher temperatures convert most of the useful hydrocarbon building blocks into carbon monoxide and carbon dioxide rather than methanol. With Early Career funding, Senanayake’s team will explore the nature of the reaction, and build on ways to further improve catalytic performance and specificity.

The project will exploit unique capabilities of facilities at Brookhaven Lab, particularly at the National Synchrotron Light Source II (NSLS-II), that make it possible to study catalysts in real-world reaction environments (in situ) using x-ray spectroscopy, electron imaging, and other in situ methods. Experiments using well defined model surfaces and powders will reveal atomic level catalytic structures and reaction dynamics. When combined with theoretical modeling, these studies will help the scientists identify the essential interactions that take place on the surface of the catalyst. Of particular interest are the key features that activate stable methane molecules through “soft” oxidative activation of C-H bonds so methane can be converted to methanol using oxygen (O2) and water (H2O) as co-reactants.

This work will establish and experimentally validate principles that can be used to design improved catalysts for synthesizing fuel and other industrially relevant chemicals from abundant natural gas.

“I am grateful for this funding and the opportunity to pursue this promising research,” Senanayake said. “These fundamental studies are an essential step toward overcoming key challenges for the complex conversion of methane into valued chemicals, and for transforming the current model catalysts into practical versions that are inexpensive, durable, selective, and efficient for commercial applications.”

Sanjaya Senanayake earned his undergraduate degree in material science and Ph.D. in chemistry from the University of Auckland in New Zealand in 2001 and 2006, respectively. He worked as a research associate at Oak Ridge National Laboratory from 2005-2008, and served as a local scientific contact at beamline U12a at the National Synchrotron Light Source (NSLS) at Brookhaven Lab from 2005 to 2009. He joined the Brookhaven staff as a research associate in 2008, was promoted to assistant chemist and associate chemist in 2014, while serving as the spokesperson for NSLS Beamline X7B. He has co-authored over 100 peer reviewed publications in the fields of surface science and catalysis, and has expertise in the synthesis, characterization, reactivity of catalysts and reactions essential for energy conversion. He is an active member of the American Chemical Society, North American Catalysis Society, the American Association for the Advancement of Science, and the New York Academy of Science. 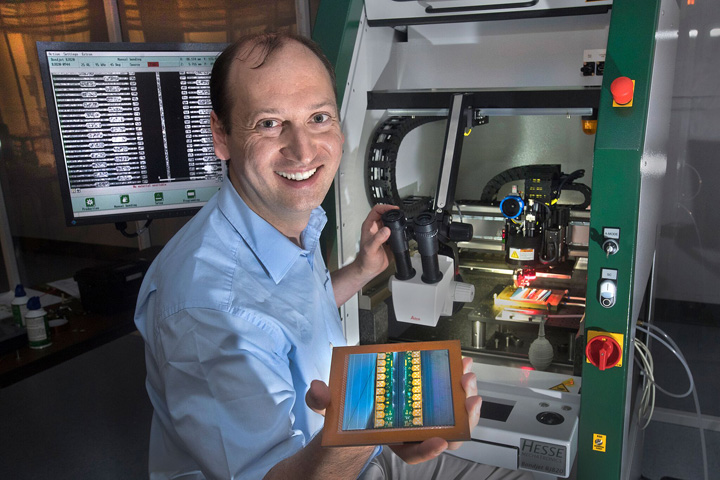 Brookhaven Lab physicist Alessandro Tricoli will receive Early Career Award funding from DOE’s Office of High Energy Physics for a project titled “Unveiling the Electroweak Symmetry Breaking Mechanism at ATLAS and at Future Experiments with Novel Silicon Detectors.” His work aims to improve, through precision measurements, the search for exciting new physics beyond what is currently described by the Standard Model, the reigning theory of particle physics.

The discovery of the Higgs boson at the Large Hadron Collider (LHC) at the European Organization for Nuclear Research (CERN) in Switzerland confirmed how the quantum field associated with this particle generates the masses of other fundamental particles, providing key insights into electroweak symmetry breaking—the mass-generating “Higgs mechanism.” But at the same time, despite direct searches for “new physics” signals that cannot be explained by the Standard Model (SM), scientists have yet to observe any evidence for such phenomena at the LHC—even though they know the SM is incomplete (for example it does not include an explanation for gravity).

Tricoli’s research aims to make precision measurements to test fundamental predictions of the SM to identify anomalies that may lead to such discoveries. He focuses on the analysis of data from the LHC’s ATLAS experiment to comprehensively study electroweak interactions between the Higgs and particles called W and Z bosons. Any discovery of anomalies in such interactions could signal new physics at very high energies, not directly accessible by the LHC.

This method of probing physics beyond the SM will become even more stringent once the high-luminosity upgrade of ATLAS, currently underway, is completed for longer-term LHC operations planned to begin in 2026. Tricoli’s work will play an important role in the upgrade of ATLAS’s silicon detectors, using novel state-of-the art technology capable of precision particle tracking and timing so that the detector will be better able to identify primary particle interactions and tease out signals from the background events. Designing these next-generation detector components could also have a profound impact on the development of future instruments that can operate in high radiation environments, such as in future colliders or in space.

“This award will help me build a strong team around a research program I feel passionate about at ATLAS and the LHC, and for future experiments,” Tricoli said.

“I am delighted and humbled by the challenge given to me with this award to take a step forward in science.”

Alessandro Tricoli received his undergraduate degree in physics from the University of Bologna, Italy, in 2001, and his Ph.D. in particle physics from Oxford University in 2007. He worked as a research associate at Rutherford Appleton Laboratory in the UK from 2006 to 2009, and as a research fellow and then staff member at CERN from 2009 to 2015, receiving commendations on his excellent performance from both institutions. He joined Brookhaven Lab as an assistant physicist in 2016. A co-author on multiple publications, he has expertise in silicon tracker and detector design and development, as well as the analysis of physics and detector performance data at high-energy physics experiments. He has extensive experience tutoring and mentoring students, as well as coordinating large groups of physicists involved in research at ATLAS. 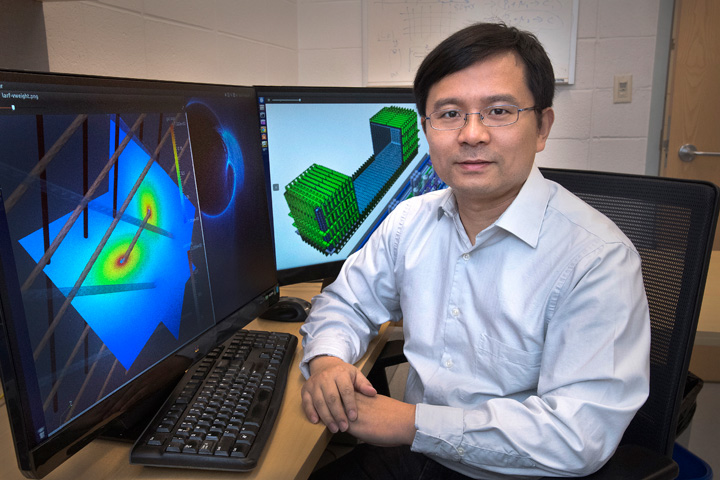 Among the most compelling is the question of why there’s a predominance of matter over antimatter in our universe. Though scientists believe matter and antimatter were created in equal amounts during the Big Bang, equal amounts would have annihilated one another, leaving only light. The fact that we now have a universe made almost entirely of matter means something must have tipped the balance.

A US-hosted international experiment scheduled to start collecting data in the mid-2020s, called the Deep Underground Neutrino Experiment (DUNE), aims to explore this mystery through the search for two rare but necessary conditions for the imbalance: 1) evidence that some processes produce an excess of matter over antimatter, and 2) a sizeable difference in the way matter and antimatter behave. The DUNE experiment will look for signs of these conditions by studying how protons (one of the two “nucleons” that make up atomic nuclei) decay as well as how elusive particles called neutrinos oscillate, or switch identities, among three known types.

The DUNE experiment will make use of four massive 10-kiloton detector modules, each with a Liquid Argon Time Projection Chamber (LArTPC) at its core. Chao’s aim is to optimize the performance of the LArTPCs to fully realize their potential to track and identify particles in three dimensions, with a particular focus on making them sensitive to the rare proton decays. His team at Brookhaven Lab will establish a hardware calibration system to ensure their ability to extract subtle signals using specially designed cold electronics that will sit within the detector. They will also develop software to reconstruct the three-dimensional details of complex events, and analyze data collected at a prototype experiment (ProtoDUNE, located at Europe’s CERN laboratory) to verify that these methods are working before incorporating any needed adjustments into the design of the detectors for DUNE.

"I am honored and thrilled to receive this distinguished award," said Chao. "With this support, my colleagues and I will be able to develop many new techniques to enhance the performance of LArTPCs, and we are excited to be involved in the search for answers to one of the most intriguing mysteries in science, the matter-antimatter asymmetry in the universe."

Chao Zhang received his B.S. in physics from the University of Science and Technology of China in 2002 and his Ph.D. in physics from the California Institute of Technology in 2010, continuing as a postdoctoral scholar there until joining Brookhaven Lab as a research associate in 2011. He was promoted to physics associate III in 2015. He has actively worked on many high-energy neutrino physics experiments, including DUNE, MicroBooNE, Daya Bay, PROSPECT, JUNO, and KamLAND, co-authoring more than 40 peer reviewed publications with a total of over 5000 citations. He has expertise in the field of neutrino oscillations, reactor neutrinos, nucleon decays, liquid scintillator and water-based liquid scintillator detectors, and liquid argon time projection chambers.  He is an active member of the American Physical Society.