Builder of accelerators and scientific collaborations across two continents 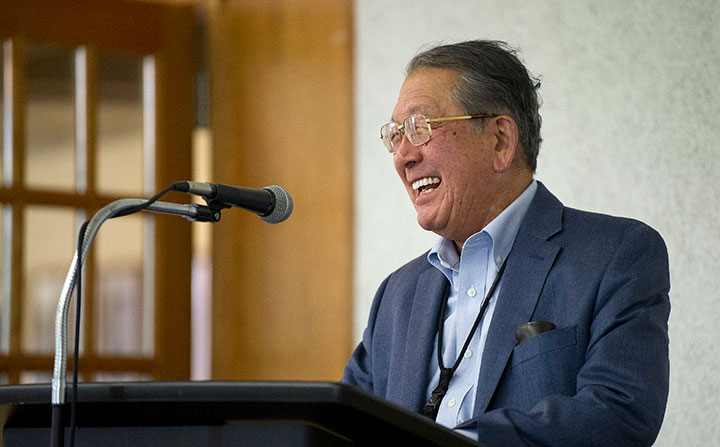 UPTON, NY — Satoshi Ozaki, a world-renowned physicist who helped design and build accelerators for scientific research across two continents, including two of the flagship facilities at the U.S. Department of Energy’s (DOE) Brookhaven National Laboratory, died on July 22, 2017, at the age of 88. He was a Senior Scientist Emeritus at Brookhaven Lab and a key driver of international collaborations in high-energy and nuclear physics.

“From his first days at Brookhaven, Satoshi had a tremendous impact on Brookhaven’s science,” said Brookhaven Lab Director Doon Gibbs. “He was one of the world’s foremost accelerator builders. His contributions to Brookhaven Lab were numerous, wide-ranging, and always characterized by his wisdom. The success of the Relativistic Heavy Ion Collider (RHIC) stands as a monument to his leadership, but he also left an indelible mark on the National Synchrotron Light Source II (NSLS-II). He was a wonderful mentor to many at Brookhaven and beyond, and he was a true friend.”

Ozaki joined Brookhaven Lab in 1959 with a master's degree in physics from Osaka University, Japan, and a Ph.D. in physics from the Massachusetts Institute of Technology. He worked in a group he eventually co-led with Samuel Lindenbaum on experiments at Brookhaven’s Alternating Gradient Synchrotron (AGS), developing state-of-the-art electronic detectors and an online data facility for monitoring detector performance by reconstructing subsets of data in real time. This was the first system of its kind and is now a routine component of data acquisition systems for complex electronic detectors. The Ozaki-Lindenbaum group also developed a multiparticle spectrometer at the AGS that served many experimental groups at Brookhaven and collaborating universities. In addition, Ozaki led the development of detectors for ISABELLE, the first design for a dual-ring superconducting collider at Brookhaven.

Ozaki’s work in experimental particle physics and large scale detector development at Brookhaven led to a 1981 invitation from the National Laboratory for High Energy Physics, KEK, in Japan to direct the construction of TRISTAN, the first major high-energy particle collider in that country. Under Ozaki, this $500-million project was completed on time and within budget to start operations in 1987, accelerating and storing beams of electrons and positrons at 30 billion electron volts—the highest energy in the world at the time. Since 1978, Ozaki was also involved in the initiation and oversight of an Agreement on High Energy Physics between the Japanese and U.S. governments. This highly fruitful program fostered relationships among scientists in the two nations and laid the groundwork for large-scale collaborative projects.

The Birth of RHIC 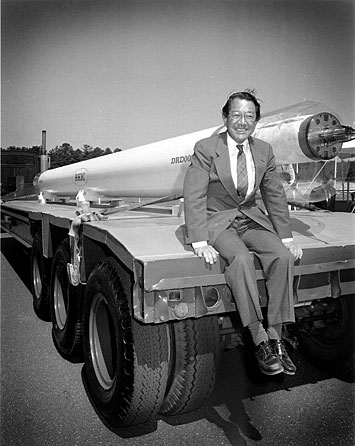 Satoshi Ozaki with one of the RHIC accelerator magnets

“It was a pleasure to welcome Satoshi and his wife, Yoko, back to Brookhaven National Laboratory. The timing was auspicious, the construction of TRISTAN was successfully completed and RHIC was ready to be launched,” said Nicholas Samios, director of the Laboratory at the time. “Satoshi was the right man, at the right place, at the right time to head the RHIC construction project, which he admirably accomplished.”

RHIC is a 2.4-mile-circumference collider that researchers use to smash atomic particles together to study the building blocks of visible matter and the fundamental force that holds them together to create atoms, stars, planets and everything we see in the universe today. Under Ozaki's leadership the RHIC project was successfully completed, with first collisions in 2000, driving experiments with a complement of four advanced particle detectors operated by international collaborations consisting of many hundreds of scientists.  RHIC is currently the highest energy colliding beams facility in the U.S., and has made many important discoveries about an extreme state of matter known as quark-gluon plasma and the origin of proton spin.

Ozaki was essential in securing Japanese support for RHIC-related projects, including key accelerator components to allow collisions of spin-polarized protons at RHIC as well as major components of the PHENIX detector.  He played a central role in establishing the partnership between RIKEN—Japan’s Institute of Physical and Chemical Research—and Brookhaven to establish the RIKEN BNL Research Center (RBRC). He served as the senior member of RBRC’s six-person Management Steering Committee. RBRC physicists, who come from RIKEN, Brookhaven Lab, and many other institutions around the world, have worked together since 1997 to understand and explore in depth the results from particle collisions at RHIC. 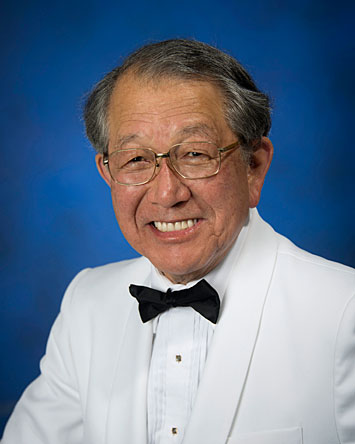 In 2005, Ozaki joined the National Synchrotron Light Source II (NSLS-II) project to lead construction of this world-leading facility at Brookhaven Lab. NSLS-II accelerates electrons and delivers synchrotron radiation emitted by these particles in the form of extremely bright, intense beams of x-ray, ultraviolet, and infrared light. Scientists use these beams to reveal unprecedented details about materials ranging from batteries to solar cells, catalysts, and proteins. As the initial head of the NSLS-II Accelerator Division, Ozaki built up the group, attracting staff and leading development for the accelerator portion of the facility's conceptual design. He remained with the project as a senior advisor even after formally retiring on December 31, 2012, taking on a major task of procuring the storage ring magnets, and attended the formal dedication of the completed facility in February 2015.

Ozaki also chaired the Accelerator System Advisory Committee for the Facility for Rare Isotope Beams (FRIB) currently under construction at Michigan State University. FRIB will produce rare isotopes created in the cosmos so scientists can study their decay to better understand the origins of the elements found on Earth.

Ozaki’s accomplishments have been recognized with numerous prestigious awards. Among them are the 2007 IEEE Nuclear and Plasma Sciences Society Accelerator Science and Technology Award, which he shared with Michael Harrison for leadership in the successful design and construction of RHIC. He also received the 2009 Robert R. Wilson Prize of the American Physical Society for his contributions to accelerator science and technology on two continents and his promotion of international collaboration. In 2012, he received a commendation from the Consul General of Japan, which was followed in 2013 with Japan’s prestigious Order of the Sacred Treasure, Gold Rays with Neck Ribbon, conferred by Emperor Akihito of Japan—both recognizing Ozaki’s outstanding contributions in physics through high-energy and nuclear physics studies, as well as his significant contributions to the promotion of Japan-U.S. cooperation in physics. In 2016, he received a BSA Distinguished Service Award from Brookhaven Science Associates (BSA), the company that manages Brookhaven Lab for DOE's Office of Science, in recognition of his lasting, impactful, and substantial contributions to the Laboratory and DOE since joining Brookhaven Lab.

Ozaki was pre-deceased by his wife, Yoko, and is survived by their two children, Keiko Simon and Tsuyoshi Ozaki, their spouses, and four grandchildren.

RHIC and NSLS-II are DOE Office of Science User Facilities.