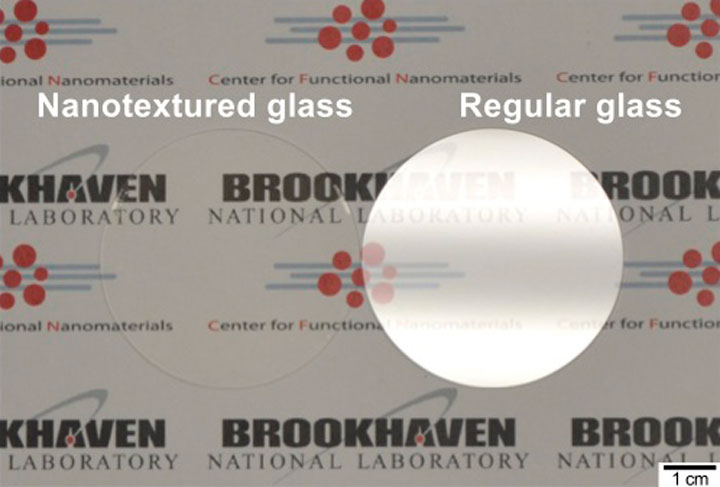 Glass surfaces with etched nanotextures reflect so little light that they become essentially invisible. This effect is seen in the above image, which compares the glare from a conventional piece of glass (right) to that from nanotextured glass (left), which shows no glare at all.

UPTON, NY—If you have ever watched television in anything but total darkness, used a computer while sitting underneath overhead lighting or near a window, or taken a photo outside on a sunny day with your smartphone, you have experienced a major nuisance of modern display screens: glare. Most of today’s electronics devices are equipped with glass or plastic covers for protection against dust, moisture, and other environmental contaminants, but light reflection from these surfaces can make information displayed on the screens difficult to see.

Now, scientists at the Center for Functional Nanomaterials (CFN)—a U.S. Department of Energy Office of Science User Facility at Brookhaven National Laboratory—have demonstrated a method for reducing the surface reflections from glass surfaces to nearly zero by etching tiny nanoscale features into them.

Whenever light encounters an abrupt change in refractive index (how much a ray of light bends as it crosses from one material to another, such as between air and glass), a portion of the light is reflected. The nanoscale features have the effect of making the refractive index change gradually from that of air to that of glass, thereby avoiding reflections. The ultra-transparent nanotextured glass is antireflective over a broad wavelength range (the entire visible and near-infrared spectrum) and across a wide range of viewing angles. Reflections are reduced so much that the glass essentially becomes invisible.

This “invisible glass” could do more than improve the user experience for consumer electronic displays. It could enhance the energy-conversion efficiency of solar cells by minimizing the amount of sunlight lost to refection. It could also be a promising alternative to the damage-prone antireflective coatings conventionally used in lasers that emit powerful pulses of light, such as those applied to the manufacture of medical devices and aerospace components.

“We’re excited about the possibilities,” said CFN Director Charles Black, corresponding author on the paper published online on October 30 in Applied Physics Letters. “Not only is the performance of these nanostructured materials extremely high, but we’re also implementing ideas from nanoscience in a manner that we believe is conducive to large-scale manufacturing.”

Former Brookhaven Lab postdocs Andreas Liapis, now a research fellow at Massachusetts General Hospital’s Wellman Center for Photomedicine, and Atikur Rahman, an assistant professor in the Department of Physics at the Indian Institute of Science Education and Research, Pune, are co-authors.

This cross-sectional image from a scanning electron microscope shows a glass surface textured with 170-nanometer-tall cones. The cones are packed very close to each other, only 52 nanometers apart. A two-inch piece of glass has 900 billion cones on its surface.

To texture the glass surfaces at the nanoscale, the scientists used an approach called self-assembly, which is the ability of certain materials to spontaneously form ordered arrangements on their own. In this case, the self-assembly of a block copolymer material provided a template for etching the glass surface into a “forest” of nanoscale cone-shaped structures with sharp tips—a geometry that almost completely eliminates the surface reflections. Block copolymers are industrial polymers (repeating chains of molecules) that are found in many products, including shoe soles, adhesive tapes, and automotive interiors.

Black and CFN colleagues have previously used a similar nanotexturing technique to impart silicon, glass, and some plastic materials with water-repellent and self-cleaning properties and anti-fogging abilities, and also to make silicon solar cells antireflective. The surface nanotextures mimic those found in nature, such as the tiny light-trapping posts that make moth eyes dark to help the insects avoid detection by predators and the waxy cones that keep cicada wings clean.

“This simple technique can be used to nanotexture almost any material with precise control over the size and shape of the nanostructures,” said Rahman. “The best thing is that you don’t need a separate coating layer to reduce glare, and the nanotextured surfaces outperform any coating material available today.”

"We have eliminated reflections from glass windows not by coating the glass with layers of different materials but by changing the geometry of the surface at the nanoscale,” added Liapis. “Because our final structure is composed entirely of glass, it is more durable than conventional antireflective coatings."

To quantify the performance of the nanotextured glass surfaces, the scientists measured the amount of light transmitted through and reflected from the surfaces. In good agreement with their own model simulations, the experimental measurements of surfaces with nanotextures of different heights show that taller cones reflect less light. For example, glass surfaces covered with 300-nanometer-tall nanotextures reflect less than 0.2 percent of incoming red-colored light (633-nanometer wavelength). Even at the near-infrared wavelength of 2500 nanometers and viewing angles as high as 70 degrees, the amount of light passing through the nanostructured surfaces remains high—above 95 and 90 percent, respectively.

In another experiment, they compared the performance of a commercial silicon solar cell without a cover, with a conventional glass cover, and with a nanotextured glass cover. The solar cell with the nanotextured glass cover generated the same amount of electric current as the one without a cover. They also exposed their nanotextured glass to short laser pulses to determine the intensity at which the laser light begins to damage the material. Their measurements reveal the glass can withstand three times more optical energy per unit area than commercially available antireflection coatings that operate over a broad wavelength range.

“Our role in the CFN is to demonstrate how nanoscience can facilitate the design of new materials with improved properties,” said Black. “This work is a great example of that—we’d love to find a partner to help advance these remarkable materials toward technology.”