Nanostructured surface textures—with shapes inspired by the structure of moths' eyes—prevent the reflection of light off silicon, improving conversion of sunlight to electricity 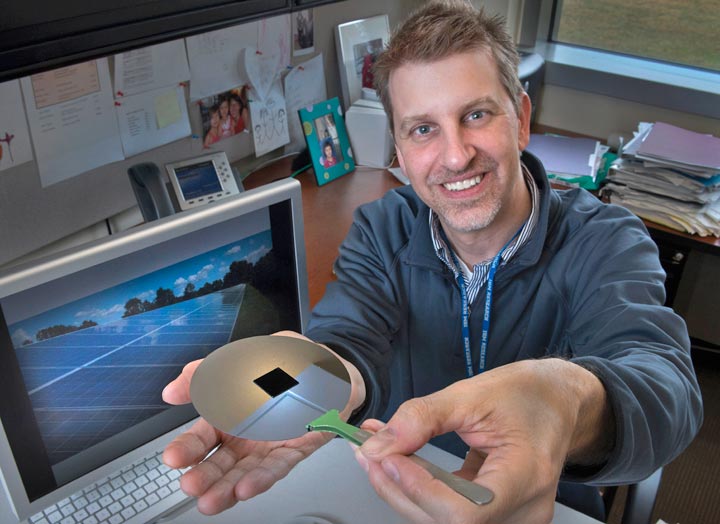 Chuck Black of the Center for Functional Nanomaterials displays a nanotextured square of silicon on top of an ordinary silicon wafer. The nanotextured surface is completely antireflective and could boost the production of solar energy from silicon solar cells.

UPTON, NY—Reducing the amount of sunlight that bounces off the surface of solar cells helps maximize the conversion of the sun's rays to electricity, so manufacturers use coatings to cut down on reflections. Now scientists at the U.S. Department of Energy's Brookhaven National Laboratory show that etching a nanoscale texture onto the silicon material itself creates an antireflective surface that works as well as state-of-the-art thin-film multilayer coatings.

The surface nanotexture … drastically cut down on reflection of many wavelengths of light simultaneously.

Their method, described in the journal Nature Communications and submitted for patent protection, has potential for streamlining silicon solar cell production and reducing manufacturing costs. The approach may find additional applications in reducing glare from windows, providing radar camouflage for military equipment, and increasing the brightness of light-emitting diodes.

"For antireflection applications, the idea is to prevent light or radio waves from bouncing at interfaces between materials," said physicist Charles Black, who led the research at Brookhaven Lab's Center for Functional Nanomaterials (CFN), a DOE Office of Science User Facility.

"The issue with using such coatings for solar cells," he said, "is that we'd prefer to fully capture every color of the light spectrum within the device, and we'd like to capture the light irrespective of the direction it comes from. But each color of light couples best with a different antireflection coating, and each coating is optimized for light coming from a particular direction. So you deal with these issues by using multiple antireflection layers. We were interested in looking for a better way."

For inspiration, the scientists turned to a well-known example of an antireflective surface in nature, the eyes of common moths. The surfaces of their compound eyes have textured patterns made of many tiny "posts," each smaller than the wavelengths of light. This textured surface improves moths' nighttime vision, and also prevents the "deer in the headlights" reflecting glow that might allow predators to detect them.

"We set out to recreate moth eye patterns in silicon at even smaller sizes using methods of nanotechnology," said Atikur Rahman, a postdoctoral fellow working with Black at the CFN and first author of the study.

A closeup shows how the nanotextured square of silicon completely blocks reflection compared with the surrounding silicon wafer.

The scientists started by coating the top surface of a silicon solar cell with a polymer material called a "block copolymer," which can be made to self-organize into an ordered surface pattern with dimensions measuring only tens of nanometers. The self-assembled pattern served as a template for forming posts in the solar cell like those in the moth eye using a plasma of reactive gases—a technique commonly used in the manufacture of semiconductor electronic circuits.

The resulting surface nanotexture served to gradually change the refractive index to drastically cut down on reflection of many wavelengths of light simultaneously, regardless of the direction of light impinging on the solar cell.

Solar cells textured in this way outperform those coated with a single antireflective film by about 20 percent, and bring light into the device as well as the best multi-layer-coatings used in the industry.

"We are working to understand whether there are economic advantages to assembling silicon solar cells using our method, compared to other, established processes in the industry," Black said.

One intriguing aspect of the study was that the scientists achieved the antireflective performance by creating nanoposts only half as tall as the required height predicted by a mathematical model describing the effect. So they called upon the expertise of colleagues at the CFN and other Brookhaven scientists to help sort out the mystery. 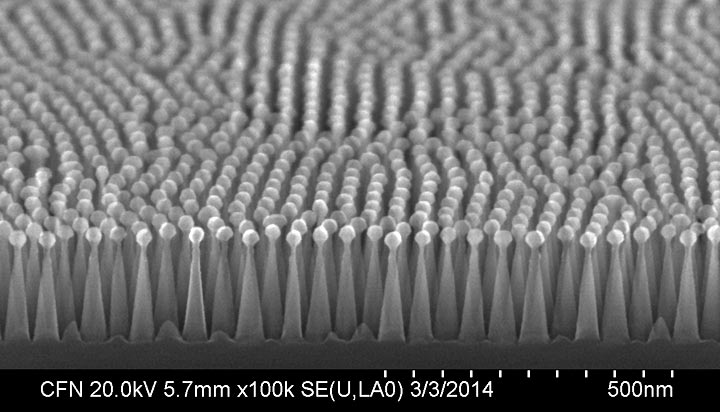 "This is a powerful advantage of doing research at the CFN—both for us and for academic and industrial researchers coming to use our facilities," Black said. "We have all these experts around who can help you solve your problems."

Using a combination of computational modeling, electron microscopy, and surface science, the team deduced that a thin layer of silicon oxide similar to what typically forms when silicon is exposed to air seemed to be having an outsized effect.

"On a flat surface, this layer is so thin that its effect is minimal," explained Matt Eisaman of Brookhaven's Sustainable Energy Technologies Department and a professor at Stony Brook University. "But on the nanopatterned surface, with the thin oxide layer surrounding all sides of the nanotexture, the oxide can have a larger effect because it makes up a significant portion of the nanotextured material."

Said Black, "This 'hidden' layer was the key to the extra boost in performance."

The scientists are now interested in developing their self-assembly based method of nanotexture patterning for other materials, including glass and plastic, for antiglare windows and coatings for solar panels.