Theoretical description supported by mathematical calculations provides a roadmap that could lead to discovery of a 'chiral spin liquid.' 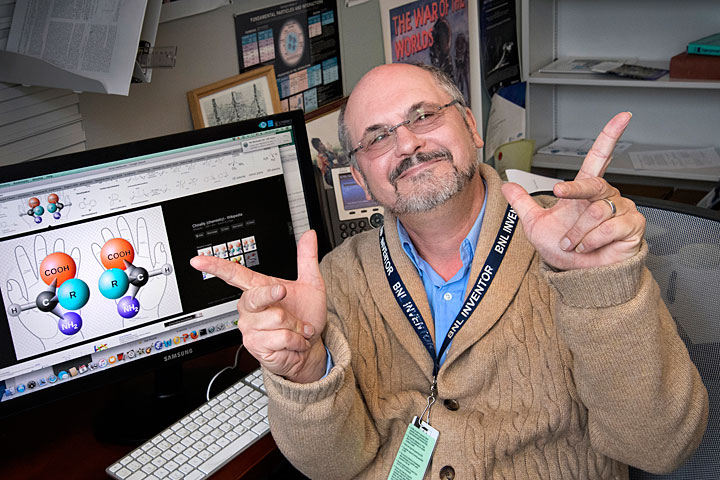 Alexei Tsvelik, a theoretical physicist at Brookhaven Lab, uses his hands to demonstrate two different chiral arrangements of three nearby electrons' magnetic moments. This idea of chirality, or handedness, is also used to describe mirror-image orientations of atoms in molecules, as shown on Tsvelik's computer screen.

UPTON, NY— As scientists have explored the structure and properties of matter at ever deeper levels they’ve discovered many exotic new materials, including superconductors that carry electric current with no resistance, liquid crystals that align to produce brilliant dynamic displays, and materials exhibiting various forms of magnetism. Yet some exotic forms of matter exist only in theory, predicted by scientists based on what they’ve learned at these deeper levels. Now a pair of physicists provides a theoretical roadmap that could point to the discovery of one such exotic magnetically ordered state, dubbed a “chiral spin liquid.”

“This form of matter was first suggested about 30 years ago as a particular kind of magnetic order without a definite global direction of magnetic moments,” said Alexei Tsvelik, a theorist at the U.S. Department of Energy’s Brookhaven National Laboratory. “But its discovery has remained a pipe dream, until now.”

In a new paper accepted as an Editors’ Suggestion by the journal Physical Review Letters, Tsvelik and co-author Oleg Yevtushenko of Ludwig Maximilian University in Germany describe the general requirements that such a magnetic system should satisfy. They also give particular suggestions on where and how to search for real examples of chiral spin liquids.

For a simple example of how the properties of matter emerge from “order” among its building blocks, think about how temperature influences the arrangement of molecules of water. You get dramatically different properties depending on whether the molecules are free to move about as steam, cooled to flow collectively as a liquid, or locked into set positions in a solid crystal of ice.

“In that simple case, the crystalline order can be seen with naked eye,” Tsvelik said. “But physicists are always on the lookout for something more subtle and sophisticated,” such as order in the orientations of magnetic moments of electrons.

Electrons have a property called spin, somewhat analogous to the spin of a toy top. The axis of rotation determines which way the spin is pointing, and makes individual electrons act like tiny magnets. In a material like iron, when the directions of the electrons’ microscopic magnetic moments are aligned, you get magnetism at the macroscopic scale.

In a chiral spin liquid, however, the scientists aren’t looking for such long-range magnetic order. Instead they are searching for a particular type of local magnetic order among groups of three neighbor electrons.

“What we want is an arrangement where three neighboring magnetic moments make a triad with their orientations fixed with respect to each other, but there is no global orientation,” Tsvelik said. He uses his right hand to demonstrate the relative orientations, with his thumb and index finger forming an L and his middle finger pointing straight out from his palm, all at right angles to one another—like the x, y, z axes on a three-dimensional graph.

The thumb and first two fingers on Tsvelik's hands show the relative orientations of three nearby electrons whose magnetic moments point at right angles to one another—like the x, y, z axes on a 3-D graph. In a "chiral spin liquid," physicists would expect to find such local ordering among electron's magnetic moments, and only one of the two possible chiral arrangements, without a definite global order.

Using a hand is an apt prop because it easily demonstrates that a mirror-image arrangement can be achieved using the left hand instead of the right. These two different arrangements are examples of positive and negative chirality, a word that physicists and chemists use to describe the “handedness” of three-dimensional structures. Once ordered, the spin liquid spontaneously chooses a particular chirality, Tsvelik said.

Based on their understanding of material properties, the scientists predicted what properties chiral spin liquids with such arrangements should have, and then used theoretical calculations to support their ideas. The paper even includes the chemical formula of a particular material they’d like experimental researchers to explore.

In essence, Tsvelik said, the material must be a layered metal, where the spins are located in well-separated layers and where the localized magnetic moments can coexist with conduction electrons. It must also respond strongly to a non-uniform magnetic field with a particular periodicity—similar to the way the external vibrations of an opera singer’s voice can shatter a glass that vibrates at the same resonant frequency as the note. But don’t expect the metal to shatter, Tsvelik said.

What can we expect if such as chiral spin liquid is discovered? Tsvelik doesn’t have specific predictions.

“If you look at the history of science—from the discovery of mechanics to the electron to splitting the atom—it has never been driven by applications. Many times applications eventually emerge, even giant ones, such as those that triggered the Industrial Revolution, which sprung from the discoveries of Newton. But that is not what drives science,” he said.

This works was supported by the DOE Office of Science.