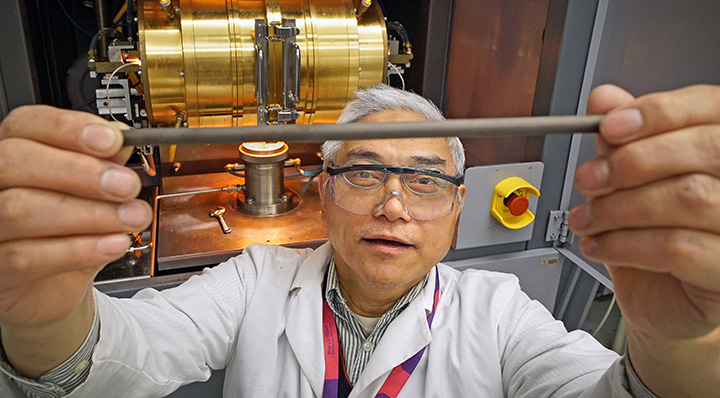 Physicist Genda Gu holds a single-crystal rod of LBCO—a compound made of lanthanum, barium, copper, and oxygen—in Brookhaven's state-of-the-art crystal growth lab. The infrared image furnace he used to synthesize these high-quality crystals is pictured in the background.

UPTON, NY—A team of scientists has detected a hidden state of electronic order in a layered material containing lanthanum, barium, copper, and oxygen (LBCO). When cooled to a certain temperature and with certain concentrations of barium, LBCO is known to conduct electricity without resistance, but now there is evidence that a superconducting state actually occurs above this temperature too. It was just a matter of using the right tool—in this case, high-intensity pulses of infrared light—to be able to see it.

Reported in a paper published in the Feb. 2 issue of Science, the team’s finding provides further insight into the decades-long mystery of superconductivity in LBCO and similar compounds containing copper and oxygen layers sandwiched between other elements. These “cuprates” become superconducting at relatively higher temperatures than traditional superconductors, which must be frozen to near absolute zero (minus 459 degrees Fahrenheit) before their electrons can flow through them at 100-percent efficiency. Understanding why cuprates behave the way they do could help scientists design better high-temperature superconductors, eliminating the cost of expensive cooling systems and improving the efficiency of power generation, transmission, and distribution. Imagine computers that never heat up and power grids that never lose energy.

“The ultimate goal is to achieve superconductivity at room temperature,” said John Tranquada, a physicist and leader of the Neutron Scatter Group in the Condensed Matter Physics and Materials Science Department at the U.S. Department of Energy’s (DOE) Brookhaven National Laboratory, where he has been studying cuprates since the 1980s. “If we want to do that by design, we have to figure out which features are essential for superconductivity. Teasing out those features in such complicated materials as the cuprates is no easy task.”

The copper-oxygen planes of LBCO contain “stripes” of electrical charge separated by a type of magnetism in which the electron spins alternate in opposite directions. In order for LBCO to become superconducting, the individual electrons in these stripes need to be able to pair up and move in unison throughout the material.

Previous experiments showed that, above the temperature at which LBCO becomes superconducting, resistance occurs when the electrical transport is perpendicular to the planes but is zero when the transport is parallel. Theorists proposed that this phenomenon might be the consequence of an unusual spatial modulation of the superconductivity, with the amplitude of the superconducting state oscillating from positive to negative on moving from one charge stripe to the next. The stripe pattern rotates by 90 degrees from layer to layer, and they thought that this relative orientation was blocking the superconducting electron pairs from moving coherently between the layers.

“This idea is similar to passing light through a pair of optical polarizers, such as the lenses of certain sunglasses,” said Tranquada. “When the polarizers have the same orientation, they pass light, but when their relative orientation is rotated to 90 degrees, they block all light.”

However, a direct experimental test of this picture had been lacking—until now.

One of the challenges is synthesizing the large, high-quality single crystals of LBCO needed to conduct experiments. “It takes two months to grow one crystal, and the process requires precise control over temperature, atmosphere, chemical composition, and other conditions,” said co-author Genda Gu, a physicist in Tranquada’s group. Gu used an infrared image furnace—a machine with two bright lamps that focus infrared light onto a cylindrical rod containing the starting material, heating it to nearly 2500 degrees Fahrenheit and causing it to melt—in his crystal growth lab to grow the LBCO crystals.

Collaborators at the Max Planck Institute for the Structure and Dynamics of Matter and the University of Oxford then directed infrared light, generated from high-intensity laser pulses, at the crystals (with the light polarization in a direction perpendicular to the planes) and measured the intensity of light reflected back from the sample. Besides the usual response—the crystals reflected the same frequency of light that was sent in—the scientists detected a signal three times higher than the frequency of that incident light.

University of Hamburg theorists supported this experimental observation with analysis and numerical simulations of the reflectivity.

This research provides a new technique to probe different types of electronic orders in high-temperature superconductors, and the new understanding may be helpful in explaining other strange behaviors in the cuprates.

The work performed at Brookhaven was supported by DOE’s Office of Science.