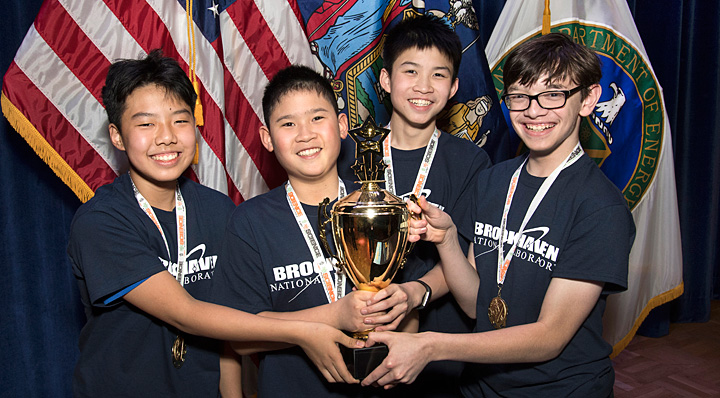 UPTON, NY – In a fast-paced question-and-answer showdown, Great Neck South Middle School’s Team 1 edged out William Floyd Middle School’s Team 2 to take first place in the Long Island Regional Middle School Science Bowl held at the U.S. Department of Energy’s (DOE) Brookhaven National Laboratory on Saturday, Mar. 3. Great Neck South competed against 18 other teams from across Long Island in one of the nation's regional competitions of the 27th Annual DOE National Science Bowl® (NSB). As the winning team, they will be awarded an all-expenses-paid trip to the National Finals in Washington, D.C., scheduled for Apr. 26-30.

A series of 112 regional middle school and high school tournaments are being held across the country from January through March. Teams from diverse backgrounds are each made up of four students, one alternate, and a teacher who serves as an advisor and coach. These teams face off in a fast-paced question-and-answer format where they are tested on a range of science disciplines including biology, chemistry, Earth science, physics, energy, and math.

“The National Science Bowl® continues to be one of the premier academic competitions across the country and prepares America’s students for future successes in some of the world’s fastest growing fields in science, technology, and engineering,” said U.S. Secretary of Energy Rick Perry.  “I am proud to oversee a Department that provides such a unique and empowering opportunity for our nation’s students, and I am honored to congratulate Great Neck South Middle School in advancing to the National Finals, where they will continue to showcase their talents as the top minds in math and science.” 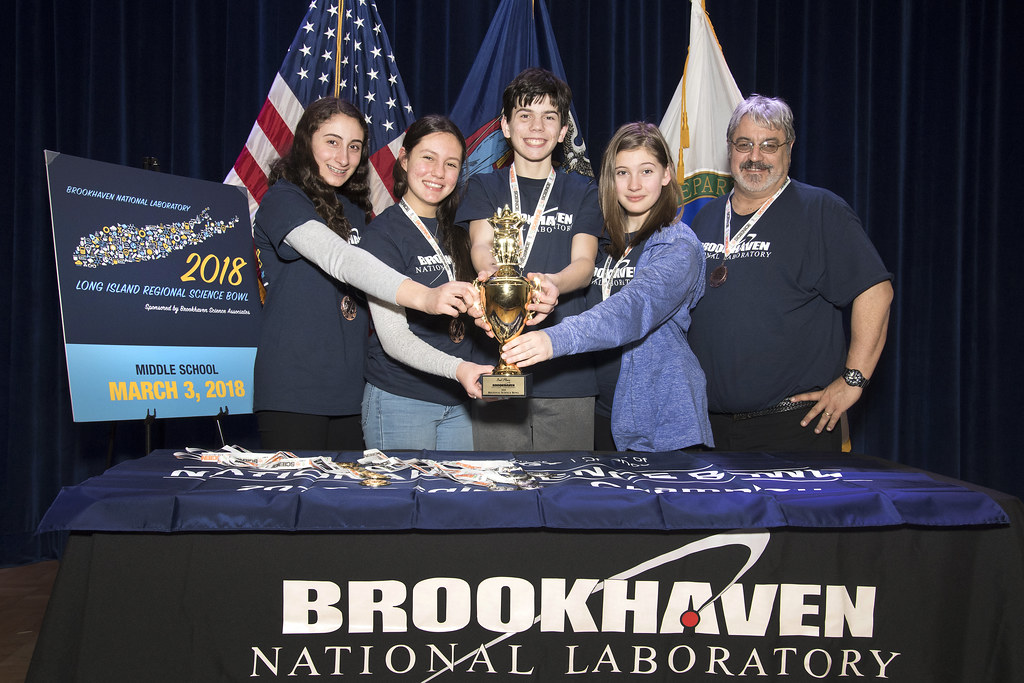 Adding to the excitement this year was the “reunion” of six students who participated in   science bowls held at the Lab several years ago when they were attending Farmingdale High School.

“Pete Macchia, a science teacher from Farmingdale High School, has been a coach and regular participant at our educational program events,” said Kenneth White, manager of the Lab’s Educational Program Office. “We reached out to him to ask if he knew of anyone who might be willing to volunteer at our event. We were pleasantly surprised when six Farmingdale High School graduates showed up ready to volunteer! It is worth noting that all of these students went on to pursue STEM careers (science, technology, engineering, and mathematics) — a good indicator that educational programs and competitions such as the science bowl, are helping to motivate our next generation of STEM workers,” added White.

In the competition at Brookhaven Lab, participating students received a Science Bowl t-shirt and winning teams also received trophies, medals, and banners. Prizes were courtesy of Brookhaven Lab's event sponsor, Brookhaven Science Associates, the company that manages and operates the Lab for DOE.

Approximately 275,000 students have participated in the NSB since it was established in 1991, and it is one of the nation's largest science competitions.