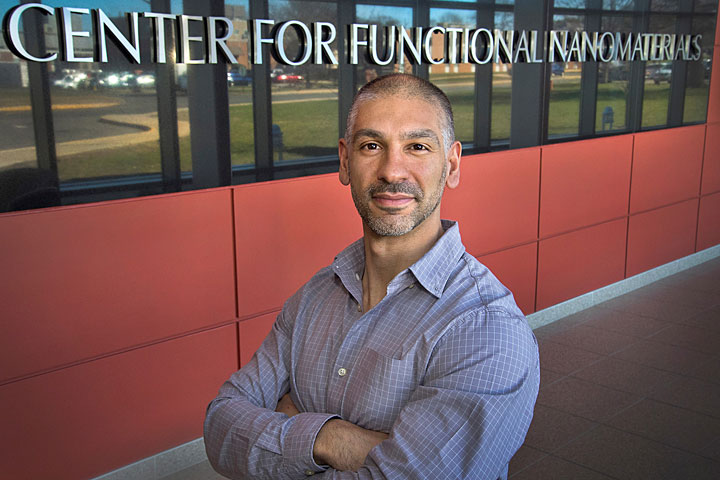 Chemical physicist Matthew Sfeir at Brookhaven Lab's Center for Functional Nanomaterials, where he studies the unique optical processes of nanoscale materials and translates the resulting discoveries into technologies.

UPTON, NY—Matthew Sfeir, a chemical physicist developing enabling technologies for next-generation electronic devices at the U.S. Department of Energy’s (DOE) Brookhaven National Laboratory, has been selected as an “Inventor of the Year” by the global science and technology organization Battelle. In collaboration with Stony Brook University, Battelle manages Brookhaven Lab through the company Brookhaven Science Associates. The annual awards recognize individuals who have made significant scientific or engineering contributions with important societal or financial impacts. Sfeir was honored on April 27 during a ceremony at the Columbus Museum of Art in Ohio.

Sfeir is being recognized for his work in the Electronic Nanomaterials Group at the Center for Functional Nanomaterials (CFN)—a DOE Office of Science User Facility at Brookhaven and one of five DOE Nanoscale Science Research Centers. For the past decade at the CFN, Sfeir has been studying the most basic photophysical properties (those induced by light) of materials and translating the resulting discoveries into technologies. In particular, he has recently made significant advancements in two areas: thin-film optical devices and solar cell materials.

“It was a great honor to represent Brookhaven at the Battelle Celebration of Solvers Event,” said Sfeir. “My work exploiting the unique optical processes of nanoscale materials is made possible by the unique collaborative environment at the CFN.”

Using low-cost metal oxide nanoparticles, Sfeir developed a laser that has a record-setting low-power threshold for operation. Moreover, this laser can be easily integrated with silicon microelectronics and other electronic devices. He also demonstrated the promise of using organic semiconductors in infrared-light photodetectors, which have applications in communications, medicine, defense, and sensing.

In the area of solar cell materials, Sfeir led the development of two inventions with the potential to radically improve solar cell performance: nanoarchitectures that take advantage of light-matter interactions to increase light absorption in a photovoltaic anode, and classes of materials that can split single incoming photons of light into multiple electrical charge carriers, thereby increasing the maximum theoretical efficiency of solar cells.

Sfeir earned his PhD and master’s degree in chemical physics from Columbia University in 2005 and 2001, respectively, and a bachelor’s degree in chemistry from the University of Chicago in 2000. He first joined Brookhaven Lab in 2005 as a postdoctoral research associate in the Condensed Matter Physics and Materials Science Department. In 2009, he became an assistant scientist at the CFN, and subsequently was promoted to associate scientist in 2011, scientist in 2014, and scientist with a continuing appointment in 2016. Since 2017, he has been an adjunct professor in the School of Chemistry, Chemical Engineering and Life Sciences, at Wuhan University of Technology in China.

Sfeir has a long history of recognitions associated with his frontier work in photophysics. He was the co-recipient of the 2011 R&D 100 Award and Microscopy Today Innovation Award, both recognizing his co-development of a multimodal optical nanoprobe for advanced electron microscopy. Last year, he was inaugurated as one of the distinguished foreign experts of the Hundred Talents Program of Hubei Province in China. He serves on several committees and advisory boards, including the executive committee for the Energy Subdivision of the American Chemical Society Division of Physical Chemistry and the External Advisory Board of Columbia University’s Materials Research Science and Engineering Center. To date, he has delivered 50 invited talks, co-authored more than 80 journal articles, and secured five patents.