The following news release on a ground-breaking neutrino experiment known as PROSPECT was issued by the PROSPECT collaboration. Scientists from the U.S. Department of Energy’s Brookhaven National Laboratory, continuing their long history exploring these elusive subatomic particles, made important contributions to this experiment. For more information about Brookhaven Lab’s role, see the sidebar and this related story. To speak with a Brookhaven Lab scientist about this work, contact Karen McNulty Walsh, 631 344-8350, kmcnulty@bnl.gov. 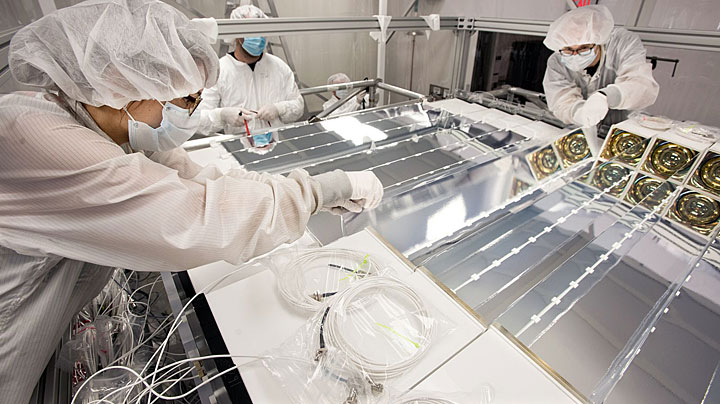 The Precision Reactor Oscillation and Spectrum Experiment (PROSPECT) has completed the installation of a novel antineutrino detector that will probe the possible existence of a new form of matter.

PROSPECT, located at the High Flux Isotope Reactor (HFIR) at the Department of Energy’s Oak Ridge National Laboratory (ORNL), has begun taking data to study electron antineutrinos that are emitted from nuclear decays in the reactor to search for so-called sterile neutrinos and to learn about the underlying nuclear reactions that power fission reactors.

Antineutrinos are elusive, elementary particles produced in nuclear beta decay. The antineutrino is an antimatter particle, the counterpart to the neutrino.

Scientists from the U.S. Department of Energy’s Brookhaven National Laboratory have made important contributions to the PROSPECT experiment now installed at the High Flux Isotope Reactor (HFIR) at Oak Ridge National Laboratory. The neutrino and nuclear chemistry group of Brookhaven Lab’s chemistry department developed and produced the detection medium that fills the detector—a unique, lithium-doped liquid scintillator. Engineers and physicists in the Lab’s physics department designed the shielding, which was particularly challenging because such a surface-based neutrino detector is subject to background signals created by cosmic rays. In addition, Brookhaven Lab engineers and physicists designed an air-cushioned transport system that allows the 75,000-pound PROSPECT detector assembly to be moved to different distances from the nuclear reactor to improve the experiment’s sensitivity to sterile neutrinos. The Brookhaven team, in collaboration with scientists at Temple University, also developed and deployed a unique calibration technique using tiny amounts of radioactive isotopes in the liquid scintillator. This work by scientists in Brookhaven’s physics and chemistry departments is part of a series of ongoing collaborations and leadership roles in international projects that are investigating fundamental properties of neutrinos and developing advanced detection technologies, building on the Lab’s long history exploring these elusive subatomic particles.

“Neutrinos are among the most abundant particles in the universe,” said Yale University physicist Karsten Heeger, principal investigator and co-spokesperson for PROSPECT. “The discovery of neutrino oscillation has opened a window to physics beyond the Standard Model of Physics. The study of antineutrinos with PROSPECT allows us to search for a previously unobserved particle, the so-called sterile neutrino, while probing the nuclear processes inside a reactor.”

Over the past few years several neutrino experiments at nuclear reactors have detected fewer antineutrinos than scientists had predicted, and the energy of the neutrinos did not match expectations. This, in combination with earlier anomalous results, led to the hypothesis that a fraction of electron antineutrinos may transform into sterile neutrinos that would have remained undetected in previous experiments.

The installation of PROSPECT follows four years of intensive research and development by a collaboration of more than 60 participants from 10 universities and four national laboratories.

“The development of PROSPECT is based on years of research in the detection of reactor antineutrinos with surface-based detectors, an extremely challenging task because of high backgrounds,” said PROSPECT co-spokesperson Pieter Mumm, a scientist at the National Institute of Standards and Technology (NIST).

The experiment uses a novel antineutrino detector system based on a segmented liquid scintillator detector technology. The combination of segmentation and a unique, lithium-doped liquid scintillator formulation allows PROSPECT to identify particle types and interaction points. These design features, along with extensive, tailored shielding, will enable PROSPECT to make a precise measurement of neutrinos in the high-background environment of a nuclear reactor.

PROSPECT’s detector technology also may have applications in the monitoring of nuclear reactors for non-proliferation purposes and the measurement of neutrons from nuclear processes.

“The successful operation of PROSPECT will allow us to gain insight into one of the fundamental puzzles in neutrino physics and develop a better understanding of reactor fuel, while also providing a new tool for nuclear safeguards,” said co-spokesperson Nathaniel Bowden, a scientist at Lawrence Livermore National Laboratory and an expert in nuclear non-proliferation technology.

After two years of construction and final assembly at the Yale Wright Laboratory, the PROSPECT detector was transported to HFIR in early 2018. 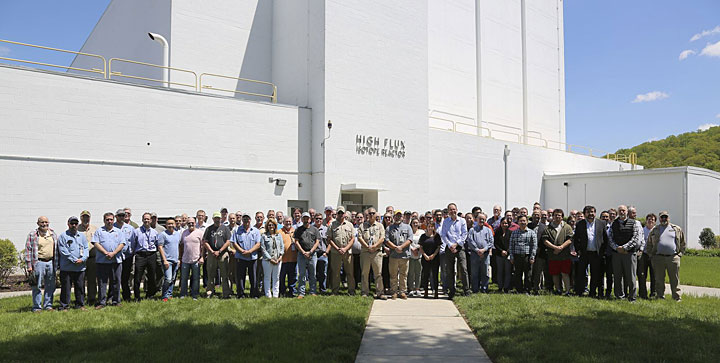 “The development and construction of PROSPECT has been a significant team effort, making use of the complementary expertise at U.S. national laboratories and universities,” said Alfredo Galindo-Uribarri, leader of the Neutrino and Advanced Detectors group in ORNL’s Physics Division.

PROSPECT is the latest in a series of fundamental science experiments located at HFIR. “We are excited to work with PROSPECT scientists to support their research,” said Chris Bryan, who manages experiments at HFIR for ORNL’s Research Reactors Division.

The experiment is supported by the U.S. Department of Energy Office of Science, the Heising-Simons Foundation, and the National Science Foundation. Additional support comes from Yale University, the Illinois Institute of Technology, and the Lawrence Livermore National Laboratory LDRD program. The collaboration also benefits from the support and hospitality of the High Flux Isotope Reactor, a DOE Office of Science User Facility, and Oak Ridge National Laboratory, managed by UT-Battelle for the U.S. Department of Energy.