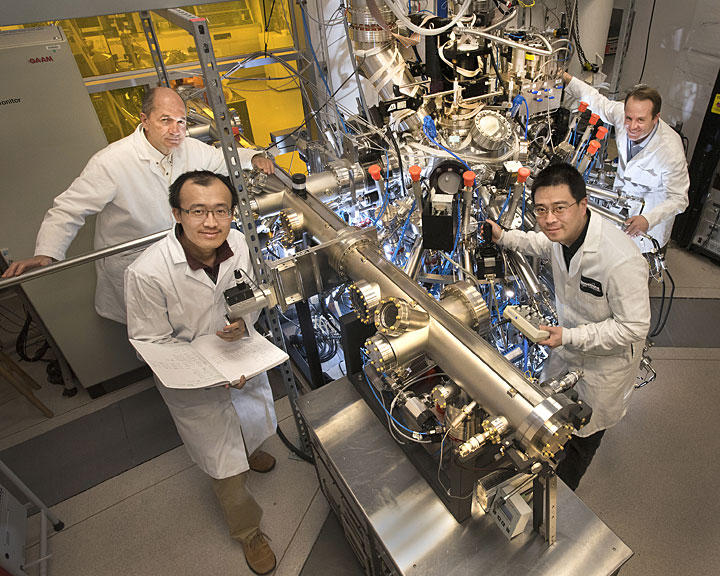 (Clockwise from back left) Brookhaven Lab physicists Ivan Bozovic, Anthony Bollinger, and Jie Wu, and postdoctoral researcher Xi He used the molecular beam epitaxy system seen above to synthesize perfect single-crystal thin films made of lanthanum, strontium, oxygen, and copper (LSCO). They brought these superconducting films to the National High Magnetic Field Laboratory to see how the electrical resistance of LSCO in its "strange" metallic state changes under extremely strong magnetic fields.

UPTON, NY—What happens when really powerful magnets—capable of producing magnetic fields nearly two million times stronger than Earth’s—are applied to materials that have a “super” ability to conduct electricity when chilled by liquid nitrogen? A team of scientists set out to answer this question in one such superconductor made of the elements lanthanum, strontium, copper, and oxygen (LSCO). They discovered that the electrical resistance of this copper-oxide compound, or cuprate, changes in an unusual way when very high magnetic fields suppress its superconductivity at low temperatures.

“The most pressing problem in condensed matter physics is understanding the mechanism of superconductivity in cuprates because at ambient pressure they become superconducting at the highest temperature of any currently known material,” said physicist Ivan Bozovic, who leads the Oxide Molecular Beam Epitaxy Group at the U.S. Department of Energy’s (DOE) Brookhaven National Laboratory and who is a coauthor of the Aug. 3 Science paper reporting the discovery. “This new result—that the electrical resistivity of LSCO scales linearly with magnetic field strength at low temperatures—provides further evidence that high-temperature superconductors do not behave like ordinary metals or superconductors. Once we can come up with a theory to explain their unusual behavior, we will know whether and where to search for superconductors that can carry large amounts of electrical current at higher temperatures, and perhaps even at room temperature.”

Cuprates such as LSCO are normally insulators. Only when they are cooled to some hundred degrees below zero and the concentrations of their chemical composition are modified (a process called doping) to a make them metallic can their mobile electrons pair up to form a “superfluid” that flows without resistance. Scientists hope that understanding how cuprates achieve this amazing feat will enable them to develop room-temperature superconductors, which would make energy generation and delivery significantly more efficient and less expensive.

In 2016, Bozovic’s group reported that LSCO’s superconducting state is nothing like the one explained by the generally accepted theory of classical superconductivity; it depends on the number of electron pairs in a given volume rather than the strength of the electron pairing interaction. In a follow-up experiment published the following year, they obtained another puzzling result: when LSCO is in its non-superconducting (normal, or “metallic”) state, its electrons do not behave as a liquid, as would be expected from the standard understanding of metals.

“The condensed matter physics community has been divided about this most basic question: do the behaviors of cuprates fall within existing theories for superconductors and metals, or are there profoundly different physical principles involved?” said Bozovic.

Continuing this comprehensive multipart study that began in 2005, Bozovic’s group and collaborators have now found additional evidence to support the latter idea that the existing theories are incomplete. In other words, it is possible that these theories do not encompass every known material. Maybe there are two different types of metals and superconductors, for example.

“This study points to another property of the strange metallic state in the cuprates that is not typical of metals: linear magnetoresistance at very high magnetic fields,” said Bozovic. “At low temperatures where the superconducting state is suppressed, the electrical resistivity of LSCO scales linearly (in a straight line) with the magnetic field; in metals, this relationship is quadratic (forms a parabola).” 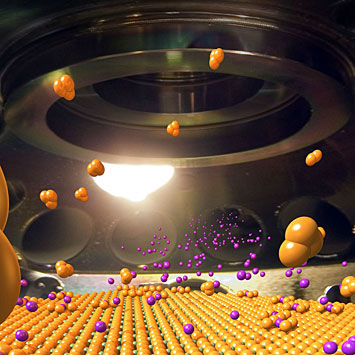 This composite image offers a glimpse inside the custom-designed molecular beam epitaxy system that the Brookhaven physicists use to create single-crystal thin films for studying the properties of superconducting cuprates.

In order to study magnetoresistance, Bozovic and group members Anthony Bollinger, Xi He, and Jie Wu first had to create flawless single-crystal thin films of LSCO near its optimal doping level. They used a technique called molecular beam epitaxy, in which separate beams containing atoms of the different chemical elements are fired onto a heated single-crystal substrate. When the atoms land on the substrate surface, they condense and slowly grow into ultra-thin layers, building a single atomic layer at a time. The growth of the crystal occurs in highly controlled conditions of ultra-high vacuum to ensure that the samples do not get contaminated.

“Brookhaven Lab’s key contribution to this study is this material synthesis platform,” said Bozovic. “It allows us to tailor the chemical composition of the films for different studies and provides the foundation for us to observe the true properties of superconducting materials, as opposed to properties induced by sample defects or impurities.”

The scientists then patterned the thin films onto strips containing voltage leads so that the amount of electrical current flowing through LSCO under an applied magnetic field could be measured.

They conducted initial magnetoresistivity measurements with two 9 Tesla magnets at Brookhaven Lab—for reference, the strength of the magnets used in today’s magnetic resonance imaging (MRI) machines are typically up to 3 Tesla. Then, they brought their best samples (those with the best structural and transport qualities) to the Pulsed Field Facility. Located at DOE’s Los Alamos National Laboratory, this international user facility is part of the National High Magnetic Field Laboratory, which houses some of the strongest magnets in the world. Scientists at the Pulsed Field Facility placed the samples in an 80 Tesla pulsed magnet, powered by quick pulses, or shots, of electrical current. The magnet produces such large magnetic fields that it cannot be energized for more than a very short period of time (microseconds to a fraction of a second) without destroying itself.

“This large magnet, which is the size of a room and draws the electricity of a small city, is the only such installation on this continent,” said Bozovic. “We only get access to it once a year if we are lucky, so we chose our best samples to study.”

In October, the scientists will get access to a stronger (90 Tesla) magnet, which they will use to collect additional magnetoresistance data to see if the linear relationship still holds. 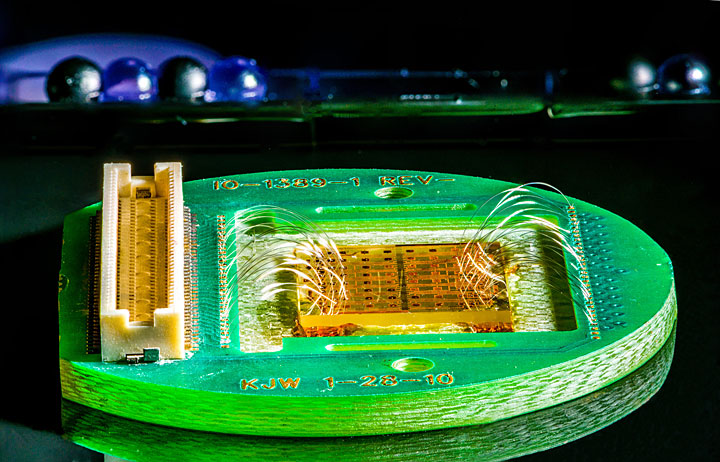 An example of a typical device that the scientists use to measure electrical resistivity as a function of temperature and magnetic field. The scientists grew the film via atomic layer-by-layer molecular beam epitaxy, patterned it into a device, and wire bonded it to a chip carrier.

“While I do not expect to see something different, this higher field strength will allow us to expand the range of doping levels at which we can suppress superconductivity,” said Bozovic. “Collecting more data over a broader range of chemical compositions will help theorists formulate the ultimate theory of high-temperature superconductivity in cuprates.”

In the next year, Bozovic and the other physicists will collaborate with theorists to interpret the experimental data.

“It appears that the strongly correlated motion of electrons is behind the linear relationship we observed,” said Bozovic. “There are various ideas of how to explain this behavior, but at this point, I would not single out any of them.”