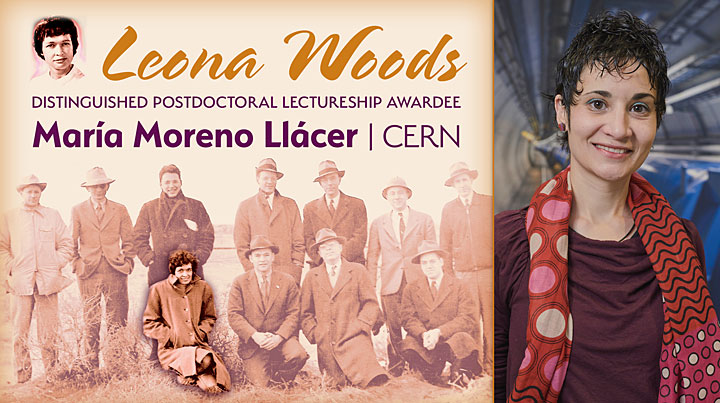 Brookhaven Lab has named María Moreno Llácer, a collaborator on the ATLAS experiment at the Large Hadron Collider (LHC) at the European Laboratory for Nuclear Research (CERN), a recipient of the Leona Woods Distinguished Postdoctoral Lectureship Award.

UPTON, NY—María Moreno Llácer, a member of the ATLAS experiment at the Large Hadron Collider (LHC) at the European Laboratory for Nuclear Research (CERN), has been named a recipient of the Leona Woods Distinguished Postdoctoral Lectureship Award. The award was established by the Physics Department at the U.S. Department of Energy’s Brookhaven National Laboratory in honor of renowned physicist Leona Woods to celebrate the scientific accomplishments of outstanding female physicists, physicists from under-represented minority groups, and LGBTQ physicists—and to promote diversity and inclusion in the department. Moreno Llácer will receive a prize of $1,000 and the opportunity to give a general-interest colloquium and a technical talk about her work during a weeklong stay at Brookhaven.

“I am really pleased to be receiving this special award in memory of an excellent scientist and a pioneer for women in physics,” Moreno Llácer said. “This award is celebrating women and I am very proud and honored to be representing young women scientists in this context.”

Moreno Llácer is helping to analyze the enormous ATLAS dataset of proton-proton collisions, at the highest energies ever achieved in a laboratory, to explore what the top quark—the heaviest fundamental particle in the Standard Model—can reveal about the origin of particle mass.

“The answers to these questions will shed light on what may lie beyond the Standard Model and can even have cosmological implications,” she added.

Moreno Llácer is looking forward to presenting her research at Brookhaven, and to discussing her work and all relevant aspects of any further improvements on these physics analyses with experts who have made similar measurements at previous experiments as well as theorists.

Talks to be given by Moreno Llácer:

“I am very privileged for having been able to pursue my sense of curiosity within one of the largest international collaborations in particle physics,” Moreno Llácer said. “A very special thanks to the selection committee for choosing me for this honor, and an enormous salute to all of the people who supported me.”