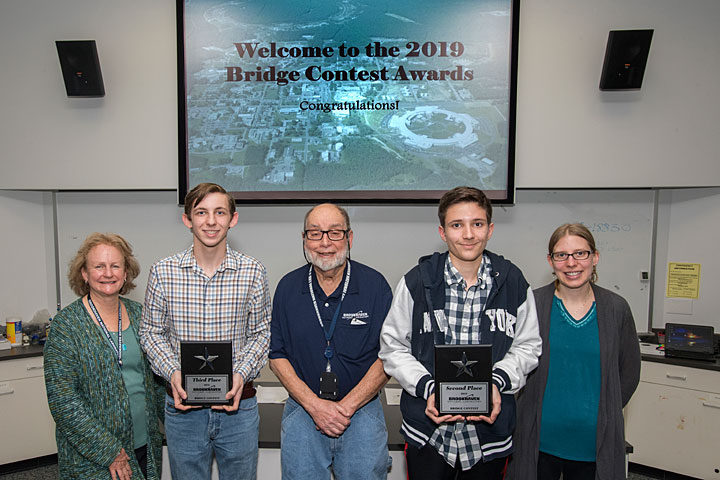 In this annual regional competition—coordinated by Brookhaven Lab’s Office of Educational Programs (OEP) —high-school students across Long Island, New York, design, construct, and test model bridges made of basswood that are intended to be simplified versions of real-world bridges. Participants must apply physics and engineering principles to meet a stringent set of specifications. Their bridges are judged based on efficiency, which is calculated using the weight of the bridge and the amount of weight it can support before breaking or bending more than one inch. A separate award is given to the student with the most aesthetic design.

A video of a bridge being crushed during the judging round.

An awards ceremony to honor the winners was held at Brookhaven Lab on March 15.

“One of the engineering feats that fascinates me the most is the transport of the muon g-2 ring from Brookhaven to Fermilab in Illinois in 2013,” said White. “Engineers had to design a way to delicately package this approximately 60-foot-wide electromagnet and move it by truck and ship without letting it flex more than one-eighth of an inch. Bridge building develops these kind of skills.”

Their remarks were followed by the presentation of the awards. 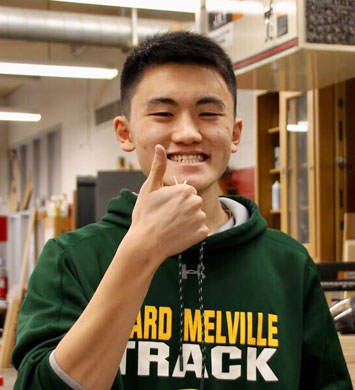 Zhang, whose bridge weighed 12.75 grams and had an efficiency of 2819.03, was unable to attend the ceremony because he was participating in the New York State Science Olympiad. Zhang’s father accepted the award on his behalf.

“I had built bridges, towers, and, more recently, boomilevers (kind of like the arm at the end of a crane) as a participant on my school’s Science Olympiad team and I really love civil engineering,” said Zhang. “So, the Bridge Building Contest perfectly fit both my past experience and interests. Through the competition, I was able to improve upon the ideas that I had developed in years prior working on engineering challenges and apply some new things that I had learned. It was particularly challenging for me to adjust to all the specific rules involved in the construction process. I wished that I had the chance to go to the awards ceremony and speak with the other competitors and learn from the engineers and scientists at Brookhaven.”

Gary Nepravishta, a freshman at Division Avenue High School in Levittown, took second place with his bridge weighing 18.2 grams and having an efficiency of 1949.45.

“I participated in Science Olympiad in middle school and won two medals for building things,” said Nepravishta. “I am very interested in the STEM [science, technology, engineering, and mathematics] fields, and I knew about the Bridge Building Contest because my brother had participated.”

With a mass of 13.88 grams and efficiency of 1598.68, the bridge built by senior William Musumeci of Smithtown High School East won third place.

“I have a background in woodworking, and I learned about the competition in my physics class at school,” said Musumeci, who will be attending Farmingdale University to study construction engineering. “I built one bridge and tested it to see where it broke, and then I used a computer-aided design program to make a stronger bridge.” 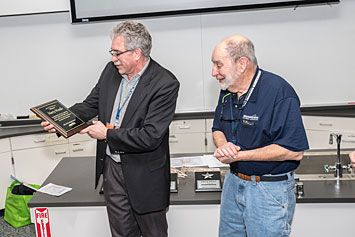 An honorary award was given to retired Brookhaven Lab engineer Marty Woodle, who was recognized for his 40 years of service as a volunteer for the competition. Woodle recounted how he spent his early career building the Saturn I booster for Apollo, designing and testing underwater grabbers and other submarine components, and developing cryogenic piping systems that carry liquefied natural gas onto ship tanks. He then described his long career as a mechanical engineer at Brookhaven Lab’s National Synchrotron Light Source (NSLS), a former DOE Office of Science User Facility that has since been replaced by NSLS-II.

“If you become an engineer, you are not necessarily trapped into one little aspect of science,” said Woodle. “The world is open to you to do some really fascinating work.”

The bridges of the two top winners have been entered into the 2019 International Bridge Building Contest, to be held in Baltimore, Maryland, in early April.