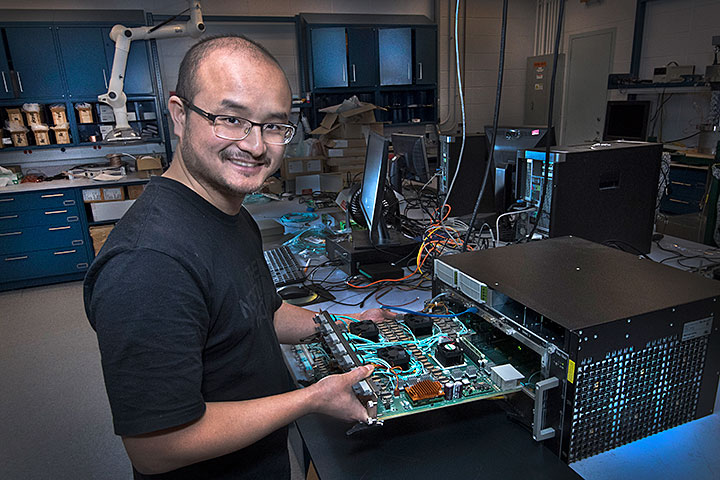 Brookhaven physicist Shaochun Tang is shown with the new ATLAS trigger board he designed and engineered for the U.S. ATLAS Phase I Upgrade project.

UPTON, NY—The ATLAS experiment at CERN’s Large Hadron Collider (LHC) is ready to begin another chapter in its search for new physics. A significant upgrade to the experiment, called the ATLAS Phase I Upgrade, has received Critical Decision-4 approval from the U.S. Department of Energy (DOE), signifying the completion of the U.S. portion of the project and a transition to operations.

“This milestone will enable us to push the boundaries of our understanding, following the discovery of the Higgs boson at CERN, which resulted in the 2013 Nobel Prize in Physics,” said Project Director Jonathan Kotcher, a senior scientist at DOE’s Brookhaven National Laboratory. “The completion of this project is a major step in the physics campaign being mounted at the energy frontier, which integrates state-of-the-art accelerator and detector technology to probe the fundamental forces and particles of nature. We are very excited to turn to the physics and data analysis that all this hard work has enabled.”

Led by Brookhaven Lab and Stony Brook University (SBU), the U.S. ATLAS Phase I Upgrade is the initial stage of a larger upgrade planned for the LHC—the High Luminosity Large Hadron Collider (HL-LHC) project. The goal is to substantially increase the LHC’s luminosity, enabling scientists to collect 10 times more data from particle collisions, observe very rare processes, and make new discoveries about the building blocks of matter. But first, long-term experiments like ATLAS needed to undergo initial upgrades to prepare for the coming years before the LHC will transition to the HL-LHC mode.

“The ATLAS experiment has been at the forefront of high-energy particle physics exploration and discoveries for a decade now,” said Deputy Project Manager Marc-André Pleier, a physicist at Brookhaven. “While we have learned a lot so far, our current understanding of the universe cannot explain phenomena such as dark matter, dark energy, or antimatter/matter asymmetry. Providing these detector upgrades for ATLAS will enable us to study even rarer processes than ever before and shed light on poorly understood or unexplored corners of our understanding of how the universe works."

“The U.S. ATLAS Phase I Upgrade involved building modern electronics to replace ageing elements with more efficient ones, but it also provided the experiment with new and improved functionalities,” said Project Manager Christopher Bee, a senior scientist at SBU.

Specifically, the project focused on three components of ATLAS: the trigger/data acquisition system, the liquid argon calorimeter, and the forward muon detector (known as the New Small Wheel). Combined, upgrades to these three components will provide scientists with the ability to collect data more efficiently and at higher data collection rates.

“Every second, there are several billion proton-proton collision events detected by ATLAS, but only a few hundred are recorded,” said Bee. Those events are selected by the trigger system, which sifts through a wealth of uninteresting events to find ones that may point to new physics or rare Standard Model events. “The data acquisition system moves data from the detector through the trigger system, and then it puts the selected events onto storage for further analysis. Upgrades to this system will improve its ability to select key events.”

Upgrades to the calorimeter electronics will increase the precision of data coming out of the calorimeter detector. The New Small Wheel will dramatically improve ATLAS’s triggering capability and efficiency for events with muons, subatomic particles known as the “heavy cousins” of electrons.

“In the experiment’s initial runs, the muon trigger had a substantial ‘fake’ muon rate,” said Pleier. “It was giving the ‘OK’ to accept a large fraction of events that were not interesting. The principle goal of the new small wheel is to reduce the fake trigger rate dramatically.”

12 U.S. universities and DOE’s Argonne National Laboratory collaborated with Brookhaven Lab and SBU to complete the U.S. ATLAS Phase I Upgrade on time and under budget. This $44 million upgrade project was supported by DOE ($33 million) and the National Science Foundation (NSF) ($11 million).

“We very much appreciate the support from both DOE and NSF that has allowed us to realize our goals in helping prepare ATLAS for a bright future,” said Bee. “We look forward to capitalizing on the new scientific opportunities enabled by these upgrades.”