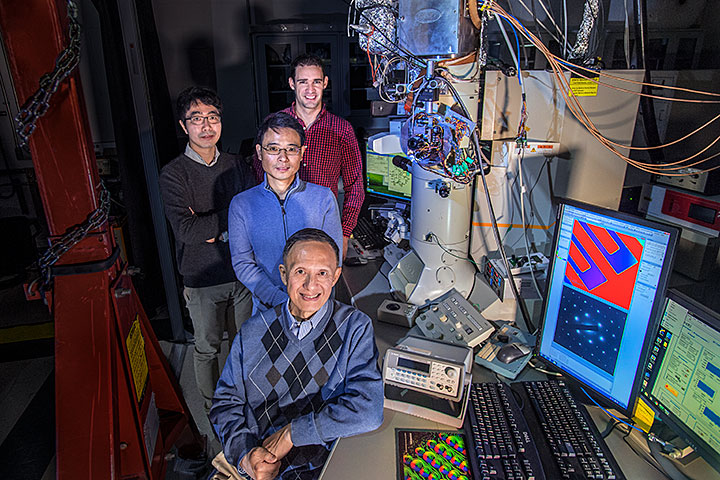 Senior physicist and group leader Yimei Zhu (sitting front) of Brookhaven Lab's Condensed Matter Physics and Materials Science Division and scientists and engineers at Euclid TechLabs, the National Institute of Standards and Technology, and JEOL USA received a 2019 R&D 100 Award for an electron beam pulser they developed. The pulser enables conventional transmission electron microscopes to capture ultrafast material processes—such as atomic vibration and charge transfer—without the need for complex and expensive pulsed lasers. Standing behind Zhu is Brookhaven research associate Xuewen Fu, who has been demonstrating the capabilities of the pulser in probing ultrafast processes. In the far back is Euclid engineer Hyeokmin Choe (left) and Stony Brook University graduate student Chase Rendall, who are working on the device's applications to biological molecules and quantum materials, respectively.

UPTON, NY—The U.S. Department of Energy’s (DOE) Brookhaven National Laboratory, Euclid TechLabs LLC, the National Institute of Standards and Technology (NIST), and JEOL have won a 2019 R&D 100 Award for the development of the “Affordable Laser-free Retrofittable Stroboscopic Solution for Ultrafast Electron Microscopy.” Recognized by R&D World magazine as among the top 100 innovations of the year, their solution is an electron beam pulser for transmission electron microscope (TEM)-based imaging of the dynamic behaviors of materials over very short timescales, without the need for complex and expensive pulsed lasers.

Since 1962, the annual R&D 100 Awards have been recognizing revolutionary ideas in science and technology. A judging panel consisting of more than 40 professionals from academia, industry, and government selected this year’s winners.

“These 100 winning products and technologies are the disruptors that will change industries and make the world a better place in the coming years,” said Paul J. Heney, vice president and editorial director of R&D World.

Brookhaven’s award is one of many given to DOE national labs this year.

“These awards recognize the incredible value our National Laboratories deliver in the form of groundbreaking ideas that, if successful, stand to transform how we live our lives,” said U.S. Secretary of Energy Rick Perry. “We are enormously proud of our Labs’ ability to continually redefine what’s possible, helping to ensure a more prosperous and secure future for our nation.”

Because of their superb spatial resolution down to a fraction of an angstrom, or one hundred-millionth of a centimeter, TEMs are powerful tools for determining the atomic and electronic structure of various materials, including high-temperature superconductors, ferroelectric and ferromagnetic (spontaneous electric and magnetic polarization) devices, nanoscale quantum systems for neuromorphic (brain-inspired) computing, catalysts, and batteries. However, conventional TEMs have a video rate of about 30 frames per second, or 33 milliseconds—too slow to capture atomic vibration, lattice motion, charge transfer, ion transport, electric and magnetic switching, and other dynamic processes in these materials. This limitation is largely due to the fact that the electron beam produced in TEMs is continuous rather than pulsed.

Over the past 15 years, TEMs outfitted with pulsed lasers that generate electron bunches have made it possible to explore such dynamic processes. However, these laser-based ultrafast TEMs are extremely complex and costly, involve significant TEM modifications, and require specialists to operate the laser system.

The team’s solution was to replace the lasers with an electron pulser. They used accelerator technology to “chop” the continuous waveforms of electrons (electrons have wave-like properties, oscillating at a certain frequency) into ultrashort pulses down to 10 picoseconds (a picosecond is one-trillionth of a second) with high repetition rates (megahertz to gigahertz) for ultrafast TEM experiments in stroboscopic mode. In this mode, pulses are repetitively cycled to create a time-resolved image, similar to how film reels are made up of a series of individual pictures that when viewed in quick succession give the appearance of continuous motion. The frequency of the pulses can be tuned based on the natural time scale of the particular phenomenon of interest—for instance, a metal-insulator transition or spin-wave propagation. As long as the phenomenon is repeatable, the process can be captured.

“Combing accelerator technology with electron microscopy is unprecedented,” said team member Yimei Zhu, a senior physicist and leader of the Electron Microscopy and Nanostructure Group in Brookhaven Lab’s Condensed Matter Physics and Materials Science Division. Zhu and NIST staff scientist June Lau, a former student of Zhu’s, proposed the idea for the electron pulser and brought it to Euclid, an R&D company specializing in accelerator development. “In the past five years, the collaboration has not only resulted in a few significant scientific publications and U.S. patents but also a derivable product that can be retrofit into commercial TEMs.” 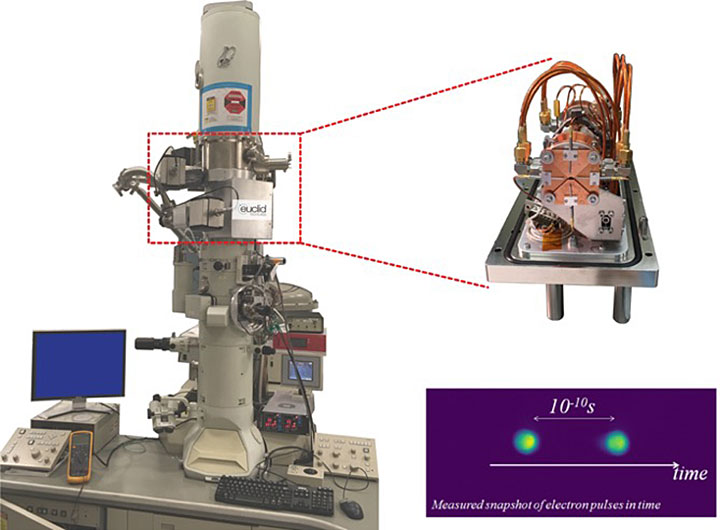 The electron beam pulser (enlarged in the top right image) can be retrofit into existing commercial transmission electron microscopes to turn a normally continuous waveform of electrons into a pulsed beam for stroboscopic ultrafast experiments. The purple box shows a pulsed beam with a time separation of 100 picoseconds.

The team developed and constructed the electron pulser at Euclid, tested the device in a TEM at JEOL USA headquarters, and then installed it in NIST and Brookhaven TEMs, which operate at different voltages. They have since been conducting different experiments to explore the capabilities of the device, including whether it can be used to probe ultrafast dynamics in materials with strongly correlated electrons and even in biological samples. The high-energy electron beams typically used in TEMs are known to damage biological samples by breaking atomic bonds; however, if the broken bonds can self-heal in between the pulses, the radiation damage might be mitigated.

“I am really excited about the opportunity to work with electron microscopists,” said Euclid Vice President for Engineering Chunguang Jing. “I hope our collaborative efforts will lead to a useful commercial product that can impact the field of electron microscopy.”

“This technology brings us into unchartered territory,” said Zhu. “Now, we can not only do time-resolved measurements but we also may be able to see how biological molecules respond to external stimuli. We hope that our relatively inexpensive technology will provide the scientific community with a means to capture and understand the microstructure, electronic structure, and spin states of functional materials in required space and time domains.”

Brookhaven and its collaborators and the other winners were recognized at the R&D 100 Awards gala event in San Mateo, California, on December 5, during the 2019 R&D 100 Conference.