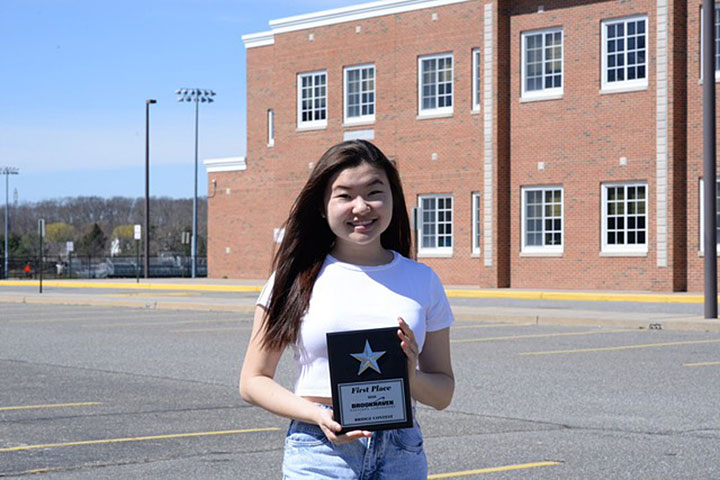 Students from 17 Nassau and Suffolk County high schools designed and constructed a total of 190 model bridges intended to be simplified versions of real-world bridges. In this contest, efficiency is calculated from the bridge’s weight and the weight the bridge can hold before breaking or bending more than one inch. The higher the efficiency, the better the design and construction.

Student competitors typically bring their bridges to the Lab to be tested. But for this year’s competition, to help maintain social distance during the developing coronavirus pandemic, engineers at Brookhaven ran the tests and broadcast them to the students virtually.

Learn about the bridge contest and watch the testing process.

Jessica Liao from Ward Melville High School took the top spot, building a bridge that weighed 17.25 grams and supported 59.44 pounds. Her bridge had an efficiency of 1562.98, the number of times its own weight the bridge held before breaking or bending more than one inch. 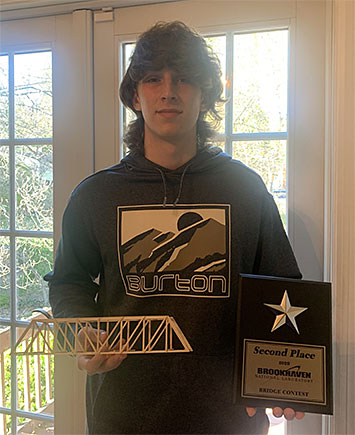 Aidan Wallace from Walt Whitman High School placed second with a bridge that weighed 17.54 grams, held 51.01 pounds, and had an efficiency of 1319.14.

Sophia Borovikova from Northport High School won the aesthetic award for the best-looking bridge. Her bridge took 10th place in the contest, weighing 16.17 grams and holding 33.29 pounds for an efficiency of 933.83.

The construction and testing of model bridges promotes the study and application of principles of physics and engineering and helps students develop "hands-on" skills, explained Ken White, manager of Brookhaven Lab’s Office of Educational Programs. Students get a flavor of what it is like to be engineers, designing structures to a set of specifications and then seeing the bridges they build perform their function. 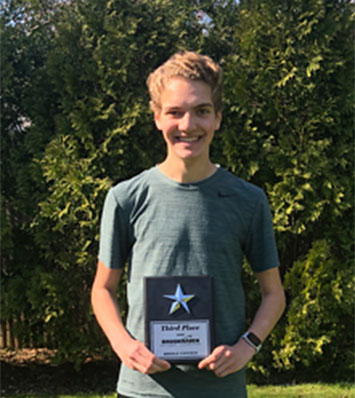 “These same skills are put to the test for the Lab’s engineers on projects like the National Synchrotron Light Source II (NSLS-II) and the Relativistic Heavy Ion Collider (RHIC), both world-class research tools that operate as DOE Office of Science user facilities for scientists from all across the world, and the upcoming Electron-Ion Collider,” said White. “Preparing the next generation of engineers to work on projects like these is important to the Lab and the Department of Energy.”

Brookhaven Lab's Office of Educational Programs coordinated the Regional Model Bridge Building Contest. Now, the two top winners—Liao and Wallace—are eligible to enter the 2020 International Bridge Building Contest in May. For this year’s contest, contestants will mail their bridges to the Illinois Institute of Technology in Chicago, where university faculty and engineers will run the breakage tests and post the results online.

Prior to COVID-19-related school closures on Long Island, Gillian Winters, a science teacher from Smithtown High School East, conducted a bridge competition in her classroom to help students prepare for the contest at Brookhaven. She also built a bridge of her own to compete among students. 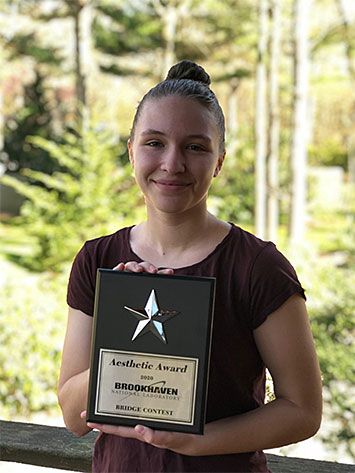 “My favorite part is to see the creativity the kids can come up with because they're all very different,” Winters said. “Some of them have a pretty straightforward way of doing things, and some of them want to put a new twist on things. I love to see how they develop, and by the end, they really have learned a little bit about how to follow the instructions and what a specification really means.”

“I really enjoyed the creative process—trying to figure out all of the different parts that are going to come together to form the bridge,” Borovikova, a senior at Northport High School, said. “Designing the bridge was actually a pretty quick process for me because I like to try to imagine concepts right off the top of my head. Then actually letting the bridge come to fruition was really interesting for me, because I saw my design come to life.”

Second place winner Aidan Wallace, a junior at Walt Whitman High School, said he spent many hours creating his bridge and making sure it would qualify.

“From this contest, I have learned more about hands-on building and the engineering of bridges,” he said. “I was happy with my results, but of course would have liked to place first!”

The award ceremony for the competition is currently pending, but the Lab hopes to hold it before the end of the academic year, according to Susan Frank, the competition coordinator and educator at the Lab’s Science Learning Center.