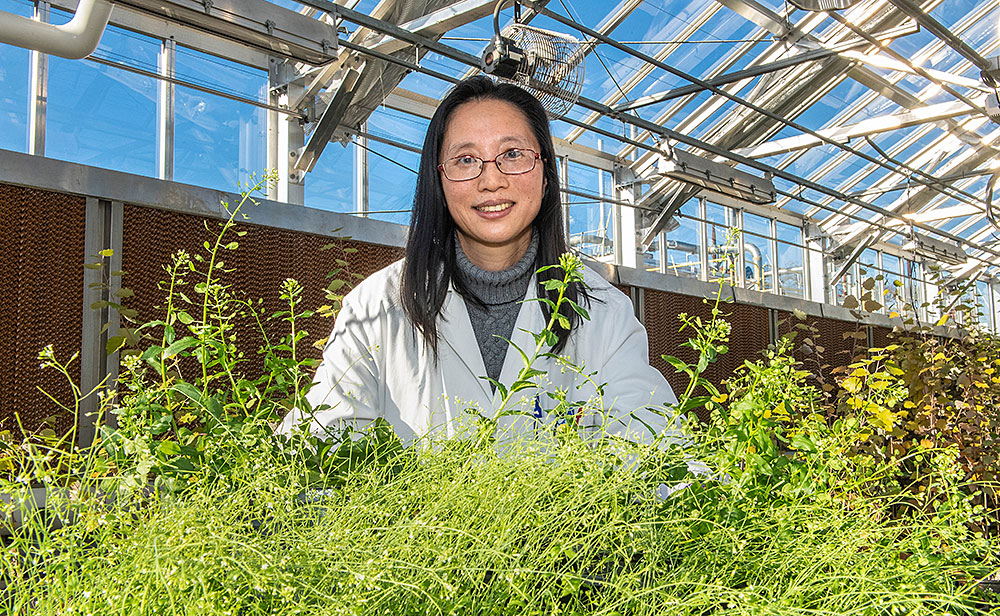 UPTON, NY – Hundreds of naturally occurring specialty fatty acids (building blocks of oils) have potential for use as raw materials for making lubricants, plastics, pharmaceuticals, and more—if they could be produced at large scale by crop plants. But attempts to put genes for making these specialty building blocks into crops have had the opposite effect: Seeds from plants with genes added to make specialty fatty acids accumulated dramatically less oil. No one knew why.

Now two teams of biochemists working on separate aspects of oil synthesis at the U.S. Department of Energy’s Brookhaven National Laboratory have converged to discover the mechanism behind the oil-production slowdown. As described in the journal Plant Physiology, they crossbred model plants and conducted detailed biochemical-genetic analyses to demonstrate a strategy for reversing the roadblock and ramping up production. The work paves the way for making at least one industrially important specialty fatty acid in plants—and may work for many others.

“Since scientists discovered the genes responsible for making specialty fatty acids several decades ago, we’ve dreamed of putting them into crop plants to make abundant renewable sources of desired fatty acids,” said John Shanklin, chair of Brookhaven Lab’s biology department, who oversaw the project. “But we’ve been stymied from using them because we didn’t know why they dramatically slow fatty acid and oil synthesis. A number of research groups have been trying to figure out why this happens. We have now nailed down the mechanism and opened up the possibility of achieving that dream.”

This study grew out of two separate projects in Shanklin’s biochemistry lab. One, led by Xiao-Hong Yu and Yuanheng Cai, was focused on the challenges associated with specialized fatty acid production in plants. The other, led by Jantana Keereetaweep, was deciphering details of the biochemical feedback loop plants use to regulate ordinary fatty acid and oil production.

Through that second project, the team recently characterized a mechanism by which plants down-regulate oil synthesis when levels of a plant’s regular (endogenous) fatty acids get too high.

“This system operates like a thermostat,” Shanklin explained. “When heat gets above its set point, the furnace turns off.” 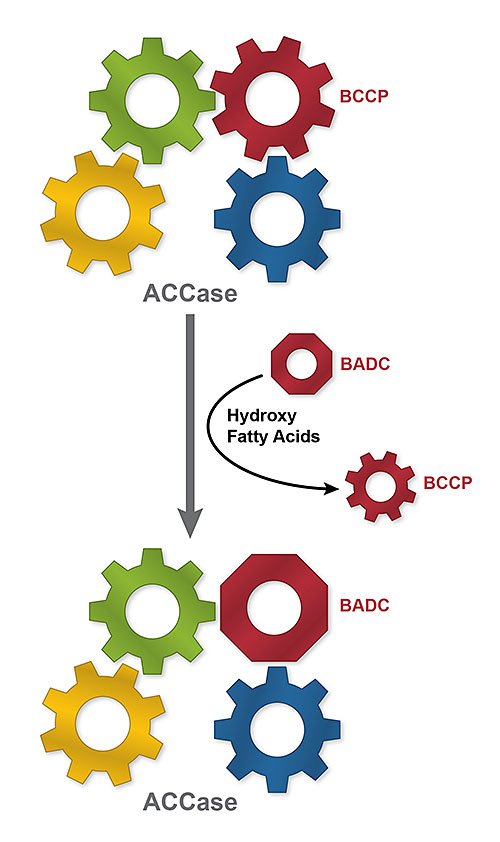 A plant enzyme called ACCase acts like a four-gear "machine" to crank out fatty acids, the building blocks of oil. High levels of ordinary fatty acids, or even small amounts of specialty hydroxy fatty acids, trigger a substitution in the machinery: BADC, which acts like a gear with no teeth, takes the place of BCCP, slowing production down. Plants bred to lack genes for making BADC could potentially produce large amounts of economically important fatty acids.

In contrast, the shutdown mechanism triggered by the specialty fatty acids (ones being produced by genes artificially added to the plant) kicks in when even small amounts of the “foreign” fatty acids are present, and endogenous fatty acids aren’t in excess. “Because of this, they appeared to be two separate processes,” Shanklin said.

But as the two teams discussed their projects, they began to wonder if the specialty fatty acids were triggering the same off switch triggered by high levels of ordinary fatty acids. “Imagine working in the same lab on different projects and in a lab meeting one day, you look at each other and ask, ‘Is it possible we’re working on the same thing?’” Shanklin said.

This idea provided a way for the teams to combine efforts on a new experiment.

Through earlier studies, Shanklin’s group had created a strain of Arabidopsis (a model plant) that has two of its BADC genes deleted. In these plants, the off switch is disabled and the plants crank out high levels of endogenous fatty acids. They wondered what would happen if the BADC genes were disabled in plants engineered to produce specialty fatty acids.

To find out, Xiao-Hong Yu and Yuanheng Cai designed a strategy to crossbreed the defective off-switch plants with an Arabidopsis strain engineered to produce hydroxy fatty acids—one of the specialty types scientists would like to produce for industrial applications. This latter strain could make the hydroxy fatty acids, but its rate of oil synthesis was only half that of normal plants and it accumulated much less oil in its seeds.

When crossing four separate genetic factors, it takes several plant generations to produce plants with the desired combination of genes: both deleted BADC genes and two genes that drive the production of hydroxy fatty acids, with two identical copies of each genetic factor.

“We were fortunate to have two very dedicated students working as interns through Brookhaven’s Office of Educational Programs—Kenneth Wei, who was then at Mount Sinai High School and is now at MIT, and Elen Deng, an undergraduate at Stony Brook University,” Yu said. “They did fantastic work running polymerase chain reaction (PCR) tests—similar to those used to test for COVID-19—to run detailed analyses of more than 600 plants to find those with the desired genetic makeup.”

Jantana Keereetaweep then worked with Yu to characterize those plants biochemically, to compare their rates of ACCase activity with those of the two Arabidopsis lines used to make the new genetic combinations.

The end result: Plants that had the combination of defective BADC genes and genes required for making hydroxy fatty acids produced normal levels of oil containing the specialty products. Compared with plants that had normal BADC genes, the new plants exhibited increases in the total amount of fatty acid per seed, the total seed oil content per plant, and the seed yield per plant.

“The BADC-defective plants are blind to the presence of hydroxy fatty acids and the usual response of turning off the ACCase—the oil-making machinery—is gone,” Keereetaweep said.

The results prove that BADC is the mechanism for reducing ACCase activity in both scenarios—the accumulation of excess endogenous fatty acids and the presence of hydroxy fatty acid.

“We are now testing to see if this mechanism is limited to hydroxy fatty acids, or, as we suspect, common to other ‘foreign’ fatty acids that also reduce ACCase activity,” Shanklin said. “If it’s a general mechanism, it opens the possibility of realizing the dream of making additional desired specialty fatty acids in the oil-rich seeds of crop plants,” Shanklin said.

“This is a good example where a fundamental mechanistic understanding of biochemical regulation can be deployed to enable progress towards a viable, sustainable bioeconomy,” Shanklin said. “We can use this approach to make valuable renewable industrial starting materials at low cost in plants from carbon dioxide and sunlight, instead of relying on petrochemicals.”

This study was supported by the DOE Office of Science and the National Science Foundation.