What follows is a sidebar to a press release issued today by the U.S. Department of Energy’s (DOE) Fermi National Accelerator Laboratory (Fermilab), describing new results from the Muon g-2 experiment moved to Fermilab from DOE’s Brookhaven National Laboratory. Brookhaven Lab will host a colloquium given by Brookhaven physicist Vladimir Tishchenko on Friday, April 9, 2021, at 11 a.m. U.S. Eastern Time to discuss the new result.

Background on Brookhaven Lab's Involvement in the Muon g-2 Experiment 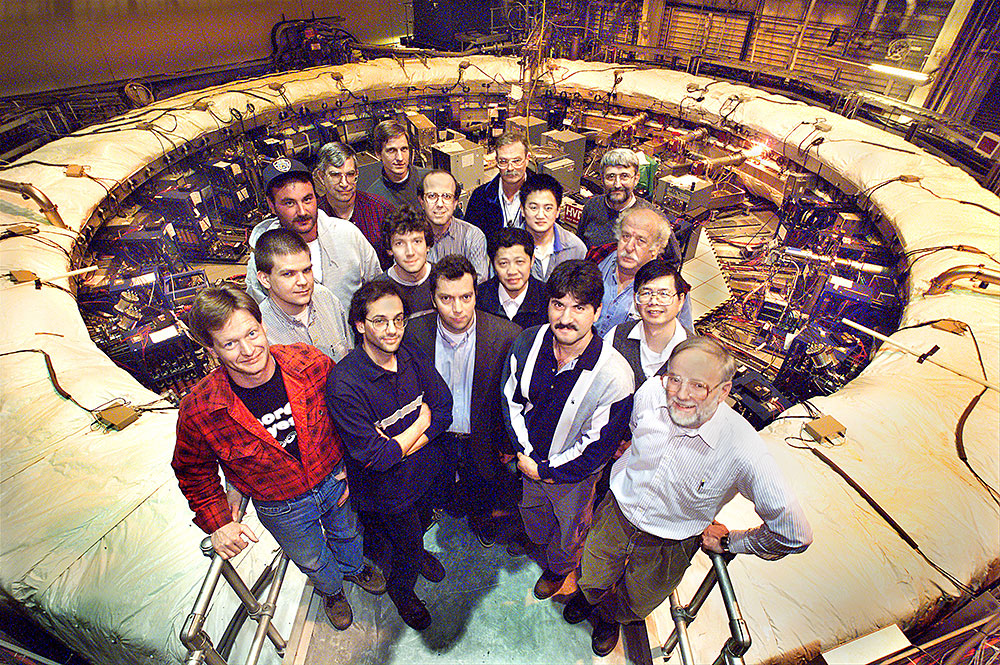 Brookhaven Lab’s experiment to produce “a precision measurement of the anomalous magnetic moment of the muon” (Muon g-2) was constructed from 1989 to 1996 and collected data from 1997 to 2001. The first analysis and subsequent follow-up revealed that there was poor agreement between the measurement and the Standard Model prediction.

That’s why it was so important to move the electromagnet used to store the circulating muons from Brookhaven Lab to Fermilab—to run the experiment with a more intense beam of muons and check this higher-precision experimental result against higher-precision theory calculations that have been performed in the intervening decades.

“Muon g-2 is just one number, but it includes many different parts of particle physics,” said Taku Izubuchi of Brookhaven Lab and the RIKEN BNL Research Center, who leads Brookhaven Lab’s effort on the Standard Model calculations. 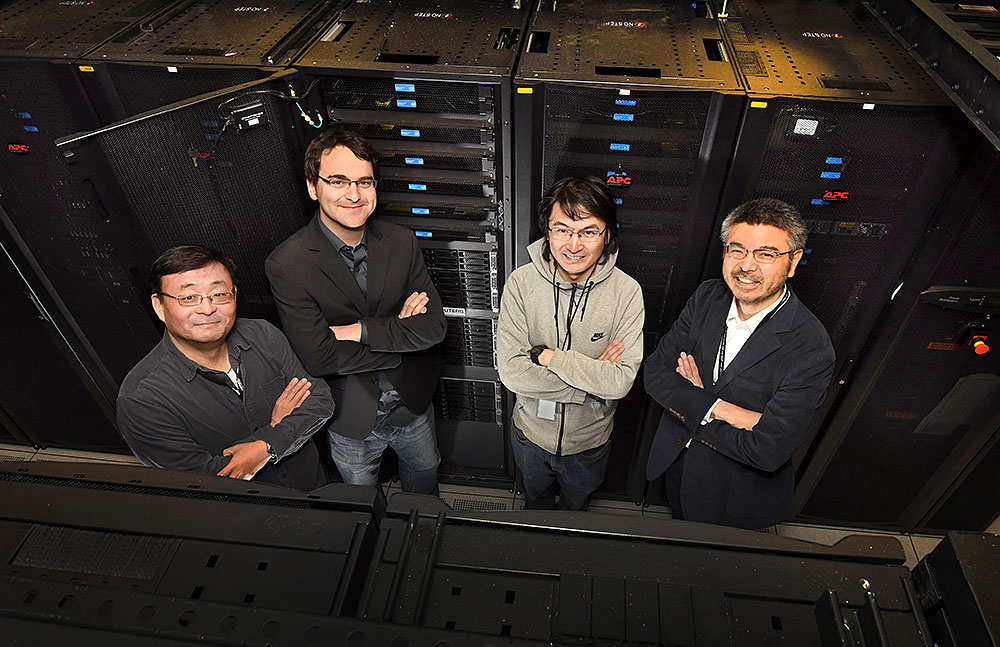 To model the interactions of muons with all known existing particles, these theoretical physicists rely on powerful supercomputers. The interactions with quarks and gluons, described by the notoriously difficult and numerically complex equations of Quantum Chromodynamics (QCD), are particularly thorny to work out.

“When Brookhaven scientists and collaborators started to think about QCD calculations for Muon g-2 about 20 years ago, I wasn’t able to imagine we could achieve the required precision. But here we are today very close to this goal, thanks to a lot of young talented physicists who have joined the collaboration since then,” Izubuchi said.

Meanwhile, the experimental physicists had prepared and packed their precious magnet for its epic land-and-sea journey to Fermilab. Among the challenges of the 2013 “Big Move” was getting the barge carrying the magnet out of Smith Point harbor.

“Vladimir Tishchenko and I were at Smith Point Marina where the tugboat pulling our barge loaded with our superconducting coil was getting ready to sail away,” Morse said. “Everyone was looking at their watches, so I asked the tugboat captain when they would go. He said there was a sandbar just outside the marina, and they had to go at dead high tide, otherwise they would be stuck.

“Finally, they went full throttle. When a small boat cut right in front of them, the captain didn't slow down at all, but gave a loud blast from the tugboat’s horn. They made it over the sandbar and were off to Illinois.”

In 2013 the Muon g-2 magnet was transported by land and sea from Brookhaven Lab to Fermilab. Here it is lifted by crane off of a specially outfitted trailer and loaded onto a barge at Smith Point Marina.

After years of Brookhaven and Fermilab staff and users working together to move and reassemble the magnet, when the commissioning began at Fermilab, there were a few glitches to fix. But with a dedicated team troubleshooting challenges as they came, “Our beautiful magnet was storing muons again,” Morse said.

“To me, the most important result of the Brookhaven Lab g-2 experiment was all the young people who became physicists doing this beautiful physics,” Morse said. Now the experiment is in the hands of these next-generation scientists.

Brookhaven physicist Vladimir (Volodya) Tishchenko, who is giving the colloquium on the new result at Brookhaven Lab later this week, is one of those physicists.

“I still remember the day I learned about the Muon g-2 experiment for the first time, in an undergraduate nuclear physics lecture—and learning about the scheme of the experiment from our textbook. I said to myself ‘Wow! How smart those people were to come up with such a clever idea!’” he recounted. 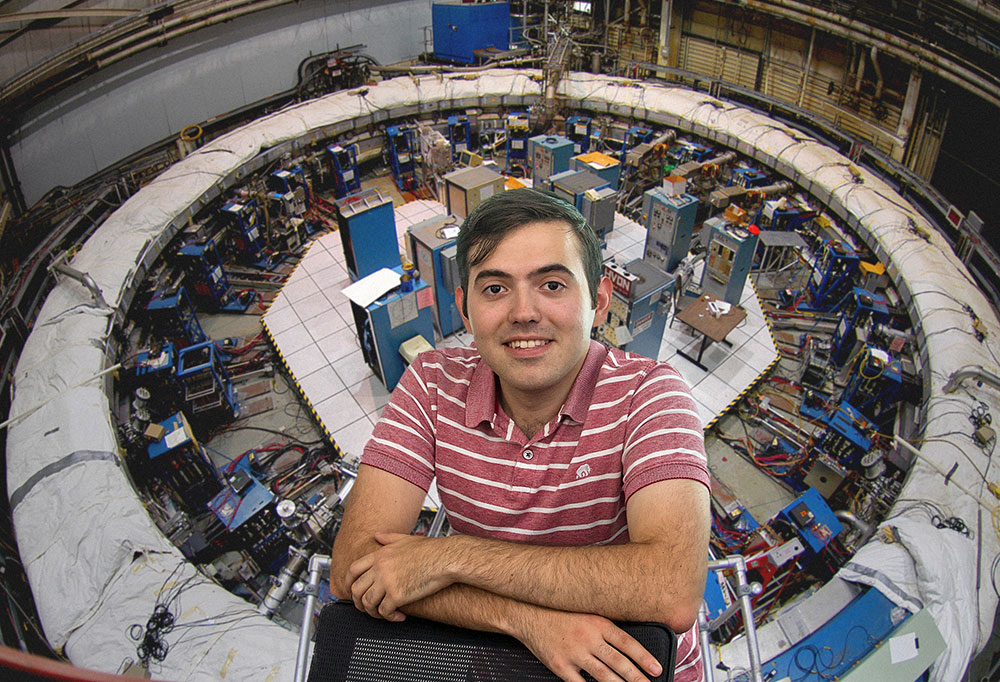 Brookhaven's Muon g-2 experiment provided educational opportunities for many young students, including Eric Metodiev, who participated in DOE's Science Undergraduate Laboratory Internships (SULI) program at Brookhaven Lab in 2013 (shown with the muon ring in the background).

At the time, he did not consider that he’d eventually join the collaboration. But he did, and actually moved to Brookhaven just as the muon magnet was making its departure. Meeting Morse was part of his motivation.

“I can learn a lot from him—and I will greatly benefit from the knowledge and the unique scientific environment in Brookhaven’s Physics Department!” Tishchenko recalled.

Knowing the discrepancy between theory and Brookhaven’s g-2 result was not very significant, Tishchenko was “a bit skeptical,” he said. Until now.

“The new result obtained at Fermilab is very exciting!” he said. “It tells us that the chance that the discrepancy between theory and experiment is due to mere statistical fluctuation is rather unlikely. It’s as if you flipped a coin and called it wrong 15 times in row (give it a try!).”

But there’s still a need to improve both the experiment and theory to claim a definitive discovery.

“On the experiment side it means collecting more data and finishing the analysis of already collected data,” he said. “Equally important (and where Brookhaven Lab takes the lead), we need to reduce the systematic uncertainties in the experiment, which means more computer simulations and deeper theoretical analysis.”

As Dmitri Denisov, Brookhaven’s Interim Associate Laboratory Director for Nuclear and Particle Physics, said, the new findings could be a window into something big. “The Standard Model describes the subatomic world with high precision, so finding tensions with its predictions indicates that we are on the verge of finding its limits to learn about elementary particles and their interactions at ever-smaller distances and higher energies. Such transformations have happened in the past, including the change from classical to quantum-world descriptions, opening new chapters in science and its applications. If this result indicates such a transformation is coming, we are eager to see what lies on the other side.”

Brookhaven Lab’s role in the Muon g-2 experiment and related theory work is funded by the DOE Office of Science (HEP).

Brookhaven National Laboratory delivers discovery science and transformative technology to power and secure the nation’s future. Primarily supported by DOE’s Office of Science, Brookhaven Lab is a multidisciplinary laboratory with seven Nobel Prize-winning discoveries, 37 R&D 100 Awards, and more than 70 years of pioneering research. Brookhaven is managed for the Office of Science by Brookhaven Science Associates, a partnership between Stony Brook University and Battelle. For more information, visit http://www.bnl.gov.  Follow @BrookhavenLab on Twitter or find us on Facebook.

The DOE Office of Science is the single largest supporter of basic research in the physical sciences in the United States and is working to address some of the most pressing challenges of our time. For more information, visit http://science.energy.gov.