Findings could lead to higher potential for biofuel crops 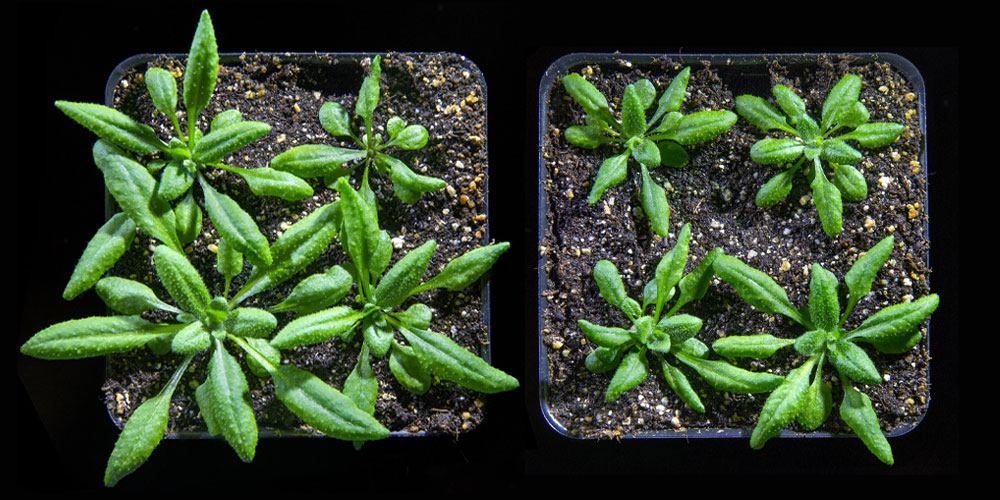 Brookhaven Lab studies using the fast-growing plant Arabidopsis (above) are helping to identify strategies for getting plants to produce and accumulate more oil. The goal is to transfer these approaches to energy crop plants such as energycane and Miscanthus.

CHAMPAIGN, Ill. — A team from the U.S. Department of Energy’s Brookhaven National Laboratory (BNL) has bred a plant that produces more oil by manipulating the availability of sugar for oil synthesis. The team, led by BNL’s John Shanklin, achieved these results in using leaves of the fast-growing plant Arabidopsis, to mimic stem cells of plants like energycane and Miscanthus.

The work is part of a University of Illinois-led biosystems design project called Renewable Oil Generated with Ultra-productive Energycane (ROGUE) to engineer two of the most productive American biomass crops—energycane and Miscanthus—to accumulate an abundant and sustainable supply of oil that can be used to produce biodiesel, biojet fuel, and bioproducts.

“The novel aspect of this work was to minimize sugar accumulation in a large cellular storage compartment called the vacuole,” said Sanket Anaokar, a research associate at BNL. “Our approach was to block sugar movement into the vacuole and maximize its export. When these genetic manipulations were made to plants that are also blocked in starch synthesis, the cell channeled the extra sugar into oil.” 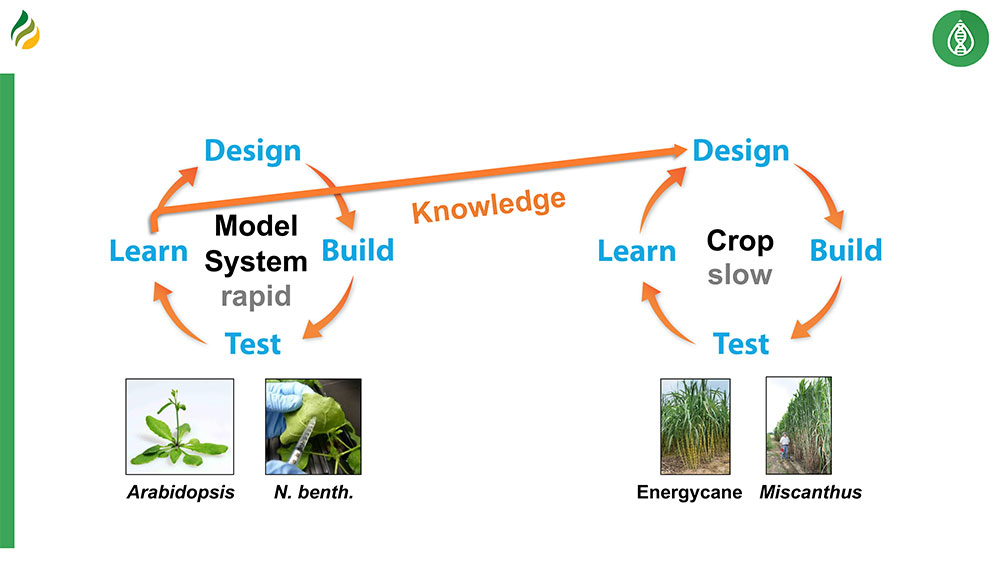 This scheme shows how research, like that conducted by Shanklin and his group, moves through the ROGUE research pipeline.

Anaokar went on to explain that an unexpected benefit of the approach the group took was that some of the remobilized sugar lessened the growth delays usually seen when the amount of exported sugar from the leaves and starches is decreased. The group will take what they’ve learned in their work with Arabidopsis and share it with other ROGUE researchers, speeding up the innovation cycle.

“It is far more difficult and time consuming to make multiple gene manipulations in energycane, whereas with Arabidopsis we can rapidly develop and test different genetic and molecular biology modifications to identify the most effective combinations,” said Shanklin, BNL Biology Department Chair and ROGUE researcher. “Once we validate an approach using our model system, we can move that knowledge over to fellow ROGUE researchers to deploy in the slower-growing biomass crop plants.”

Shanklin’s research is just one of the ways ROGUE is working to increase the availability of sustainable biofuels and reduce the use of petrochemicals.

“This proof of concept in the model plant Arabidopsis now shows us this is well worth moving into energycane and Miscanthus as a key step in making these viable sources of large amounts of oil for conversion into biodiesel and biojet fuel,” said ROGUE Director Stephen Long, Ikenberry Endowed University Chair of Crop Sciences and Plant Biology at Illinois’ Carl R. Woese Institute for Genomic Biology.

This study is published in Frontiers in Plant Science. ROGUE is supported by the Office of Biological and Environmental Research and the Division of Chemical Sciences and Geoscience and Biological Science divisions of the U.S. Department of Energy.