Brookhaven Lab physicist Nicole Lewis will present the latest results from the RHIC spin program in an invited talk at the 2021 Fall Meeting of the American Physical Society's Division of Nuclear Physics.

UPTON, NY—Where does the proton get its spin? This question has puzzled physicists ever since experiments in the 1980s revealed that a proton’s constituent quarks—the most fundamental building blocks of atomic nuclei—account for only about one-third of a proton’s spin. Collisions of spin-polarized protons at the Relativistic Heavy Ion Collider (RHIC), a U.S. Department of Energy Office of Science user facility for nuclear physics research at DOE’s Brookhaven National Laboratory, are helping to solve this mystery.

Nicole Lewis, a Brookhaven Lab physicist, will present the latest results from the RHIC spin program in an invited talk at the 2021 Fall Meeting of the American Physical Society’s Division of Nuclear Physics on October 12, 2021.

“RHIC is the first and only collider in the world that is able to run polarized proton beams,” Lewis said. “This means that spin-measurements can be done at higher collision energies compared to earlier fixed target experiments such as those that revealed the initial spin mystery. In collisions where the proton’s spin points in the direction of the beam (longitudinally polarized), we can study how much of the proton spin is due to the spins of its constituent quarks and gluons.” 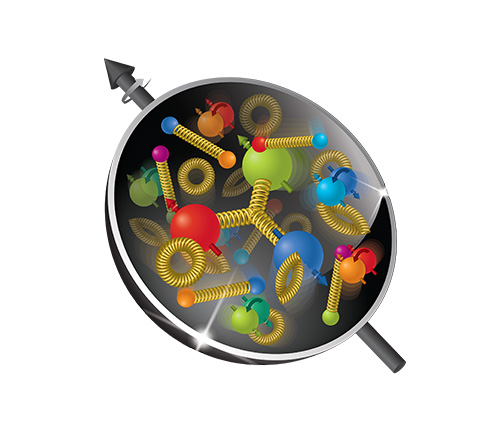 Studies have revealed a puzzle about how the inner building blocks of a proton, known as quarks (colored spheres) and gluons (yellow "springs"), contribute to proton spin. Experiments at the Relativistic Heavy Ion Collider at Brookhaven National Laboratory are helping to solve this mystery.

Lewis will present new measurements of quark and gluon contributions to proton spin based on data from RHIC’s STAR and PHENIX detectors. Gluons are the gluelike force-carrier particles that effectively “glue” quarks together inside protons and other hadrons. RHIC is the first facility that allows detailed studies of gluons’ spin contribution.

Lewis’ talk will also include new results from transversely polarized proton collisions—where proton spin is aligned in an “upward” direction. These collisions allow scientists to probe the three-dimensional internal structure of the proton.

In addition, Lewis will discuss future spin measurement opportunities using a recent “forward upgrade” to STAR and the upcoming sPHENIX experiment—a major transformation of PHENIX—which is scheduled to begin collecting data in 2023.

Nicole Lewis’ talk is part of an invited session at the American Physical Society’s Fall 2021 Division of Nuclear Physics meeting.

“Spin physics at BNL and JLab, new results on J/ψ and the road to the EIC,” chaired by Brookhaven Lab physicist Elke-Caroline Aschenauer, will feature three invited talks:

Experimental equipment of the EIC: Tanja Horn (Catholic University of America) will be presenting the proto-collaboration detector proposals for the future Electron-Ion Collider, a next-generation nuclear physics research facility to be built at Brookhaven Lab in partnership with scientists from JLab and other collaborators around the world.

The aim of this session is to present a coherent picture from JLab's 12 GeV science related to proton spin and mass and Brookhaven's RHIC spin program to the science at the future Electron-Ion Collider (EIC).