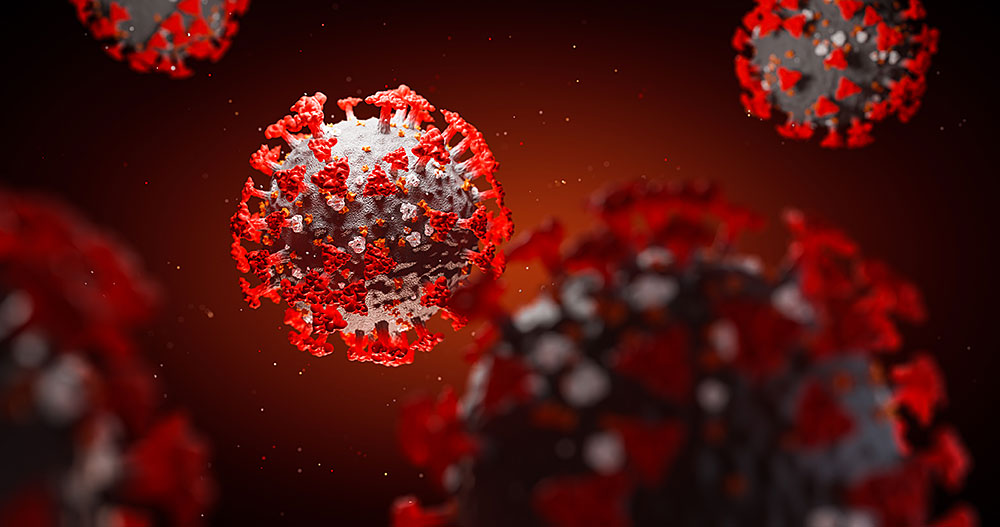 UPTON, NY–A new model that tracks how expelled respiratory particles evolve suggests that drier wintertime indoor air allows virus particles in those exhaled droplets to remain active longer than is possible in moister summertime air. This finding may help explain wintertime increases in transmission of respiratory viruses like flu and SARS-CoV-2, the virus that causes COVID-19.

“This research is relevant to understanding COVID-19 and other airborne diseases that are really common, like the flu, as well as future novel viruses,” said Alison Robey, the lead author who conducted this research as an intern working with Laura Fierce, an atmospheric scientist formerly with the U.S. Department of Energy’s Brookhaven National Laboratory, now at DOE’s Pacific Northwest National Laboratory. “The ability to tease apart the mechanisms causing seasonality can help us figure out which safety controls—like distancing, wearing masks, and increasing/improving ventilation—are needed to reduce transmission risk in different situations.”

The study—published in a special issue of the journal International Communications on Heat and Mass Transfer focused on airborne pathogen transmission—was motivated by the question of whether the COVID-19 virus would follow similar seasonal trends as flu.

Like influenza, the COVID-19 virus is surrounded by an outer envelope and carried in exhaled respiratory droplets when people speak, cough, or sneeze. Scientists have suspected that seasonal variation in case rates is driven, at least in part, by the effects of relative humidity on the respiratory droplets. But the mechanism for this effect is not well understood.

One hypothesis: Drier air in winter causes evaporation of moisture from respiratory droplets, causing them to shrink and linger longer in the air. These virus-laden droplets could therefore travel farther to reach susceptible people. A second possible mechanism: The evaporation of moisture from respiratory droplets somehow causes the viruses within to remain active and infectious longer.

To sort out this question, the Brookhaven team developed a computational model to track how indoor relative humidity typical of winter (dry) and summer (less dry) affected the size and transport of the plume of particles expelled when an infectious person speaks.

The researchers found that, in low humidity conditions compared to higher humidity, only a trivial number of particles experienced significant shrinkage and increased airborne travel, with little effect on transmission risk. But their model also found that the increase in wintertime transmission may be driven more by the effect of humidity on how long viruses within respiratory particles remain active and infectious.

Previous laboratory measurements suggest that when the relative humidity is low, SARS-CoV-2, like other coronaviruses, decays more slowly. The hypothesis is related to other substances dissolved within the watery respiratory droplets. These dissolved substances are thought to react with the viruses and deactivate them. If the humidity drops enough, the solutes within expelled droplets move to the surface, where they are less likely to deactivate the virus.

At distances closer than six feet, the changes in relative humidity had no significant effect on exposure. That’s because at close range, viral loads in the respiratory droplets are universally high and there isn’t enough time for the solute-driven reactions that inactivate the viruses to take place, said Fierce.

Scientists at Brookhaven have longstanding expertise in modeling aerosols for studies of clouds and climate. Their ability to track and model the characteristics of tiny particles emitted into Earth’s atmosphere by industrial or natural sources can be applied to modeling how respiratory aerosols spread diseases like COVID-19.

“When I started developing this model of respiratory aerosol and droplets, I was able to hit the ground running because DOE’s Atmospheric System Research (ASR) program funding had previously allowed me to develop a similar model for atmospheric aerosols,” Fierce said.

A paper describing the new model of respiratory aerosols and droplets developed by Fierce with help from Robey and Cathrine Hamilton, another student intern at Brookhaven, was published this past summer in the journal Indoor Air. That model and the new study includes research conducted as part of the National Virtual Biotechnology Laboratory (NVBL), a consortium formed in 2020 to combine core capabilities across the DOE National Laboratories to respond to the COVID-19 threat.

The model builds on the work of a relatively small community of researchers who have been working to understand the processes that drive airborne transmission of respiratory viruses even before the COVID-19 pandemic, Fierce said. Previously collected data included measurements of the size distribution of respiratory particles and measurements of the viral load in particles of different sizes.

“We used all of this prior information and combined it into our model to help us understand which of these aerosol processes are the most important,” Fierce said. “Understanding the processes that govern airborne transmission is important for prioritizing mitigation strategies.”

Robey and Fierce used the model to perform thousands of simulations with SARS-CoV-2 and compared virus particles inhaled by a susceptible person during scenarios with indoor relative humidity typical for the summer (65%) and winter (40%). From these data they could estimate the number of active virus particles a susceptible person would inhale at different distances from an infected person.

The simulations showed that in poorly ventilated spaces and encounters lasting four hours, lowering the relative humidity from 65% to 40% led to a 20% increase in the median exposure to active virus particles when the susceptible individual is two meters (or more) from the infectious individual. At closer distances, exposure to active virus particles was not affected by differences in humidity.

Fierce said that collaboration among NBVL scientists was key to developing the model and deciding which questions to tackle to better understand COVID-19 transmission. Contributions from interns were also essential to this research project. Robey and Hamilton were both participants in the Department of Energy’s Science Undergraduate Laboratory Internships (SULI) program at Brookhaven. For the current study on relative humidity, Robey helped design model scenarios, selected the model for computing the risk of infection for a given pathogen dose, and led the writing of the paper.

This research was supported by the DOE Office of Science (BER) through NVBL, consortium of DOE national laboratories focused on the response to COVID-19, with funding provided by the Coronavirus CARES Act. The aerosol model framework was originally developed for simulation of atmospheric aerosols under DOE’s Atmospheric System Research program. Student participation in this project was supported by the Office of Workforce Development for Teachers and Scientists (WDTS), in DOE’s Office of Science, under the SULI program , and SURP, a program run by Brookhaven Lab’s Office of Educational Programs with funding from Brookhaven Science Associates—a partnership between Battelle and The Research Foundation for the State University of New York on behalf of Stony Brook University—which manages Brookhaven Lab.