The following news release was issued by CERN, the European Organization for Nuclear Research, home to the Large Hadron Collider (LHC). The U.S. Department of Energy's Brookhaven National Laboratory serves as the U.S. host laboratory for the ATLAS experiment and plays multiple roles in this international collaboration, from construction, project management, and operations to data storage, distribution, and analysis. Brookhaven scientists have made major contributions to upgrades for the ATLAS experiment that will allow scientists to capture and analyze the most significant details from vastly larger data sets; and increases in computing capacity devoted to analyzing and sharing that data with scientists around the world.

“It is great to see LHC ‘back’ after extended shutdown with major upgrades, including upgrades provided by Brookhaven Lab,” said Dmitri Denisov, deputy associate laboratory director for High Energy Physics at Brookhaven. “Fantastic science will come from the upcoming run!”

Beams of protons are again circulating around the collider's 27-kilometre ring, marking the end of a multiple-year hiatus for upgrade work 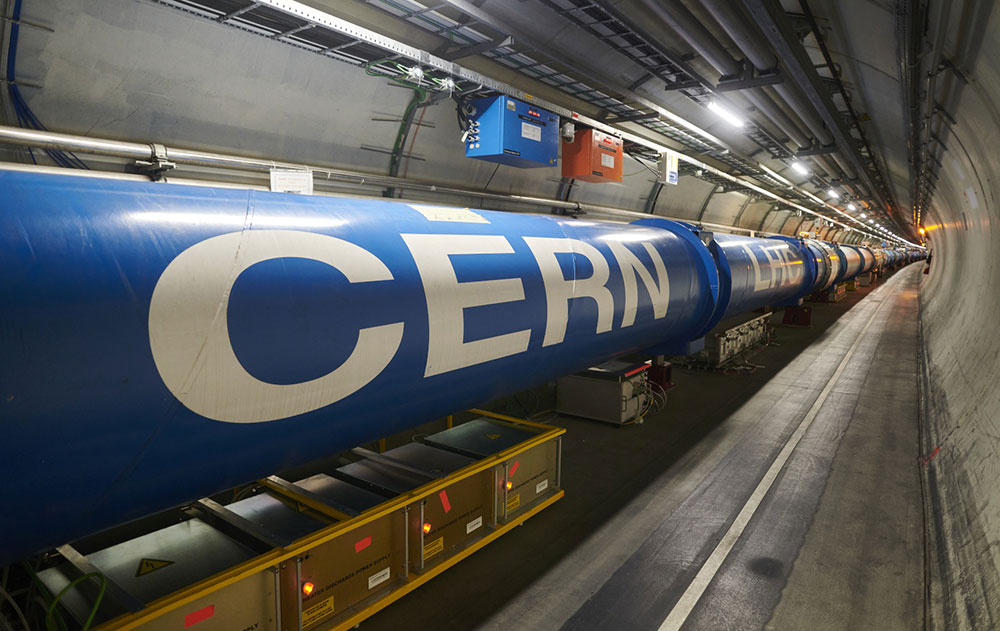 A chain of LHC dipole magnets inside the tunnel at point 1 (ATLAS) towards the end of Long Shutdown 2 (LS2).When the Large Hadron Collider (LHC) begins Run 3 next year, operators aim to increase the energy of the proton beams to an unprecedented 6.8 TeV. Credit: Hertzog, Samuel Joseph: CERN

The world’s largest and most powerful particle accelerator has restarted after a break of more than three years for maintenance, consolidation and upgrade work. Today, 22 April, at 12:16 CEST, two beams of protons circulated in opposite directions around the Large Hadron Collider’s 27-kilometre ring at their injection energy of 450 billion electronvolts (450 GeV).

“These beams circulated at injection energy and contained a relatively small number of protons. High-intensity, high-energy collisions are a couple of months away,” says the Head of CERN’s Beams department, Rhodri Jones. “But first beams represent the successful restart of the accelerator after all the hard work of the long shutdown.”

“The machines and facilities underwent major upgrades during the second long shutdown of CERN’s accelerator complex,” says CERN’s Director for Accelerators and Technology, Mike Lamont. “The LHC itself has undergone an extensive consolidation programme and will now operate at an even higher energy and, thanks to major improvements in the injector complex, it will deliver significantly more data to the upgraded LHC experiments.”

Pilot beams circulated in the LHC for a brief period in October 2021. However, the beams that circulated today mark not only the end of the second long shutdown for the LHC but also the beginning of preparations for four years of physics-data taking, which is expected to start this summer.

Until then, LHC experts will work around the clock to progressively recommission the machine and safely ramp up the energy and intensity of the beams before delivering collisions to the experiments at a record energy of 13.6 trillion electronvolts (13.6 TeV).

This third run of the LHC, called Run 3, will see the machine’s experiments collecting data from collisions not only at a record energy but also in unparalleled numbers. The ATLAS and CMS experiments can each expect to receive more collisions during this physics run than in the two previous physics runs combined, while LHCb, which underwent a complete revamp during the shutdown, can hope to see its collision count increase by a factor of three. Meanwhile, ALICE, a specialised detector for studying heavy-ion collisions, can expect a fifty times increase in the total number of recorded ion collisions, thanks to the recent completion of a major upgrade.

The unprecedented number of collisions will allow international teams of physicists at CERN and across the world to study the Higgs boson in great detail and put the Standard Model of particle physics and its various extensions to the most stringent tests yet.

Other things to look forward to in Run 3 include the operation of two new experiments, FASER and SND@LHC, designed to look for physics beyond the Standard Model; special proton–helium collisions to measure how often the antimatter counterparts of protons are produced in these collisions; and collisions involving oxygen ions that will improve physicists’ knowledge of cosmic-ray physics and the quark–gluon plasma, a state of matter that existed shortly after the Big Bang.