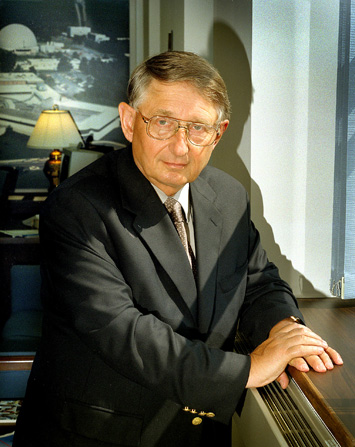 Peter Paul, a physicist and a former interim director of Brookhaven National Laboratory, died on March 11. He was 84.

Paul was a past Deputy Director for Science & Technology at Brookhaven and, for nearly half a century, a member of the Department of Physics and Astronomy at Stony Brook University.

“Peter Paul was a distinguished nuclear scientist and a steadfast supporter of Stony Brook University and Brookhaven National Lab,” said Brookhaven Lab Director Doon Gibbs. “As Brookhaven Science Associates’ first Deputy Director for Science & Technology, he made many important contributions to the Lab that persist to this day.”

Paul’s work to increase the number of post docs at Brookhaven was particularly impactful, Gibbs noted.

“He doubled them to more than 150 at one point with enormous impact on the Lab,” Gibbs said. “He was remarkably energetic and enthusiastic about science, as well as a mentor and a friend.”

Paul’s enthusiasm for science, and the impact he had on people, was also noted by Rich Reeder, Associate Vice President for Brookhaven Affairs at Stony Brook University.

“It was exciting to work with him. He was like a perpetual motion machine, wonderful at working with people and making connections,” Reeder said. “He was instrumental in bringing researchers from Stony Brook University to the Lab and making the Lab aware of the resources we had at the university.”

After he received a Ph.D. in experimental nuclear physics from the University of Freiburg in 1959 and post-doctoral work at Stanford, Paul joined the Stony Brook Department of Physics in 1967. He became a distinguished service professor in 1992 and he served as department chair from 1986 to 1990 and 1996 to 1998.

Paul became a member of the Nuclear Science Advisory Committee in 1980 and, as chair, led the development of the 1998 Nuclear Science Long Range Plan, which laid the groundwork that led to the construction of the Relativistic Heavy Ion Collider.

In 1997, Paul had a key role in capturing the management contract for Brookhaven Laboratory, in partnership with Battelle. In 1998, he was appointed Deputy Director for Science & Technology at Brookhaven, and then stepped in as Interim Lab Director when John Marburger was appointed President George W. Bush’s scientific advisor in 2001. Paul held that role until 2003, when he returned to his regular role at Stony Brook.

Paul also played critical roles that would lead to the creation of the Center for Functional Nanomaterials and the National Synchrotron Light Source II, both U.S. Department of Energy User Facilities at Brookhaven Lab. And he served as head of Stony Brook’s Nuclear Structure Laboratory, where he and Gene Sprouse designed and built one of the first superconducting linear accelerators.

Paul was Associate Vice President for Brookhaven Affairs at Stony Brook from 2011 to 2015. In that role, he significantly expanded Stony Brook’s interactions and collaborations with the Lab. He facilitated numerous joint appointments between Stony Brook and Brookhaven, and created opportunities for graduate and undergraduate student participation in Lab activities. More recently, he had a central role in Brookhaven Science Associates (BSA) successful re-competition for the contract to manage Brookhaven Lab for DOE. BSA is a limited-liability company founded by the Research Foundation for the State University of New York on behalf of Stony Brook University and Battelle.

It was during the re-compete that Paul and Reeder worked together most closely.

“In many ways he served as a mentor for me because I overlapped with him for two years as we worked on the re-compete,” Reeder said. “I still relied on him extensively for his knowledge and insight about the Lab. He was always thinking about these two institutions and the relationship.”

Paul's research interests were in nuclear physics, including nuclear structure, heavy ion physics, neutrino physics, and particle accelerators. He authored or co-authored more than 180 articles in refereed journals and books, and served in editorial roles for several high-impact international journals in nuclear and particle physics. He was the recipient of numerous awards, including a Sloan Foundation fellowship and an Alexander von Humboldt Foundation senior scientist award.

He is survived by his wife Aniko, three children, and eight grandchildren.