Out of the Classroom and Into the Laboratory 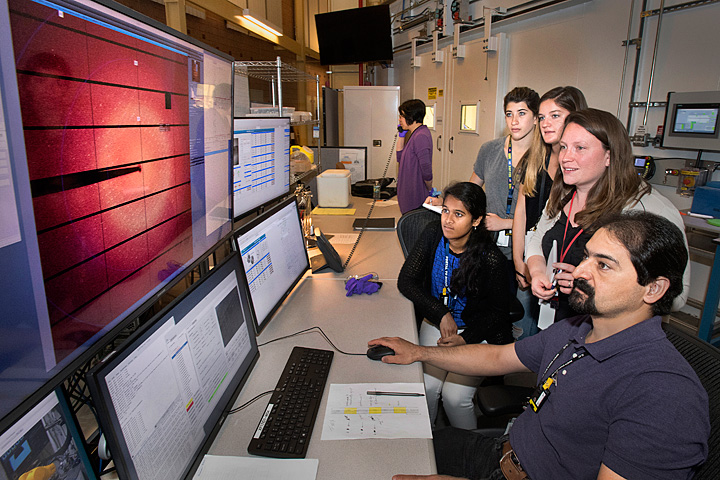 NSLS-II beamline scientist Babak Andi explains the significance of this colorful scattering image to the students and teachers.

From June 26 to June 30, students and teachers from several Long Island school districts came to the U.S. Department of Energy’s (DOE) Brookhaven National Laboratory for an exciting week of summer science at the National Synchrotron Light Source II (NSLS-II), a DOE Office of Science User Facility.  The weeklong workshop organized by Brookhaven’s Office of Educational Programs (OEP) and NSLS-II scientists offered 18 participants an opportunity to conduct research on a crystallography beamline using the same kinds of tools as Nobel Prize winners McKinnon, Ramikrishnan, and Steitz, who performed their award-winning work at Brookhaven’s original NSLS.

Teams of teachers and students from six different school districts attended the workshop, which included several lectures given by scientists from NSLS-II, partner facilities, and universities to highlight the wide range of science possible at NSLS-II. While the lectures covered many topics, the focus of this year's workshop was hands-on protein crystallography, a technique that uses x-rays to uncover the atomic-level structures of large biological molecules.

“The students and teachers conducted experiments at beamlines 17-ID-1 and 17-ID-2, used the facility’s laboratories, and analyzed their data using our tools. They took part in the whole research process,” said Vivian Stojanoff, a physicist at NSLS-II.

The teachers and students started their research by crystallizing and freezing the proteins they wanted to study. Next, they placed their crystals in the path of a bright x-ray beam to study how light bounces off the molecules within the crystal to create a scattering pattern in the detector. Using advanced software, the teachers and students then learned how to analyze these patterns and how to re-construct the three-dimensional protein structure. 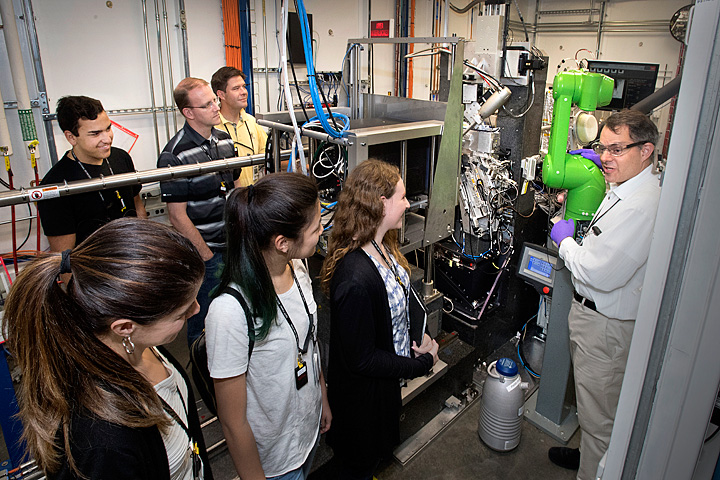 Alexei Soares, biophysicist in the Life Science and Biomedical Technology Research Resource, demonstrates how the bright green robot arm at beamline 17-ID-1 places samples into the x-ray beam and then returns them to a nitrogen-cooled refrigerator for safe storage.

Studying the structure of proteins on a molecular level using synchrotrons is often a key step to understand their biological functions. This is especially true in drug design, where researchers need to fully comprehend the inner working of proteins to combat various illnesses.

“It was an amazing week,” said Francesca Paduano, a student at Hauppauge High School. “We were actually part of real research and we used the same instruments, methods, and software as the scientists do. I learned so many new things. The scientists were incredibly generous with their time and were eager to explain everything.”

Organizers and attendees agreed that mentoring was the key to success for this workshop and to achieve its long-term goals: motivating students to pursue careers in science research, providing professional development for teachers, and helping students and teachers become autonomous users of NSLS-II with their own scientific questions.

“The workshop is not designed to be a one-time opportunity for the schools,” said Aleida Perez, a scientist with OEP. “It is the start of a partnership and collaboration between us and the schools. We want to educate the teachers and students on how they can be involved in modern research.”

The idea, Perez explained, is to help the teams learn the capabilities of the light source, and introduce them to communication skills for writing their own scientific proposals, forming new collaborations, and presenting their findings in a scientific fashion. “We like to encourage collaboration between different school districts for future projects,” she said. 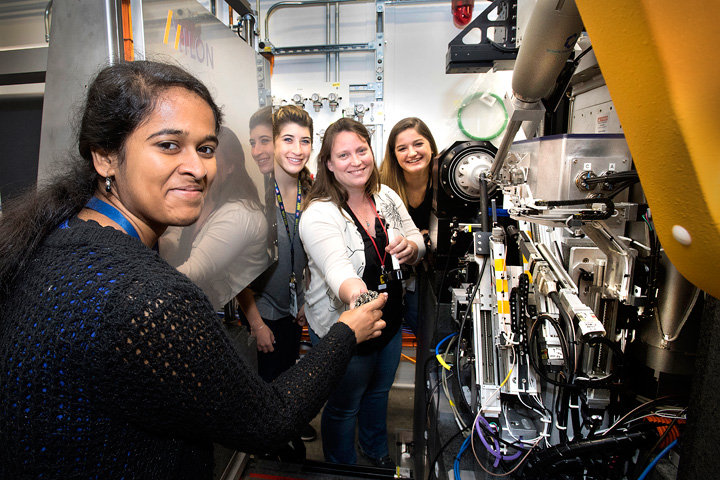 At the beginning of the workshop, the students and teachers familiarized themselves with the beamline equipment. Here they are inspecting one the sample holders that will keep their crystals safe and cold before the experiments start.

An important objective noted by Ken White, OEP manager, is to “leverage the time of the scientist to be able to involve more students in research at the Lab. We are achieving this by training teachers from regional schools to become skilled in collaborating with scientists at facilities like NSLS-II. They, in turn, become a conduit to students for many years to come.”

Christopher Picchiello, a student from Connetquot High School, said, “Seeing how all the different disciplines of science connect in just one project is really inspiring. At the beginning, it was a little overwhelming, but now everything makes sense. We really want continue our research projects with the other schools.”

Most teachers who brought their students to this program had already participated in a similar workshop for teachers, which introduced them to these ideas and laid the foundation for the student program. Last year’s workshop included a broader spectrum of scientific techniques and resulted in three collaborative proposals from the attending teachers.

“This year’s workshop is special to me because I could bring two of my students and learn with them, instead coming on my own and only reporting my experience in the classroom,” said Robert Bolen, who teaches at Eastport South Manor Junior-Senior High School. “This time, when we return to our school, they will co-teach [the rest of the students] with me, which will also be an amazing experience for them.”

Many of the participants in this year’s workshop hope to continue their association with the NSLS-II science community.