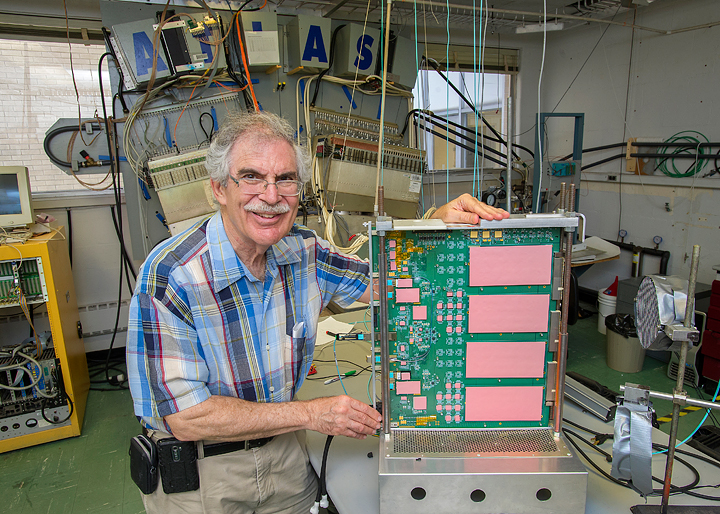 Emeritus status was granted to Howard Gordon of Brookhaven Lab's Physics Department, effective Sept. 30. The emeritus position at Brookhaven Lab was established to recognize retired scientists who have made particularly noteworthy contributions to the Laboratory's reputation as a world-class scientific institution.

During Gordon's 47-year career—which included work with bubble chambers, the Alternating Gradient Synchrotron, ISABELLE, the D0 experiment at Fermilab, the Superconducting Super Collider, and ATLAS collaboration—he became a leader in hadron collider experiments and well-known in the international high-energy physics community. Gordon is an author on approximately 870 publications with more than 89,000 citations—including the ATLAS collaboration's discovery of the long-sought Higgs boson in 2012 and the discovery of the top quark in 1995 with the D0 experiment.

Gordon's insights to physics, technical knowledge of particle detectors, and dedication to the ATLAS experiment earned him deep respect from his colleagues and a U.S. ATLAS lifetime achievement award. He was elected ATLAS collaboration board chair in 2012, and he served as chair and deputy chair from 2013 to 2016. The 2012 discovery of the Higgs boson at a mass of approximately 125 giga-electron volts was definitive proof that the "Higgs mechanism" explains electroweak symmetry breaking and part of a quest Gordon started in 1970 and made profound contributions in resolving.

Gordon is a fellow of the American Association for the Advancement of Science and the American Physical Society (APS), and he was elected chair of APS' Division of Particles and Fields. He served on many Department of Energy and National Science Foundation review committees and was a member of the national High Energy Physics Advisory Panel.

"Of note are your original contributions to the D0 experiment at Fermilab, and your key role in leading the U.S. ATLAS effort, first the construction project, then the operations program. You served as the group leader for the Omega group, Associate Chair and Deputy Chair in the Physics Department, and for many years, shepherded BNL's high energy physics program…Congratulations and thank you for your contributions to Brookhaven National Laboratory."

Gordon said, "The success in my career comes from the help and support of individuals and groups all across Brookhaven Lab. I look forward to spending more time with my family and having time to follow more closely the exciting results, which will continue to come from ATLAS."