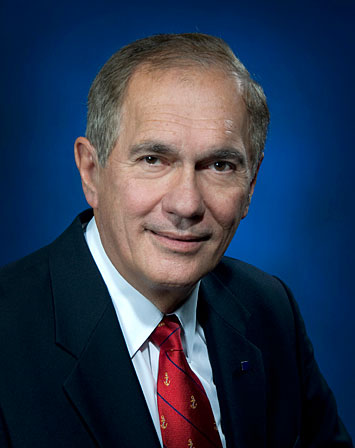 Emeritus status was granted to Robert Bari of Brookhaven Lab's Nuclear Science & Technology Department, effective Oct. 17—the day he retired. The emeritus position at Brookhaven Lab was established to recognize retired scientists who have made particularly noteworthy contributions to the Laboratory's reputation as a world-class scientific institution.

Bari has been recognized for many contributions to nuclear power reactor safety, security, and nonproliferation during more than 40 years of nuclear energy research. He specializes in probabilistic risk assessment—using mathematical methods to estimate the likelihood of hazards occurring and their consequences.

After earning a bachelor's degree from Rutgers University and a Ph.D. from Brandeis University, both in physics, Bari joined the MIT Lincoln Laboratory for a two-year assignment in the solid-state theory group. He then joined Brookhaven Lab as an assistant physicist in the Physics Department in 1971. He was a visiting assistant professor of physics at Stony Brook University during the 1973–74 academic year and he returned to Brookhaven in 1974 as a physicist in the Department of Applied Science.

Bari was named associate chair and senior physicist of the Department of Nuclear Energy in 1982 and was awarded tenure in 1984. He became deputy department chair in 1988 and then chair of the Nuclear Energy Department in 1995. Bari served as interim associate laboratory director for applied programs at the Lab for several months in 1999 before returning to his role as department chair. He then returned to his role as a senior physicist in 2000, and in 2004, was presented with a Science & Technology Award—among the highest accolades given by Brookhaven to its employees for distinguished contributions to the Lab's mission. In 2003, the American Nuclear Society presented Bari with Theo J. (“Tommy”) Thompson Award for his research contributions in nuclear safety. He retired from the Nuclear Science & Technology Department in 2017.

Bari has held adjunct positions at Stony Brook University, the Polytechnic Institute of New York, and Manhattan College. He has co-supervised doctoral students at Stony Brook, the Massachusetts Institute of Technology, and the University of Michigan, and also chaired several international meetings and workshops.

Bari served for 15 years as co-chairman of the working group on proliferation resistance and physical protection of the Generation IV International Forum, which carries out research and development to establish feasibility and performance capabilities of a new generation of nuclear energy systems. He has served on the board of directors of the American Nuclear Society and as president of the International Association for Probabilistic Safety Assessment and Management. He is a fellow of the American Nuclear Society and American Physical Society, and has been a member of the National Academy of Sciences committee for lessons learned from the Fukushima Nuclear Accident for Improving Safety and Security of the U.S. Nuclear Plants.

"You are recognized by peers around the world for your contributions to nuclear power reactor safety, security, and proliferation resistance—including your contributions to probabilistic risk assessment. Your recent work as a member of the U.S. Academies Committee on Lessons Learned from the Fukushima nuclear accident has been extremely important."

Bari said, "I am immensely proud of my long-term association with Brookhaven. It has indeed been a privilege to have worked with many outstanding scientists and engineers over the years. The Laboratory has provided a very enabling atmosphere to conduct the work that I and my colleagues have done to contribute to meeting many national needs and, at the same time, to advance the frontiers of knowledge in the applied areas. In my new emeritus position I plan to continue to be engaged in addressing new challenges in these areas."