Ready, set…DIG! U.S. Senators Charles Schumer and Kirsten Gillibrand, and Congressman Tim Bishop joined with representatives from Brookhaven National Lab, the U.S. Department of Energy (DOE), Battelle, and Stony Brook University (SBU) on Monday, June 15, as they put shovels to the ground to commemorate the start of construction for the National Synchrotron Light Source II (NSLS-II) at Brookhaven Lab.

These shovels were among the first to “dig” at the NSLS-II site, where approximately 1,000 jobs will be created in the coming years. The NSLS-II project received $150 million earlier this year through the American Recovery and Reinvestment Act to speed up the construction of the unprecedented, state-of-the-art research facility while creating jobs and stimulating the local economy.

With construction underway, the NSLS-II facility is scheduled to start operating in 2015. It will provide researchers with extremely bright beams of x-ray, ultraviolet, and infrared light to study ultra-small structures and properties of a variety of materials and biological samples. These efforts will yield advances in energy, environmental science, and medicine among many other fields.

Brookhaven Lab Director Sam Aronson was the first to welcome guests and the more than 1,000 Lab employees and students who gathered to celebrate under the large tent alongside the empty field where NSLS-II will be built. He expressed gratitude for the many essential contributions that had moved the project toward realization and explained that building the world-leading NSLS-II facility in New York State is an investment in developing new cutting-edge skills and expertise for the state’s workforce.

“Brookhaven is bringing together scientists and engineers from New York State research institutions and industries to identify scientific challenges associated with the new machine, develop solutions with them and then transfer that technology to New York State industries,” Aronson said. “This will give local companies a competitive edge in supplying this kind of advanced equipment — not only to NSLS-II but to other large-scale facilities around the world. I expect this to be a growth industry.”

Next, Associate Lab Director for Light Sources and NSLS-II Project Director Steve Dierker took the podium. “It has taken many years of careful planning and hard work to get to today’s very significant milestone and it is indeed a very sweet moment for us all,” he said. “There’s a huge sense of excitement within the synchrotron community for this new state-of-the-art machine. Although there’s a long way to go, the project is currently within budget and on time.”

Following Dierker, U.S. Congressman Timothy Bishop addressed the crowd and praised the NSLS-II project not only for its scientific goals but also for the new jobs it will create. “This facility is about lots of things, but right now it’s about putting people to work,” said Bishop. “This is what Long Island needs, this is what our nation needs, and we are going to deliver it right here at Brookhaven.”

Bishop then introduced U.S. Senator Charles Schumer, who emphasized the scientific advances that will be possible at the facility, the jobs that will be created, and the effects that more than 3,000 users will have on both the local and national economies. “Deep, hard-to-understand science makes every person’s life better,” said Schumer. “The ripples outward of these shovels in the ground today are untold — at the highest, most imaginative, ethereal levels, and down on the ground in terms of good-paying jobs for all of us.”

Battelle’s Executive Vice President for Global Lab Operations Ron Townsend spoke next at the celebration. Battelle, along with SBU and the Research Foundation of the State University of New York, are partners in Brookhaven Science Associates, which manages Brookhaven Lab. 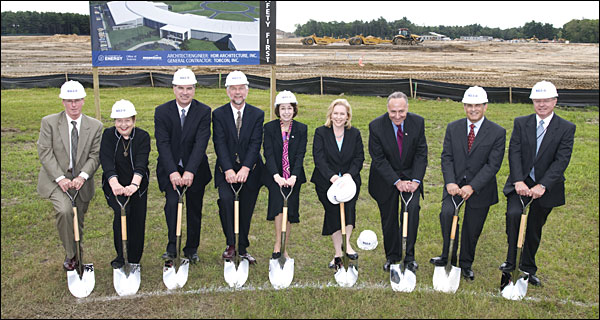 “The fundamental research capabilities of NSLS-II will lead to extraordinary discoveries where experts from around the world will have access to the means for innovation…the key to translate discovery to impact,” said Townsend, linking future research at NSLS-II to developing cures for diseases and enabling and powering clean, renewable energy sources.

“The impact of NSLS-II on American research is incalculable,” said Shirley Strum Kenny, president of Brookhaven Science Associates partner SBU. “Collaboration is the name of the game in the 21st century and nowhere is that collaboration facilitated better than at Brookhaven.”

DOE’s Deputy Director for Science Programs Patricia Dehmer, who has guided the NSLS-II project at DOE since its inception, emphasized the collaboration between NSLS-II and Brookhaven Lab’s Center for Functional Nanomaterials (CFN) in a “race to save the world,” referring to NSLS-II as a microscope and the CFN as the molecular design factory.

“Until NSLS-II announced its technical specifications, no other light source in the world ventured into this territory. This is key to studying the ultra-small… this will help us understand how nature really works,” said Dehmer, adding that she enjoys monitoring the facility’s progress via the Web cam that overlooks the construction site.

The ovation following Dehmer’s remarks made clear the gratitude of the Brookhaven audience for her long-time support of the NSLS-II project.

Finally, U.S. Senator Kirsten Gillibrand spotlighted the educational programs and opportunities that NSLS-II will make possible. In addition to the programs at Brookhaven Lab today, they will enable students “to join the ranks of researchers helping America address our so many scientific challenges.”

“Just like the investments that we’re making right here on Long Island today, these investments are a down payment for America’s future,” said Gillibrand.

In honor of the start of construction for NSLS-II, the audience was entertained by Longwood High School’s Jazz Ensemble and a special interpretive dance titled Time and Space for Celebration, which featured members of the Center for Dance, Movement and Somatic Learning at SBU. A picnic lunch followed.

At the conclusion of the ceremony, Brookhaven Lab’s Dierker announced that view holes would be placed in the dust fence surrounding the construction site perimeter. But if you are unable to make it to the site, see the facility’s progress online, just as Pat Dehmer of DOE does: http://www.bnl.gov/nsls2/webcam/.

For the latest information on NSLS-II, visit http://www.bnl.gov/nsls2/.

Watch the full-length video of the event. (Real Player required.)