Science Bowl Proves to be a Catalyst for STEM Careers 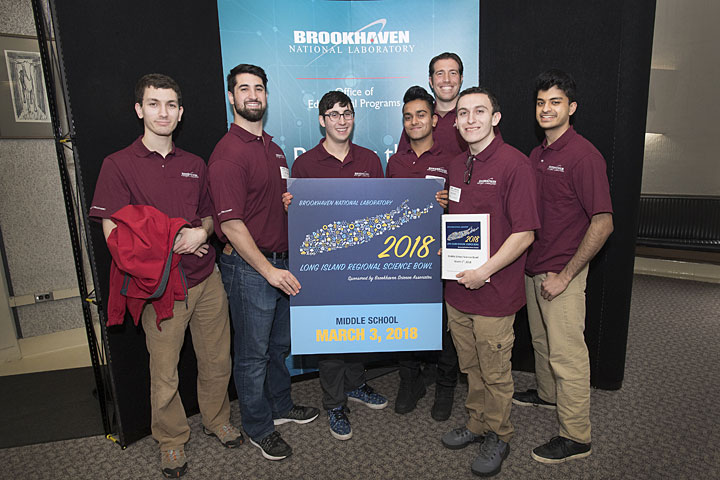 Farmingdale High School teacher Pete Macchia, (back row, third from right), with some of his former students who competed in previous regional science bowls at Brookhaven Lab. These students came back to the Lab as science bowl volunteers and shared their enthusiasm about the STEM career paths they had chosen. From left to right are: Elijah Mas, Trevor Corrao, Michael Waldman, Suraj Muralidharan, Jake Chammas, and Nakul Gupta.

Each year, the U.S. Department of Energy (DOE) hosts the National Science Bowl®—one of the largest science competitions in the nation. Since 1991, more than 290,000 students have participated in the competition, motivating them to excel in science and mathematics.

At DOE’s Brookhaven National Laboratory, hundreds of students have participated in regional science bowls. The Lab’s Office of Educational Programs (OEP) organizes the event, works out logistics with local schools, and reviews and implements the strict contest rules. But ask anyone who works in OEP and they will say that none of this would happen without the volunteers.

“We run several contests a year at the Lab,” said Kenneth White, manager of OEP. “From DOE’s National Science Bowl to bridge building contests and science fairs, we wouldn’t be able to do such a great job without the support from our volunteers. They are truly a driving force and perfect mentors for our younger generation who may be on the road to careers in STEM (science, technology, engineering, and math).”

This year, several former Farmingdale High School students who competed in previous regional science bowls at Brookhaven came back as volunteers. They were excited to share their enthusiasm about the STEM career paths they had chosen.

When White heard about the Farmingdale students volunteering for the competition, he wanted to learn where they ended up. “I could not have been happier,” said White.  “The conversations I had with the past participants were everything I hoped they would be. The stories these students shared validated that the many programs and competitions run by the Lab and DOE have made an impact on students' career choices.  It was a testament to the importance of these programs for building our domestic STEM workforce.”

Pete Macchia, a science teacher at Farmingdale High School who is a regular volunteer at Brookhaven Lab’s educational contests, sent out an email to some of his previous students, asking if they might be willing to volunteer at this year’s science bowl. All six responded yes!  These previous students had participated in science bowl when they were students of Macchia’s.

“There is nothing better for a teacher than to see his students on the road to success,” said Macchia, who was elated when the six former students showed up at the event. “They have all pursued STEM careers and that makes this science teacher ecstatic!”

Brookhaven’s OEP manager, Ken White, summed up the experience as follows: “It is rewarding to see the impact that the DOE and Brookhaven Lab programs have on students. Exposing students to DOE research and introducing them to scientists and engineers from across the spectrum—experienced to new—helps guide them on a path to a great career in STEM. This is just one example of why our educational programs are so important to our nation.”

After receiving his B.S. and M.S. from Rensselaer Polytechnic Institute, Corrao is now employed as a manufacturing engineer for a major corporation that develops tip-to-tail aircraft solutions. Specifically, he works on jet engine assemblies for both commercial and military aircraft.

“This year was special for many reasons. It just worked out that my high school teammates and I would all be home on the same weekend,” said Corrao. “When we received the email from Mr. Macchia telling us that science bowl was that Saturday and the Lab was looking for volunteers, we had to seize the opportunity. Meeting up at the event gave us the chance to reconnect, as well as an opportunity to reflect and evaluate our personal accomplishments as students, friends, and as role models.”

“I think showing the current students that we were in their shoes not that long ago is critical to keeping them engaged and interested in STEM,” added Corrao. “I must admit, I was very impressed by the students' skill level.”

Elijah Mas will earn his B.S. in astrophysics from Yale this May. He is currently conducting research at Yale and is looking for an opportunity to work at NASA, perhaps in a field that mixes analytics with computing software.

“I’m not sure exactly what job I will seek, but I know I will continue to pursue a STEM career,” said Mas. “I also know that I look forward to volunteering at future events at Brookhaven Lab. I really enjoyed interacting with the students that day and encouraging them to explore a career in a STEM field.”

Michael Waldman graduated from the University of Maryland in 2017 and is currently working as an environmental scientist.

“I still remember practicing and preparing for science bowl. I loved that it pushed my knowledge beyond what I learned in class,” said Waldman. “I volunteered so I could help the current contestants have the same opportunity that I had to advance their knowledge in a STEM field.”

Background on the National Science Bowl

The U.S. Department of Energy (DOE) National Science Bowl® is a nationwide academic competition that tests students’ knowledge in all areas of science and mathematics. Middle and high school student teams from diverse backgrounds are comprised of four students, one alternate, and a teacher who serves as an advisor and coach. These teams face-off in a fast-paced question-and-answer format, being tested on a range of science disciplines including biology, chemistry, Earth science, physics, energy, and math.

Since January 2018, more than 9,000 high school students and 4,500 middle school students competed in 65 high school and 48 middle school regional Science Bowl tournaments. The U.S. Department of Energy Office of Science manages the National Science Bowl®, and sponsors the NSB finals competition. The Department of Energy's Office of Science is the single largest supporter of basic research in the physical sciences in the United States, and is working to address some of the most pressing challenges of our time.