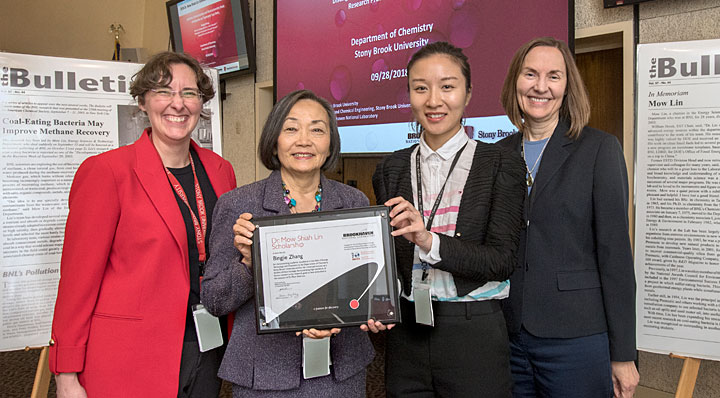 Bingjie Zhang is the recipient of the 14th annual Mow Shiah Lin Scholarship. The Asian Pacific American Association (APAA) at the U.S. Department of Energy’s Brookhaven National Laboratory funds the scholarship, which consists of $1,000 and a plaque, in honor of the late Brookhaven Lab scientist for whom it is named.

Zhang is pursuing a Ph.D. in chemistry from Stony Brook University. Her research centers on harnessing materials that will increase the energy storage capacity and lower the environmental impact of batteries. At Stony Brook, Zhang works in the laboratories of materials scientist and Distinguished Professor Esther Takeuchi, Distinguished Teaching Professor Kenneth Takeuchi, and Research Professor Amy Marschilok. She conducts her research in part at Brookhaven Lab’s Center for Functional Nanomaterials—a DOE Office of Science User Facility—and the Lab’s Interdisciplinary Science Building, using specialized instruments to synthesize and modify battery materials and characterize how these modifications affect battery performance.

“We are very proud of Bingjie and the research contributions that she has made,” Esther Takeuchi said. “The Mow Shiah Lin Scholarship is a wonderful program and we are delighted that Bingjie was selected to receive this significant honor. We are grateful to the Lin family and the Brookhaven Lab APAA for their hard work and dedication to this program.”

Zhang was equally grateful in accepting the award at a ceremony held at Brookhaven Lab on September 28th. “I’ve really enjoyed working at Stony Brook and Brookhaven National Lab and I’m so happy I could get this award,” she said. “I would like to thank my collaborators and advisors; they have helped me a lot in my research.”

Zhang earned her B.S. in Materials Science and Engineering from Donghua University in Shanghai where she was distinguished as being in the top 5 percent of students.

“It’s been a pleasure to give this scholarship annually to such outstanding young scientists,” said Susan Wong, board member of the APAA.

Mow Shiah Lin began his career at Brookhaven Lab in 1975 as a postdoctoral fellow and advanced to co-lead a research team working with an environmental remediation company to use selected bacteria to convert toxic oil wastes, such as used motor oils, into useful products. In 2001, Lin shared an R&D 100 Award, given by R&D Magazine for the top 100 technological achievements of the year, for developing a technology to recover silica from geothermal brine. Lin died suddenly due to a brain aneurysm at the height of his career in 2003, and his coworkers, friends, and family contributed funds to establish the scholarship in his name.

In remembrance of the manner in which Lin began his career, the scholarship is granted annually to a student of Asian heritage with a U.S. student visa who is matriculated at an accredited institution of higher education on Long Island (including Brooklyn and Queens) working toward a graduate degree in environmental and energy technology, biology, or chemistry.

The research facilities at Brookhaven Lab are funded by the DOE Office of Science.