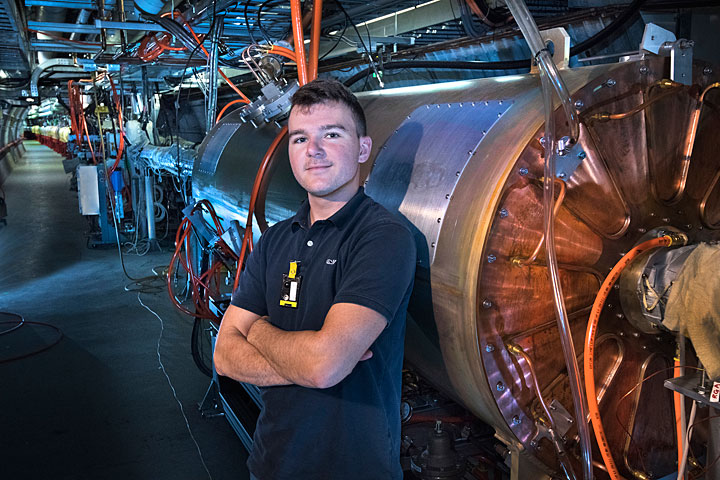 Former intern David Livoti is now a full-time employee in the radiofrequency (RF) group of the C-AD complex, where he's part of a team of technicians that maintains RF systems for the Lab's particle accelerators.

Growing up, David Livoti spent his summers working at libraries and garden centers near his home in Center Moriches. Then, in 2017, he landed his first internship just a few minutes down the road at the U.S. Department of Energy’s (DOE) Brookhaven National Laboratory, as a participant in the Office of Science’s Science Undergraduate Laboratory Internships (SULI) program. He quickly developed a passion for designing and studying the performance of electronics while building devices to measure snowfall amounts in Brookhaven’s Department of Environmental Science. One year later, Livoti is now helping to maintain acceleration systems for the Lab’s particle accelerators as a radiofrequency technician.

“I like the atmosphere here at Brookhaven,” said Livoti, who graduated from Farmingdale State College last December with a dual degree in electrical and computer engineering. “I wanted to be in the research and design field, and I figured what better place to start a career than at a national laboratory where the most advanced research and design is done.”

While interning under the direction of engineer Scott Smith, Livoti and fellow interns developed a machine that monitors snowfall accumulation—an improvement over the standard method of monitoring snowfall. That tedious task required taking manual measurements with a ruler every six hours!

“The conventional method of measuring snow is archaic,” said Livoti, who completed all of the electronics and programming for the new device.

The new device, developed in collaboration with the National Weather Service, has an electronic sensor that operates using sound waves, similar to the way sonar devices measure ocean depths. As snow accumulates, the sensor sends out sound waves to measure the change in distance between itself and the high point of accumulated snow piled up on a retractable table below. When the snow builds up to a certain point, the pre-programmed table tilts downward and the snow slides off, allowing the sensor to start measuring again, adding the additional accumulation to the running total.

“This new, solar-powered device could help scientists determine snowfall rates more accurately, and it eliminates the task of taking manual measurements,” said Smith, who recently submitted the design for a patent. He noted that Livoti played a prominent role in building the device.

“David has an incredible work ethic—he came to the lab early, stayed here late, and was relentless when it came to figuring out why something wasn’t working,” Smith said. “He’s also easy to get along with, and he has a great personality.”

Hoping to continue his work with programming and electronics, Livoti applied for a position at the Lab after finishing his last semester of college. Within one month, he was hired as a technician in the radiofrequency (RF) group of the Collider-Accelerator Department (C-AD).

The 23-year-old now works in the radiofrequency (RF) group of the C-AD complex, where he’s part of a team of technicians that maintains the RF systems. RF systems generate electric fields that control particles circulating in particle accelerators, including the Relativistic Heavy Ion Collider (RHIC)—a DOE Office of Science user facility for nuclear physics research that collides protons and/or heavy ions so scientists can study the building blocks of matter.

As part of the RF group, Livoti is assisting the lead engineers in maintaining and troubleshooting high power RF amplifiers and cavities that are integral parts of the C-AD complex. In addition, he is learning new technologies and conducting tests on solid-state and vacuum-tube amplifiers, as well as learning to program and use devices that control power supplies and monitor the status of other accelerator subcomponents.

Livoti plans to continue this research and someday obtain a master’s degree in electrical engineering. When he isn’t busy maintaining and testing RF systems, he spends his time snowboarding and playing softball in the Lab’s league.