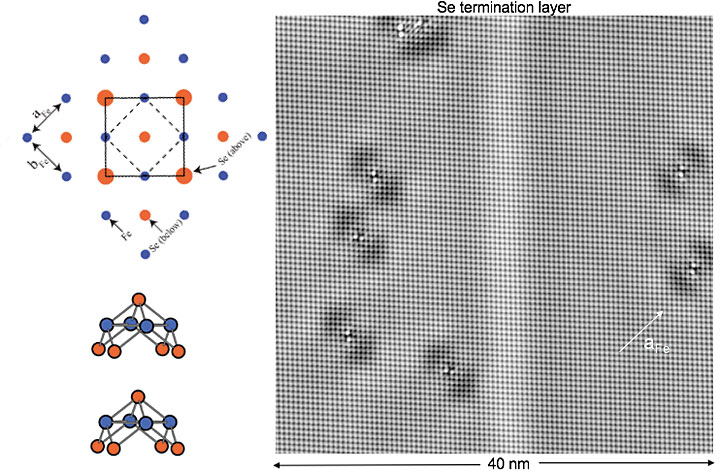 Scientists discovered strong electronic correlations in certain orbitals, or energy shells, in the metallic state of the high-temperature superconductor iron selenide (FeSe). A schematic of the arrangement of the Se and Fe atoms is shown on the left; on the right is an image of the Se atoms in the termination layer of an FeSe crystal. Only the electron orbitals from the Fe atoms contribute to the orbital selectivity in the metallic state.

Two families of high-temperature superconductors (HTS)—materials that can conduct electricity without energy loss at unusually high (but still quite cold) temperatures—may be more closely related than scientists originally thought.

Beyond their layered crystal structures and the fact that they become superconducting when “doped” with atoms of other elements and cooled to a critical temperature, copper-based and iron-based HTS seemingly have little in common. After all, one material is normally an insulator (copper-based), and the other is a metal (iron-based). But a multi-institutional team of scientists has now presented new evidence suggesting that these radically different materials secretly share an important feature: strong electronic correlations. Such correlations occur when electrons move together in a highly coordinated way. 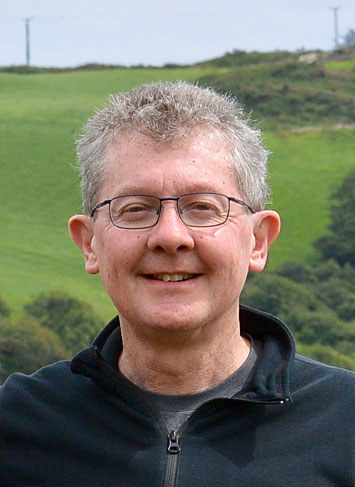 “Theory has long predicted that strong electronic correlations can remain hidden in plain sight in a Hund’s metal,” said team member J.C. Seamus Davis, a physicist in the Condensed Matter Physics and Materials Science at the U.S. Department of Energy’s (DOE) Brookhaven National Laboratory and the James Gilbert White Distinguished Professor in the Physical Sciences at Cornell University. “A Hund’s metal is a unique new type of electronic fluid in which the electrons from different orbitals, or energy shells, maintain very different degrees of correlation as they move through the material. By visualizing the orbital identity and correlation strength for different electrons in the metal iron selenide (FeSe), we discovered that orbital-selective strong correlations are present in this iron-based HTS.”

It is yet to be determined if such correlations are characteristic of iron-based HTS in general. If proven to exist across both families of materials, they would provide the universal key ingredient in the recipe for high-temperature superconductivity. Finding this recipe has been a holy grail of condensed matter physics for decades, as it is key to developing more energy-efficient materials for medicine, electronics, transportation, and other applications.

Since the discovery of iron-based HTS in 2008 (more than 20 years after that of copper-based HTS), scientists have been trying to understand the behavior of these unique materials. Confusion arose immediately because high-temperature superconductivity in copper-based materials emerges from a strongly correlated insulating state, but in iron-based HTS, it always emerges from a metallic state that lacks direct signatures of correlations. This distinction suggested that strong correlations were not essential—or perhaps even relevant—to high-temperature superconductivity. However, advanced theory soon provided another explanation. Because Fe-based materials have multiple active Fe orbitals, intense electronic correlations could exist but remain hidden due to orbital selectivity in the Hund’s metal state, yet still generate high-temperature superconductivity.

In this study, recently described in Nature Materials, the team—including Brian Andersen of Copenhagen University, Peter Hirschfeld of the University of Florida, and Paul Canfield of DOE’s Ames National Laboratory—used a scanning tunneling microscope to image the quasiparticle interference of electrons in FeSe samples synthesized and characterized at Ames National Lab. Quasiparticle interference refers to the wave patterns that result when electrons are scattered due to atomic-scale defects—such as impurity atoms or vacancies—in the crystal lattice. 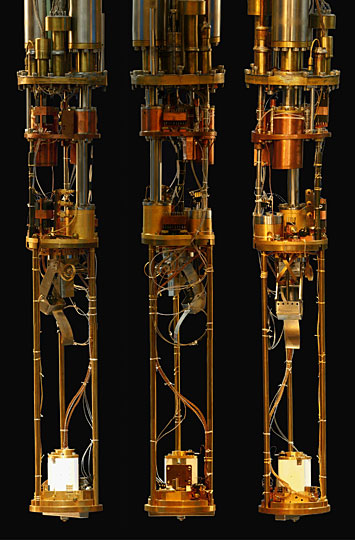 Spectroscopic imaging scanning tunneling microcopy can be used to visualize these interference patterns, which are characteristic of the microscopic behavior of electrons. In this technique, a single-atom probe moves back and forth very close to the sample’s surface in extremely tiny steps (as small as two trillionths of a meter) while measuring the amount of electrical current that is flowing between the single atom on the probe tip and the material, under an applied voltage.

The next question to investigate is whether the orbital-selective electronic correlations are related to superconductivity. If the correlations act as a “glue” that binds electrons together into the pairs required to carry superconducting current—as is thought to happen in the copper-oxide HTS—a single picture of high-temperature superconductivity may emerge.

Experimental studies were carried out by the former Center for Emergent Superconductivity, a DOE Energy Frontier Research Center at Brookhaven, and the research was supported by DOE’s Office of Science, the Moore Foundation’s Emergent Phenomena in Quantum Physics (EPiQS) Initiative, and a Lundbeckfond Fellowship.