The Brookhaven Lab scientists, engineers, and support staff who run the Solenoidal Tracker (STAR) experiment at the Lab’s Relativistic Heavy Ion Collider (RHIC) received one of 17 Achievement Awards presented by Secretary of Energy Rick Perry at the Secretary’s Honor Awards ceremony held in Washington, D.C. August 29. The award recognized the team’s role in enabling the discovery that the nearly perfect fluid created in particle collisions at RHIC is “by far the fastest spinning fluid ever observed.” This discovery required the STAR team, which includes groups at Brookhaven, to perform at a very high level from detector operation and online collision selection to detector calibration and data production and analyses.

The DOE award description notes that the STAR staff “successfully and efficiently operated the STAR experiment under a wide range of conditions, providing precisely calibrated data that enabled this challenging measurement.” The team’s success was a result of their ability to adapt to the more daunting aspects of the experiment. For one, creating an optimal dataset required identifying “good” collisions – those between RHIC’s two beams in the center of the detector – from background signals created by collisions with stray particles farther upstream and downstream. In order to separate the good from the bad, the group developed an online tracking system that then passed the collected information to the Collider-Accelerator Department’s Main Control Room so operators there could make beam steering corrections in real time.

The STAR group also proved to be adept at operating at a high level of efficiency. In usual operation, the main detectors would be turned off when beams are dumped from the collider after use and turned on again once new beams are injected. Instead, the team kept the detectors operational at these times to optimize data collection. 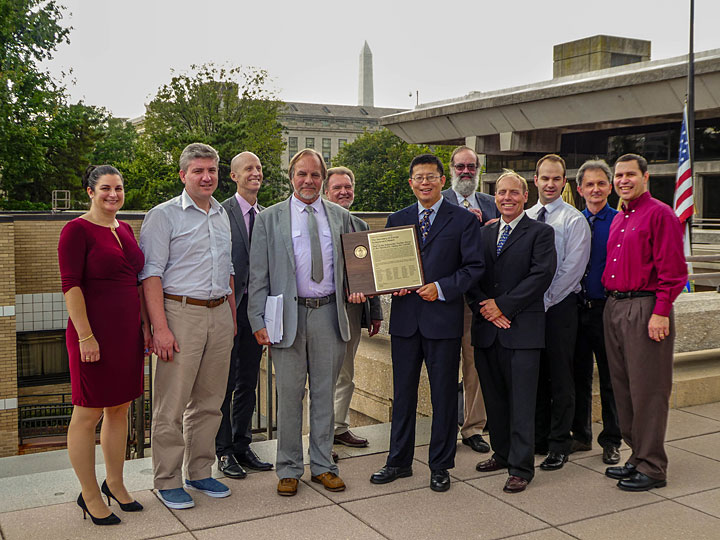 Secretary of Energy Rick Perry addressed the crowd and those being honored at the award ceremony, saying, “It impresses me to no end what the people in this Department accomplish, and it’s a pleasure to salute you today for the outstanding work that you do.” While listing this year’s honorees’ achievements, he added a nod to STAR, saying, “you also enabled the discovery of the fastest spinning fluid,” before going on to call the Department of Energy complex “the most fascinating place in the world.”

The achievement award is among the highest honors given to U.S. Department of Energy (DOE) employees and contractors who provide exceptional service to the Department and the American people. To receive the award, a group must demonstrate excellent cooperation and teamwork. The award given to STAR lists the 50 Brookhaven Lab employees who contribute to operations and research at STAR.

Brookhaven National Laboratory operates RHIC as a DOE Office of Science user facility for nuclear physics research, serving a community of 600+ scientists from 65 institutions around the world who help run the STAR experiment and use its data to study the fundamental properties of matter.

“Receiving this award is a great honor for the Brookhaven Lab members of the STAR team. It acknowledges the group’s sustained and excellent operation and support for almost two decades as an integral part of the scientific collaboration,” said STAR collaboration co-spokesperson Zhangbu Xu. “We share this recognition with everyone in the collaboration, especially the scientists from universities and other laboratories who made essential contributions to the discovery of the ‘vorticity’ of the fluid created in collisions at RHIC.”

The STAR team was specifically cited for the “successful and efficient operation” of the experiment that lead to the revelation that the quark-gluon plasma (QGP) is the most “vortical” known fluid. That is to say, it is the most whirly, swirly fluid, beating out all previous fastest spin records.

STAR physicists recreate the QGP—which once filled the early universe—by colliding particles and analyzing data about the particles that fly out of these collisions. Previous findings have revealed this primordial soup to also have an uberhot temperature hundreds of thousands of times hotter than the center of the sun, and an ultralow viscosity, or resistance to flow—a quality that led to the fluid’s “nearly perfect” label.

The journal Nature published the STAR experiment’s findings on the high vorticity of the QGP in August 2017 and the discovery was named one of the top 100 science stories of 2017 by Discover magazine. The published paper detailed how the team tracked spinning particles and angular momentum to get the groundbreaking measurement.

“This award recognizes the sometimes ‘unsung heroes’ who operate the STAR detector to provide the high-quality data that’s needed by our users around the world,” said Berndt Mueller, Brookhaven’s Associate Laboratory Director for Nuclear and Particle Physics. “This team understands the true essence of operating a key component of RHIC as a user facility to enable ground-breaking discoveries that push the frontiers of our understanding of matter.”

Research at RHIC is funded by the DOE Office of Science.