Quantum mechanical interactions among gluons may trigger patterns that mimic formation of quark-gluon plasma in small-particle collisions at RHIC. 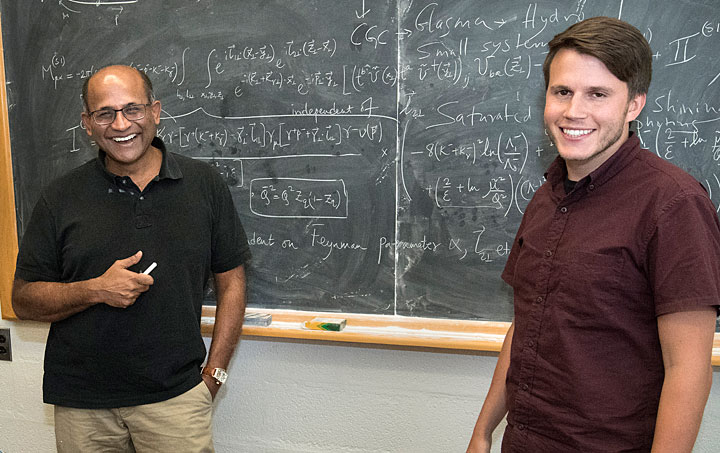 A group of physicists analyzing the patterns of particles emerging from collisions of small projectiles with large nuclei at the Relativistic Heavy Ion Collider (RHIC) say these patterns are triggered by quantum mechanical interactions among gluons, the glue-like particles that hold together the building blocks of the projectiles and nuclei. This explanation differs from that given by physicists running the PHENIX experiment at RHIC—a U.S. Department of Energy Office of Science user facility for nuclear physics research at DOE’s Brookhaven National Laboratory. The PHENIX collaboration describes the patterns as a telltale sign that the small particles are creating tiny drops of quark-gluon plasma, a soup of visible matter’s fundamental building blocks.

The scientific debate has set the stage for discussions that will take place among experimentalists and theorists in early 2019.

“This back-and-forth process of comparison between measurements, predictions, and explanations is an essential step on the path to new discoveries—as the RHIC program has demonstrated throughout its successful 18 years of operation,” said Berndt Mueller, Brookhaven’s Associate Laboratory Director for Nuclear and Particle Physics, who has convened the special workshop for experimentalists and theorists, which will take place at Rice University in Houston, March 15-17, 2019.

The data come from collisions between small projectiles (single protons, two-particle deuterons, and three-particle helium-3 nuclei) with large gold nuclei “targets” moving in the opposite direction at nearly the speed of light at RHIC. The PHENIX team tracked particles produced in these collisions and detected distinct correlations among particles emerging in elliptical and triangular patterns. Their measurements were in good agreement with particle patterns predicted by models describing the hydrodynamic behavior of a nearly perfect fluid quark-gluon plasma (QGP), which relate these patterns to the initial geometric shapes of the projectiles (for details, see this press release and the associated paper published in Nature Physics).

But former Stony Brook University (SBU) Ph.D. student Mark Mace, his advisor Raju Venugopalan of Brookhaven Lab and an adjunct professor at SBU, and their collaborators question the PHENIX interpretation, attributing the observed particle patterns instead to quantum mechanical interactions among gluons. They present their interpretation of the results at RHIC and also results from collisions of protons with lead ions at Europe’s Large Hadron Collider in two papers published recently in Physical Review Letters and Physics Letters B, respectively, showing that their model also finds good agreement with the data.

Gluons are the force carriers that bind quarks—the fundamental building blocks of visible matter—to form protons, neutrons, and therefore the nuclei of atoms. When these composite particles are accelerated to high energy, the gluons are postulated to proliferate and dominate their internal structure. These fast-moving “walls” of gluons—sometimes called a “color glass condensate,” named for the “color” charge carried by the gluons—play an important role in the early stages of interaction when a collision takes place.

“The concept of the color glass condensate helped us understand how the many quarks and gluons that make up large nuclei such as gold become the quark-gluon plasma when these particles collide at RHIC,” Venugopalan said. Models that assume a dominant role of color glass condensate as the initial state of matter in these collisions, with hydrodynamics playing a larger role in the final state, extract the viscosity of the QGP as near the lower limit allowed for a theoretical ideal fluid. Indeed, this is the property that led to the characterization of RHIC’s QGP as a nearly “perfect” liquid.

But as the number of particles involved in a collision decreases, Venugopalan said, the contribution from hydrodynamics should get smaller too.

“In large collision systems, such as gold-gold, the interacting coherent gluons in the color glass initial state decay into particle-like gluons that have time to scatter strongly amongst each other to form the hydrodynamic QGP fluid—before the particles stream off to the detectors,” Venugopalan said.

But at the level of just a few quarks and gluons interacting, as when smaller particles collide with gold nuclei, the system has less time to build up the hydrodynamic response.

“In this case, the gluons produced after the decay of the color glass do not have time to rescatter before streaming off to the detectors,” he said. “So what the detectors pick up are the multiparticle quantum correlations of the initial state alone.”

Among these well-known quantum correlations are the effects of the electric color charges and fields generated by the gluons in the nucleus, which can give a small particle strongly directed kicks when it collides with a larger nucleus, Venugopalan said. According to the analysis the team presents in the two published papers, the distribution of these deflections aligns well with the particle flow patterns measured by PHENIX. That lends support to the idea that these quirky quantum interactions among gluons are sufficient to produce the particle flow patterns observed in the small systems without the formation of QGP.

Such shifts to quantum quirkiness at the small scale are not uncommon, Venugopalan said.

“Classical systems like billiard balls obey well-defined trajectories when they collide with each other because there are a sufficient number of particles that make up the billiard balls, causing them to behave in aggregate,” he said. “But at the subatomic level, the quantum nature of particles is far less intuitive. Quantum particles have properties that are wavelike and can create patterns that are more like that of colliding waves. The wave-like nature of gluons creates interference patterns that cannot be mimicked by classical billiard ball physics.”

“How many such subatomic gluons does it take for them to stop exhibiting quantum weirdness and start obeying the classical laws of hydrodynamics? It’s a fascinating question. And what can we can learn about the nature of other forms of strongly interacting matter from this transition between quantum and classical physics?”

The answers might be relevant to understanding what happens in ultracold atomic gases—and may even hold lessons for quantum information science and fundamental issues governing the construction of quantum computers, Venugopalan said.

“In all of these systems, classical physics breaks down,” he noted. “If we can figure out the particle number or collision energy or other control variables that determine where the quantum interactions become more important, that may point to the more nuanced kinds of predictions we should be looking at in future experiments.”

The nuclear physics theory work and the operation of RHIC at Brookhaven Lab are supported by the DOE Office of Science.