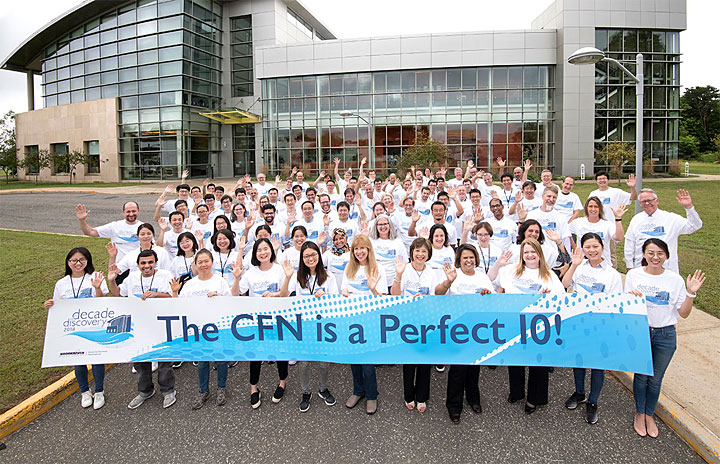 The event featured remarks by current and former Brookhaven Lab leaders and CFN staff, users, and administrators; a ceremony to recognize people who have played an integral role in the first 10 years of CFN; CFN facility tours and nanoscience demonstrations; CFN image contest; and an art gallery with sculptures created from data collected at the CFN (“The Glass Menagerie”).

CFN Director Charles Black opened the event by recognizing the many people and contributions that have all been integral to the CFN’s success during its first 10 years. Many of these people were assembled in the main hall of the CFN—a bright, white atrium that runs from the front lobby through the entire length of the building.

“We’re gathered here, surrounded by the amazing scientific equipment we use to do cutting-edge nanoscience,” Black said. “Honestly, the most important asset of the CFN is all of us, and I don't just mean those who work here, but all those from all around the Lab—and around the world, because it is our staff and users who have contributed to the success of this user facility.”

Gibbs noted how the CFN has made an impact across Brookhaven’s portfolio of science machines and research programs.

“The CFN has become a part of our larger Lab identity, both on its own but also in relationship to all of the other facilities and activities that we do here,” said Gibbs. “It's very synergistic with a number of things we do here, for example, as it was designed to be linked with the National Synchrotron Light Source II but also across the board in chemistry, electron microscopy, certainly computational science, and still more. It really is a remarkable facility and it has become one of the things that we as a national laboratory are known for.” “Over the last decade it has been truly inspiring to see the CFN rise up from a patch of green turf, adjacent to the former NSLS [National Synchrotron Light Source], to become one of the world's leaders at the cutting edge of nanoscale science. The CFN together with the four Nanoscale Science Research Centers have truly realized the decade-old vision of defining an entirely new branch of discovery science, enabled by the sheer creativity and innovation of the CFN staff and user community working together with BES and Laboratory management. CFN has earned worldwide recognition for its novel contributions to nanofabrication, self-assembled materials, and electron microscopy. We'd also like to commend you on the joint UV [ultraviolet] and X-ray science programs that you have developed with NSLS, and that you now greatly expanded upon with the new capabilities available at the new NSLS-II facility.

“We've watched with pride as CFN's user community and scientific impact have continued to grow. We greatly appreciate all that you have accomplished in the last decade and give our heartfelt congratulations to all members of the CFN community. We look forward to continuing our partnership with the CFN to explore future research opportunities at the frontiers of nanoscale science, including quantum information science, and applications of artificial intelligence and machine learning. Congratulations again on your first decade of operational excellence, for the benefit of the CFN user community, and on your stellar scientific achievements.”

Review a timeline of CFN milestones and the full archive of CFN news and videos.