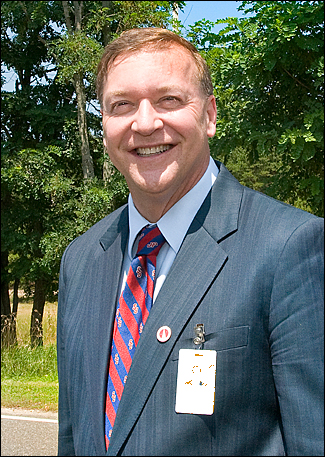 As President of Stony Brook, Stanley becomes the Co-Chair of the Board of Brookhaven Science Associates LLC (BSA), which manages and operates BNL for DOE’s Office of Science. BSA is a partnership between Battelle, a nonprofit, applied science and technology company, and The Research Foundation of SUNY, for and on behalf of the University, the largest academic user of BNL’s facilities. Jeffrey Wadsworth, President and CEO of Battelle, is the current Chair of the BSA Board.

“It is a pleasure to welcome Sam Stanley as President of Stony Brook University and a leader of BSA,” said BNL Laboratory Director Sam Aronson. “On a recent visit to the Lab, he spoke enthusiastically and with vision about the potential for growth across the spectrum of Stony Brook and Brookhaven’s research strengths and mutual interests. For the past 15 years, we have been extremely fortunate in the leadership of Shirley Strum Kenny, whose strong support resulted in many productive research collaborations between our two institutions. Now, we look forward to broadening our alliance with SBU and Cold Spring Harbor Laboratory, to the benefit of all three institutions and our ability to address some of the key challenges facing our nation.”

“I am very pleased to play a role in the leadership of Brookhaven National Laboratory, a true jewel in the crown of the United States Department of Energy laboratories,” said Stanley. “The partnership between BNL and Stony Brook is one of those unique relationships that truly strengthen each side. While we have enjoyed tremendous success, I believe we are poised to do even more as we develop the three-way alliance with Cold Spring Harbor Laboratory, and I look forward to working with Director Aronson and Cold Spring’s President Stillman in moving all three institutions forward.”

The University’s Office of Brookhaven National Laboratory Affairs is run by Michael Marx, a high energy physicist at BNL from 1975 to 1980 who now teaches at Stony Brook and continues to collaborate with BNL researchers.

Said Marx, “The arrival of President Stanley heralds a new era of closer relations between BNL and Stony Brook. The President has already toured BNL facilities, has met its scientific leadership, and is supportive of initiatives in photon sciences, energy and climate research, and in bioimaging.”

Samuel Stanley received his B.A. in 1976 from the University of Chicago and his M.D. in 1980 from Harvard Medical School. The author and co-author of dozens of peer-reviewed articles and scholarly publications, he holds several patents and is credited with substantially advancing Washington University’s research enterprise. As Vice Chancellor, he oversaw a research portfolio of $548 million, including $391 million in National Institutes of Health (NIH) funding. Since 2003, he has also served as Director of the NIH-funded Midwest Regional Center for Excellence for Biodefense and Emerging Infectious Diseases. Stanley serves on the NIH National Advisory Allergy & Infectious Diseases Council; the U.S. Department of Commerce Emerging Technology and Research Advisory Committee and is an Ambassador for the Paul G. Rogers Society for Global Health Research.