Another BNL Connection to Apollo 11 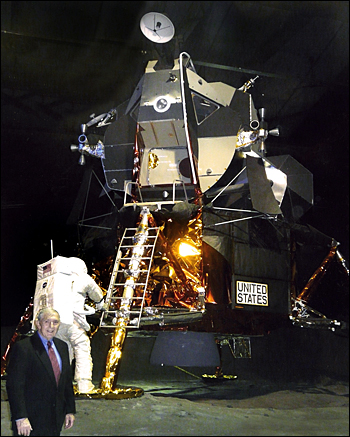 Frederick A. Zito in front of a real lunar module at the Long Island Cradle of Aviation Museum

Frederick A. Zito, who earned a Ph.D. from New York University and an Ed.D. from Dowling College, and holds two U.S. patents and two U.S. copyrights, worked at the Upton site in the late 1970s and early 1980s as a DOE senior project engineer. Prior to that, however, he worked for the National Aeronautic and Space Administration — NASA — as a liaison to Grumman to help develop a guidance and navigation system for the lunar modules, the spaceships that carry astronauts from the command module to the moon’s surface. He also oversaw the system’s installation in the actual lunar module that astronauts Neil Armstrong and Buzz Aldrin successfully landed on the moon on July 20, 1969.

Zito is pictured above in front of a real lunar module at the Long Island Cradle of Aviation Museum on July 25, 2009, during a dinner held in honor of the 40th anniversary of Apollo 11. Several hundred retired Grumman employees who worked on the Apollo project attended the event, which included addresses from Astronaut Rusty Schweikert and Joseph Gavin, Grumman vice president for the Apollo project.