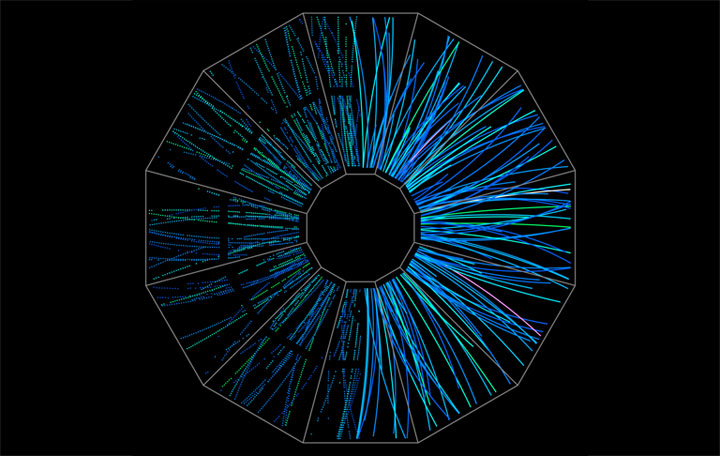 This end view of a low-energy collision event at STAR shows particle tracks on the right and detector "hits" from which tracks are derived on the left. Note the abundance of hits recorded by the detector's new inner sectors, which greatly enhance scientists' ability to reconstruct tracks.

For scientists tracking the transformation of protons and neutrons—the components of atomic nuclei that make up everything we see in the universe today—into a soup of fundamental building blocks known quark-gluon plasma, more is better. More particle tracks, that is. Thanks to a newly installed upgrade of the STAR detector at the Relativistic Heavy Ion Collider (RHIC), nuclear physicists now have more particle tracks than ever to gain insight into the crucial matter-building transition that ran this process in reverse nearly 14 billion years ago.

RHIC—a U.S. Department of Energy Office of Science User Facility for nuclear physics research at Brookhaven National Laboratory—collides beams of heavy particles such as the nuclei of gold atoms to recreate the extreme conditions of the early universe, including temperatures more than 250,000 times hotter than the center of the sun. The collisions melt the atoms’ protons and neutrons, momentarily setting free their inner building blocks—quarks and gluons—which last existed as free particles one millionth of a second after the Big Bang. The STAR detector captures tracks of particles emerging from the collisions so nuclear physicists can learn about the quarks and gluons—and the force that binds them into more familiar particles as the hot quark-gluon plasma cools. 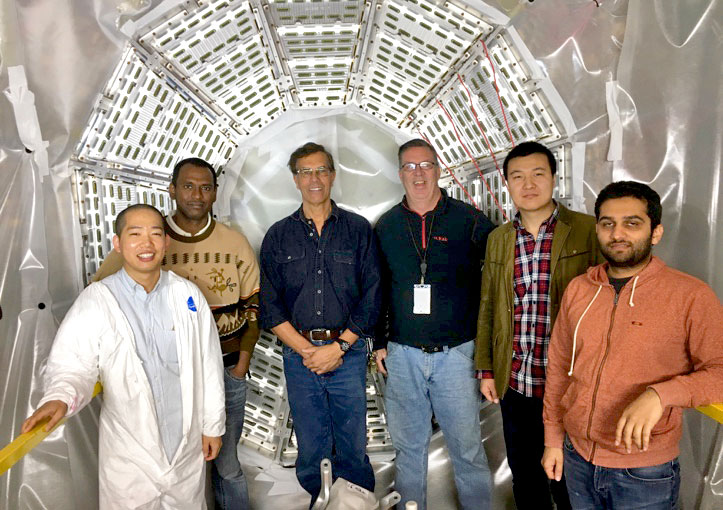 The STAR detector upgrade of the “inner Time Projection Chamber,” or iTPC, was completed just in time for this year’s run of collisions at RHIC. It increases the detector’s ability to capture particles emerging close to the beamline in the “forward” and “rearward” directions, as well as particles with low momentum.

“With the upgrade of the inner TPC, we can dramatically increase the detector coverage and the total number of particles we can measure in any given event,” said Grazyna Odyniec, group leader of Lawrence Berkeley National Laboratory’s Relativistic Nuclear Collisions group, which was responsible for the construction of original STAR TPC and the mechanical components of the new sectors.

One key element of the upgrade was incorporating advanced readout electronics, which have come a long way since STAR’s original TPC was assembled at Berkeley Lab in the late 1990s. 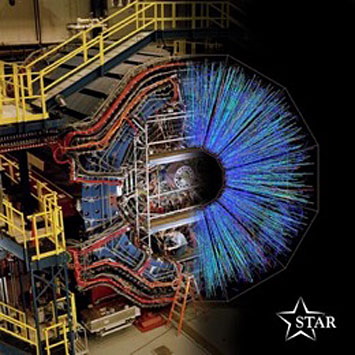 The STAR detector at the Relativistic Heavy Ion Collider (RHIC) is the size of a small house. It captures snapshots of tracks left by thousands of particles created when two gold ions collide. Upgrades to STAR's inner core now allow the detector to track even more particles, including those with low momentum and those emerging close to the beamline.

“Because the readout electronics have gotten much smaller, we now fit many more sensors into the inner sectors,” said Brookhaven Lab physicist Flemming Videbaek, project manager for the upgrade. The electronics also have become much faster. That means the detector can take “snapshots” more frequently to capture more details about individual particles’ paths. More frequent sampling also gives STAR access to particles that were previously lost in the measurements with the detector.

“We are now able to reconstruct tracks that were simply too short for the detector to see,” said Daniel Cebra, a physicist from the University of California, Davis, and a leader of the iTPC effort. “These shorter tracks come from particles that were either emitted at a low angle—meaning close to the beamline in the direction of the colliding ions—or have a low momentum and are thus curled up as they move through the detector’s the magnetic field.”

Capturing these low-angle and low-momentum particles will give STAR scientists much more data to work with as they search for signs of the quark-gluon plasma phase transition—the main goal of RHIC’s Beam Energy Scan II.

Building components for the detector enhancement and getting them assembled in time for the low-energy collisions that started in February was a collaborative effort—and a global one.

A team from the Instituto de Física da Universidade de São Paulo in Brazil designed the main chips for the new signal-readout electronics, which were incorporated into the final assembly by the Brookhaven Lab STAR electronics group. Scientists at Berkeley Lab led by Jim Thomas and Howard Wieman prepared the mechanical parts of the new sectors, including “trimming” the alignment of the aluminum frames to match the design specifications within 50 microns in all dimensions. And much of the Berkeley team’s wisdom and methods were instrumental in guiding the assembly of the sectors’ wire components by STAR collaborators in China. 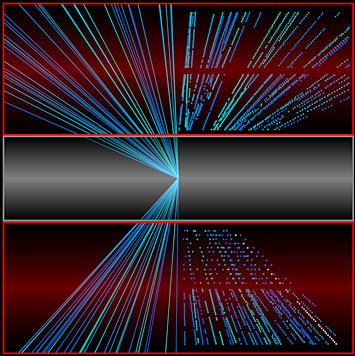 A side view of particle tracks (left) and hits (right) from a collision in STAR, as recorded by the new iTPC sectors (top) compared to the old sectors (bottom). Notice how the new sectors record more hits per track, especially close to the beamline, as well as tracks at more forward and rearward angles (more to the left and right in this view).

Each of the iTPC’s 24 particle-tracking sectors contains 1500 thin wires arrayed in three layers that amplify signals, establish a particle-guiding electric field, and control which tracks get recorded at STAR. These wires needed to be mounted with extreme precision to keep the relative distance between the layers the same—within 10 microns, or millionths of a meter.

“We gained experience by building a small prototype even before the design was finalized, and then when it was, we built a full-size version,” said Qinghua Xu, a physicist at Shandong University, who led the Chinese effort. When they completed the first full prototype in 2017, they sent it to Brookhaven for a test run.

“For the 2018 run, we replaced one of the old sectors with the new prototype, and confirmed that it worked as expected,” Videbaek said. “That gave us confidence that we were ready to build and install the 23 other sectors.”

The team at Brookhaven started installing sectors in October 2018, using a crane and a precision installation tool designed by Brookhaven Lab engineer Rahul Sharma and fabricated with help from a team lead by Olga Evdokimov at the University of Illinois, Chicago.

“It was a bit of a race with time,” Videbaek said. “We installed the last electronics just before Christmas and then, in January, filled the TPC with its argon/methane gas mixture and started taking cosmic data,” he said.

The scientists use cosmic rays (charged particles from outer space)—which come through the roof at a rate of about 150 per second—to calibrate the detector and make sure everything is working.

When the first low-energy collisions came in February, the STAR team was ready with a fully functioning newly efficient detector.

“We’re grateful to everyone on the team who helped to make this upgrade a success,” Videbaek said.

Stay tuned for updates about the science the new iTPC will reveal.