Quick Q&A with a RHIC Ph.D. Student at Brookhaven Lab 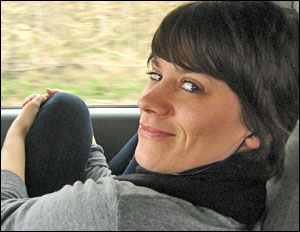 Sarah LaPointe, a Ph.D. student at Wayne State University in Detroit, Michigan, has worked with the subatomic wreckage from particle collisions at Brookhaven Lab’s Relativistic Heavy Ion Collider (RHIC) for 4.5 years. Winner of the Young Scientist Award for best poster at the 2009 annual Quark Matter Conference, LaPointe studies — well, she can explain it:

What do you do at RHIC?

I study particles called D-Mesons. They are produced, along with a “mess” of other particles, after colliding gold ions traveling at nearly the speed of light.

What are you trying to achieve?

D-Mesons are made up of quarks, more specifically a light quark and heavy quark. Heavy quarks are a rare find, so D-Mesons can offer additional knowledge that the mess of the other particles cannot.

Currently, RHIC is the only machine in the world that collides gold ions. Gold is used because of its particle-dense nucleus, and physicists believe that those particles are made up of quarks and gluons. So by colliding gold ions at high energies, we attempt to momentarily free the quarks and gluons, catching a glimpse of what the universe was like right after the Big Bang occurred.

As I said earlier, heavy quarks are rare in these collisions, and trying to measure them is challenging. So my discovery thus far has been that my mother was right — patience is a virtue!

I learned about RHIC as an undergraduate at Wayne State University. I was involved in a summer research program for undergraduates, and in preparation, I attended lectures that covered a lot of material concerning RHIC.

That would have to be the first time I saw my particle. After months of running over data it was there, a bump on a histogram. I literally stared at it for a moment or two and then said out loud, “That’s beautiful.”

The majority of the time I work alone, but I get a lot of support from physicists at Wayne State and the STAR Experiment, of which I am collaborator. STAR is made up of 54 institutions from 12 countries. This makes 575 collaborators that I can go to for scientific support.

I would like to thank all of the STAR collaboration for the help and encouragement I have received over the years. I would also like to acknowledge my advisor for his constant guidance and my office mate at Wayne State for her support, scientific and otherwise.