The PHENIX collaboration, one of four experiments taking place at the Relativistic Heavy Ion Collider (RHIC), published three key papers in the January 26 online edition of Physical Review Letters, the premier journal for the physics field. This is a significant accomplishment for PHENIX, and a rare occurrence for any one experiment. 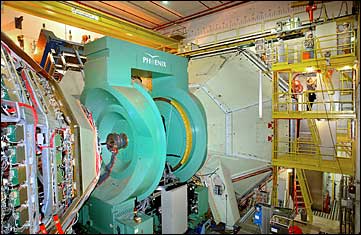 The first paper deals with a measurement of the electrons that are produced during proton-proton collisions at RHIC. These electrons result from the decay of particles that contain either a “charm” quark or a “bottom” quark. Charm and bottom are known as “heavy flavor” quarks because they are heavier than “strange” quarks, and far heavier than “up” and “down” quarks. Using this electron measurement, PHENIX scientists worked backward to calculate the rate at which charm quarks are produced during the collisions. This result is important because it can be used to test theoretical models of charm production in proton-proton collisions. Also, the scientists can use the result as a baseline for seeking new phenomena in gold-gold collisions.

Like the first paper, the second also reports a key measurement of electrons. In this case, however, it applies to gold-gold collisions. Combined with the first paper’s proton-proton result, this electron measurement was used to calculate the rate of charm- and bottom-quark production for the gold-gold case. In turn, this calculation has allowed PHENIX scientists to conclude that these heavy flavor quarks undergo large energy losses as they emerge from the hot, dense matter formed during the collisions. These losses are larger than theoretical estimates. Therefore, this paper’s result is critical because it presents a great challenge to RHIC scientists’ current understanding of gold-gold collisions.

The third paper measures the “flow” of a type of particle created during RHIC collisions, known as the “pi-zero meson.” In this context, “flow” is a property defined by the interactions that a type of particle makes with other particles as they fly away from the collision center. Measuring flow for various particles reveals information about the fluid properties of the matter created during the collisions, and thus helps scientists understand how the matter behaves. The paper also discusses the scientists’ search for the flow of “direct photons” — particles of light created during the collisions — and reports that no evidence of flow is observed. This is consistent with scientists’ expectations, since direct photons are named so because they “shine” directly through the matter without interacting with any of the particles in it.

Links to the papers