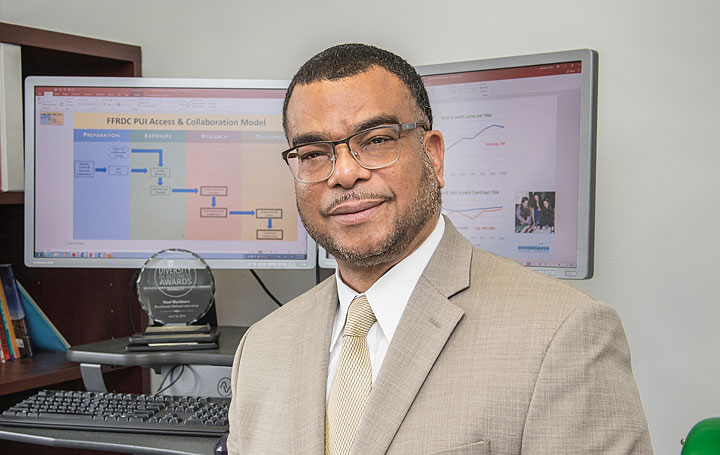 Noel Blackburn of the U.S. Department of Energy's (DOE) Brookhaven National Laboratory was presented with a Diversity in Business Award from the Long Island Business News on April 16. Blackburn is manager of university relations and DOE programs for the Lab's Office of Educational Programs and a member of Brookhaven's Inclusion & Diversity Executive Council. He was recognized along with 21 other honorees "who have made diversity in the workforce part of the norm on Long Island," wrote Long Island Business News Publisher Joe Giametta.

Blackburn was chosen for this award for advancing the success of those from groups traditionally underrepresented in the science, technology, engineering and mathematics (STEM) fields, including minorities and women.

"Noel's outreach is strategic and game-changing," said David Manning, Brookhaven Lab's Director for Community & Stakeholder Relations. "Noel is connecting leading experts of today with those of tomorrow at national labs, historically black colleges and universities, tribal colleges and other minority-serving institutions, public schools, the Ivies, and other private schools. He is growing networks of diverse corporate contacts, too, locally, regionally, and internationally. For all Noel does for the Laboratory and for others, this recognition is well deserved."

So. many. STEM. students.

Brookhaven Lab's Office of Educational Programs hosts more than 30,000 participants for programs and workforce development services each year, including students from first grade to the graduate and Ph.D. levels, as well as teachers and university faculty.

Blackburn designs, implements, and manages a $4-million suite of internship and workforce development programs, primarily for students and professors at the college level. These programs are an important part of Brookhaven Lab's strategy for inclusion and diversity. Blackburn has supported and mentored many who have gained increased access to federal research facilities across DOE's national laboratories, developed relationships with experts in their fields, attained doctoral degrees, and secured millions of dollars in research grants.

"Noel’s passion for inclusion and diversity has yielded an impressive level of underrepresented minorities participating in the Lab’s internship programs—no less than 30 percent every year for the past 15 years," said Office of Educational Programs Manager Ken White. "That means more students among those traditionally less likely to have opportunities in science and engineering are now meeting mentors and discovering career-steering, life-changing experiences at Brookhaven Lab."

Bringing benefits to [and beyond] Brookhaven

"People working together with diverse backgrounds, experiences, and ideas can attack scientific challenges with different perspectives—that accelerates innovation. People working together—that enables discovery," Blackburn said. "Science and technology improve our quality of life, so the more people who are qualified and connected in networks of problem solvers, the better off we will all be. Rising tides raise all ships." 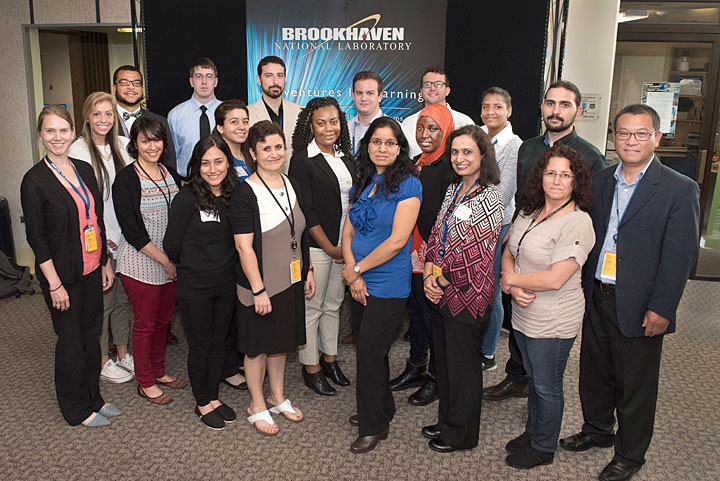 Noel Blackburn (third from left) with participants in the DOE Office of Science's Visiting Faculty Program in 2016. This program works to make faculty and students at institutions historically underrepresented in the research community more competitive while expanding the workforce that is vital to DOE and its mission.

Among those who have benefitted from Blackburn's efforts are five students from the University of Puerto Rico who, after Hurricane Maria, were invited to carry on their research at Brookhaven Lab. All five students were able to avoid delaying their graduation plans and one of them, Luis Betancourt, is now continuing his research as a postdoc in Brookhaven's Chemistry Division.

Blackburn is working with physicist Abhay Deshpande, who has a joint appointment with Brookhaven Lab and Stony Brook University, to develop a research consortium with members of minority-serving institutions for a future electron-ion collider.

The National Synchrotron Light Source II (NSLS-II) is a DOE Office of Science User Facility at Brookhaven Lab. Blackburn was an important contributor in deploying a course online that introduces graduate students to the advanced capabilities available for studying materials' properties at NSLS-II while simultaneously supporting workforce development and helping attract more users to the facility.

Blackburn is collaborating with LAAAMP—"Lightsources for Africa, the Americas, Asia and Middle East Project"—to help attract new users at NSLS-II. He is working with InCREASE to introduce minority faculty and faculty from minority serving institutions to NSLS-II and other facilities across Brookhaven's site. Blackburn also collaborates with Ketevi Assamagan of Brookhaven's Physics Department on the African School of Physics, which aims to increase participation among Africans collaborating in international physics research. And he is growing relationships with Wits University and iThemba Labs in South Africa, and the African Research Universities Alliance and its affiliates.

In addition to his role with university relations and internship programs, Blackburn has worked to grow networks for both innovation and economic benefit in the New York region. In 2018, he was a driving force for the Con Edison - Brookhaven National Laboratory Minority and Women-Owned Business Enterprise (MWBE) Technology Summit.

This event, hosted at Brookhaven Lab, was designed for leaders at the Laboratory and their counterparts at Con Ed and Stony Brook University to meet and explore opportunities for research and development that could address challenges the energy industry is facing, particularly in the areas of energy storage, grid modernization, alternative energy generation, analytics, and reducing safety related risks. The summit also included presentations for MWBE entrepreneurs to learn how to do business at Brookhaven by sponsoring research, licensing technologies, and providing the products and services needed to operate the Lab.

A bit more about Blackburn

Blackburn grew up in Trinidad and Tobago and then moved to New York, where he earned a bachelor's degree in civil engineering and master’s in environmental engineering from City College of New York. In 1999, he joined Brookhaven Lab's Environmental Restoration Division, becoming a project engineer in 2001. He transferred to the Office of Educational Programs in 2004.

Blackburn serves on several advisory boards and is a member of the American Society of Civil Engineers as well as the American Society for Engineering Education. His other honors include receiving a Minority Access National Role Model Award, DOE Outstanding Mentor Award, and a Brookhaven Award, which is one of the highest accolades given by Brookhaven to its employees for distinguished contributions to the Laboratory’s mission.