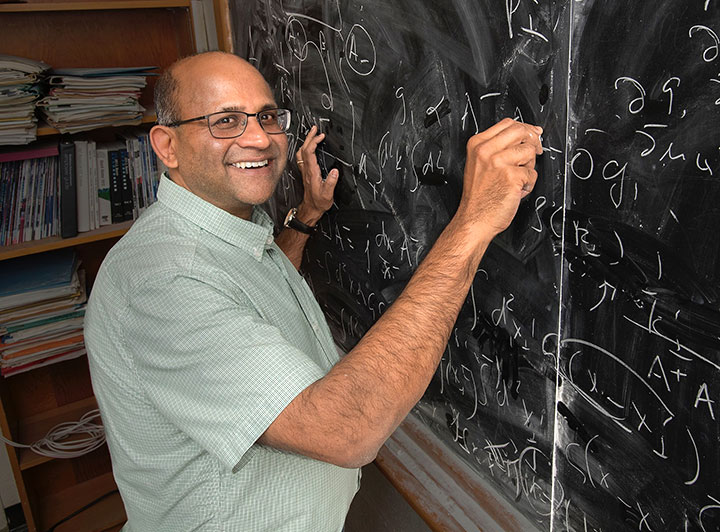 Raju Venugopalan, a senior physicist at the U.S. Department of Energy’s (DOE) Brookhaven National Laboratory, will be recognized as a “highly accomplished Asian American professional” at the Suffolk County eleventh annual Asian American and Pacific Islander Heritage Month Celebration. The event will take place Saturday, May 25, at the Thai Cultural Center in Centereach.

Venugopalan's research at Brookhaven is focused on developing theories to explain and predict the behavior of extreme forms of nuclear matter—including the several-trillion-degree soup of quarks and gluons, known as quark-gluon plasma (QGP), generated in energetic particle collisions at colliders like Brookhaven Lab's Relativistic Heavy Ion Collider (RHIC) and Europe's Large Hadron Collider (LHC). He has also explored the behavior of matter at the opposite temperature extreme, namely in ultra-cold atomic gases. Venugopalan was an early proponent of the Electron-Ion Collider and is actively engaged in exploring the scientific potential of this machine.

For this work, and for his development of the Color Glass Condensate theory of the properties of nuclei at high energies, Venugopalan was a recipient of the 2018 BNL Science and Technology Award. In 2016, Venugopalan received the prestigious Humboldt Research Award from the Alexander von Humboldt Foundation in Bonn, Germany, granted in recognition of a researcher's entire achievements to date, whose fundamental discoveries, new theories, or insights have had a significant impact on their own discipline and who are expected to continue producing cutting-edge achievements in the future.

“I am honored to receive this award from Suffolk County that recognizes my contributions in the field of theoretical physics,” said Venugopalan.

Raju Venugopalan came to Brookhaven Lab as an Assistant Physicist in 1998. He rose through the ranks, receiving a tenure appointment in 2002, and has held the title of Senior Scientist since 2007. From 2010 to 2015 he served as Group Leader of the Lab's Nuclear Theory Group, ranked highest among 62 DOE-supported university and lab groups during that time. Venugopalan took a sabbatical as an Excellence Initiative Guest Professor at Heidelberg University's Institute for Theoretical Physics from 2015-2016 before resuming his current position at Nuclear Theory Group Leader. Since 2009, he has also served as an adjunct professor at Stony Brook University, the institution that granted him his Ph.D. in 1992. Prior to joining Brookhaven, Venugopalan held post-doctoral appointments at the University of Minnesota (1992-94), the University of Washington (1994-96), and the Niels Bohr Institute, Copenhagen (1997-98). He has authored more than 200 scientific papers that have received nearly 20,000 citations. Venugopalan has served on numerous scientific committees, including the U.S. Nuclear Science Advisory Committee. He is a Fellow of the American Physical Society and has received several research fellowships.

The Asian American and Pacific Islander Heritage Month Celebration will feature musical performances, dance, and martial arts, as well as presentation of awards to honorees.