After speeding around the Relativistic Heavy Ion Collider’s (RHIC) 2.4-mile racetrack a few million times at close to the speed of light, the machine’s tightly packed bunches of particles, predictably, start to get “hot.” But neither water nor air conditioning can chill these high-speed beams. Using a complicated technique called stochastic cooling, RHIC physicists recently made a major advancement toward beating the heat – a move that will save researchers money and time in their quest to explore the inner workings of the universe. 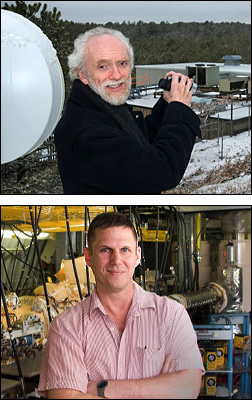 For the first time in a high-energy collider, physicists Mike Brennan and Mike Blaskiewicz, together with engineers and technicians, successfully implemented stochastic cooling to correct the tendency of beam bunches to become fatter as they circulate, a method referred to as transverse cooling.

“Like all charged particle beams, the bunched ions in RHIC tend to spread out, or heat up, as they circulate,” Brennan said. “As the ions spread, the number of protons and neutrons colliding — and the amount of useful data — declines.”

To “cool” the ion bunches and increase the collision rate at RHIC, physicists measure tiny random fluctuations in the position of the beam with devices that send this information to a location ahead of the speeding particles. There, electric fields are generated to “kick” the charged particles back toward their ideal positions.

Although this approach has been used in specialized, low-energy accelerators, BNL physicists were the first to make it work at high energy with tightly bunched beams. The first demonstration of the technique occurred two years ago, as RHIC beams were cooled in the longitudinal direction to compensate for the tendency of bunches to lengthen as they circulate. It’s predicted that combining the new transverse cooling system with longitudinal cooling in both rings — along with some additional equipment — could increase collision rates overall by 500 percent.

“Stochastic cooling is going to have a real impact on the experimental program, allowing for a much more detailed examination of rare processes involved in the early universe,” said Wolfram Fischer, head of the Accelerator Division in the Collider-Accelerator Department.

This effort, part of the RHIC-II science program, also is quicker and an order of magnitude cheaper than the system that was originally proposed to increase collision rates — electron cooling. That project was estimated to cost about $95 million, compared to about $10 million to implement stochastic cooling.

The full stochastic cooling system is scheduled to be in place by 2011.